The Ministry of Health expects a resurgence of covid-19 during the influenza season.

The number of patients who have recovered from the SARS-CoV-2 virus is 300,254. One million 26,294 people have been studied, according to the Health Ministry.

The three states currently registering an increase in the number of people who have taken to the streets and who could be infected are Sinaloa, which is at an orange traffic light, Baja California Sur with a red traffic light, and Quintana Roo, in orange. 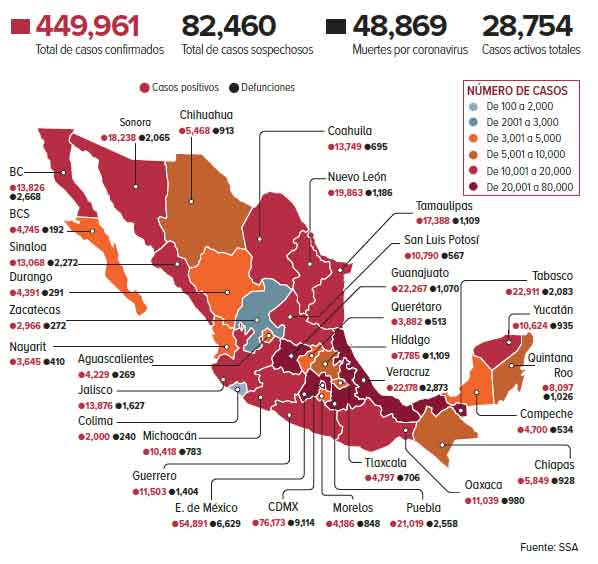 In beds with a ventilator, the national average occupancy is 36 percent. In contrast, Nuevo Leon reported 66 percent, Colima 60 percent, and Tabasco 53 percent.

Covid-19 outbreak in the influenza season
Hugo López-Gatell Ramírez, Undersecretary for Prevention and Health Promotion, reported that during the influenza season – which begins in late September and early October – a resurgence of covid-19 infections is expected.

For this reason, he said that for the last four weeks, the Ministry of Health has been preparing a “Plan for Continuity of Operations of Clinical Care” that will be applied shortly to make up for the delay in services displaced by the contingency. “One of the changes that may exist is that people will be moved to a new address where they are attended to facilitate access to services.” Said Lopez Gatell.

He added that another objective is to improve and strengthen the first level of medical care. The original approach, and that’s what we called the group, was ‘deconversion.’ Still, we’ve realized that the focus isn’t just on deconverting the clinical units, but on reorganizing them to maintain the state of reconversion that has allowed us to accommodate patients with covid because the fall/winter season is coming.

“Remember that we are going to have an influenza season, and most likely a covid-19 outbreak during the influenza season. Both are very similar. There is a chance we will also have a wave of covid cases. So we need to preserve that hospital capacity, but we also need to get back to the capacity to make up for the lag and to take care of people with other conditions,” he explained.