Those who dare to ignore their history are doomed to repeat it.

The historical archives of the United States and the United Kingdom show resistance to the use of facemasks during the Spanish flue.

Who has not received a WhatsApp or e-mail or a video about a  recommendation from supposed physicians that recommend gargling sodium bicarbonate – or salt, or vinegar, or some other common, invisible substance – curing or prevent COVID-19?

Unfortunately, social networks, are a significant source for misinformation with miracle remedies against the coronavirus: from bleach to immune system supplements, to “traditional” Chinese medicine, to products with colloidal silver or derivatives from the human umbilical cord, all sorts of delusional advice have bombarded the population in fear of a pandemic that, so far, lacks a cure and a vaccine to prevent it.

A side effect of the Internet is misinformation. But it also lets us know that hundreds of thousands of people refuse to wear masks in many parts of the United States, a country with an upcoming election, more than 2.1 million infections, and nearly 120,000 deaths from SARS-CoV-2.

But if history leaves any lessons behind, neither technology nor culture wars explain these phenomena: perhaps we should think about human nature because, during the 1918-1919 flu epidemic, the same thing happened.

The most lethal outbreak in history in its second wave – it killed some 50 million people in the world – awakened the ingenuity of merchants who offered new magic products like Veno’s cough medicine or Dr. Cassell’s tablets or simply adapted the marketing of others already in existence, like Borden’s malted milk, which began to be sold as a vitality booster.

Resistance to the use of masks generated everything from ordinances to public campaigns to counteract it, and even brought 2,000 people together at an Anti-Mask League rally in San Francisco, California.

“Wear a mask and save your life”: a Red Cross ad in the Berkeley Daily Gazette. “You should wear a mask to protect yourself against the flu, pneumonia, and death but also to protect your children and your neighbor.” 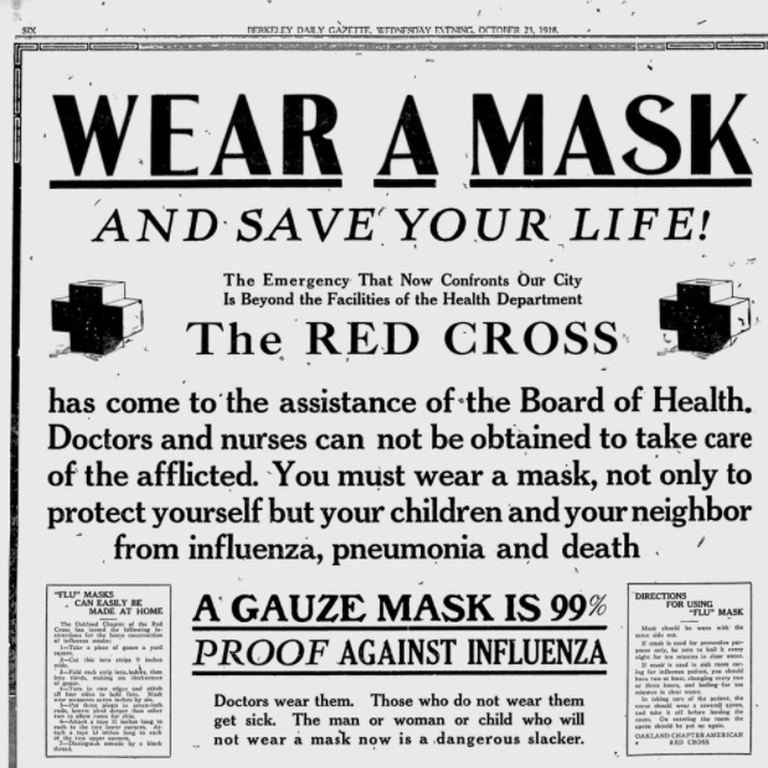 Similarly, as soon as the first spike in the spread of the coronavirus passed, city streets in the United States began to fill with people who, both from enjoying the air on hot days of the year, were exposed to new infections. According to YouGov data, the use of face masks, until April had increased steadily, stagnated in June at less than 70% of people. And the Food and Drug Administration (FDA) has not stopped sending warning letters to those who falsely promote products against COVID-19. 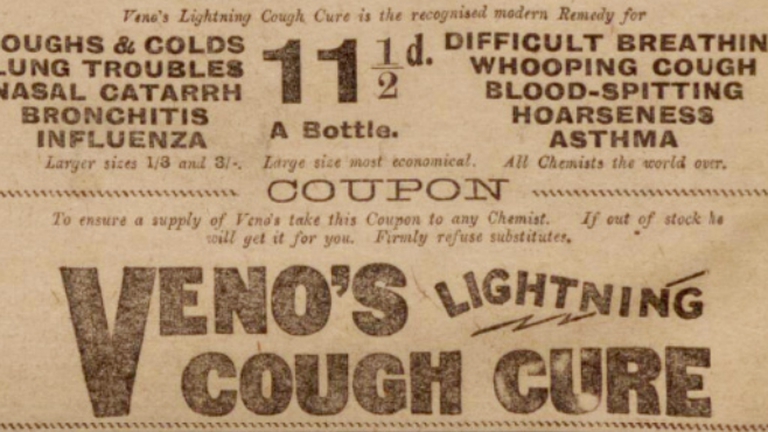 Historian J. Alex Navarro, who participated with the Center for Disease Control and Prevention (CDC) in epidemic preparedness efforts during the George W. Bush administration, is also co-director — with Howard Markel — of the Influenza Encyclopedia, an online encyclopedia of the 1918-1919 flu. With that knowledge, Mother Jones spoke about “the human tendency to rebel against authority, even if it means endangering health.”

At that time, still shocked by the ongoing World War I, there was a sense of patriotism that merged with the fight against the pandemic. “For example, in places where mask ordinances were passed, the Red Cross printed an ad in the newspapers that said, ‘Save a life, wear a mask.”

However, there were “notable acts of resistance, from legal challenges to open disobedience,” Navarro continued. “For example, three weeks after the epidemic in Atlanta, a group of merchants spoke to the mayor, Asa Candler, and said, ‘We need to reopen. He was a pro-trade politician, and he decided unilaterally, against the objection of the health board, that Atlanta would be opened when the epidemic was not over. We don’t know what the course of the outbreak was in Atlanta because the city stopped reporting cases as it had before”.

The San Francisco Rebellion
The company Germ Killer Medicine was looking for salesmen for a “discovery” against “the cold and flu,” which it predicted would be a best-seller. (U.S. Library of Congress)

There are records of orders to wear a mask in Denver, Seattle, and Oakland, among other cities in the western United States, and “they hated them all,” Navarro summarized. But in only one city was there a rebellion: San Francisco. 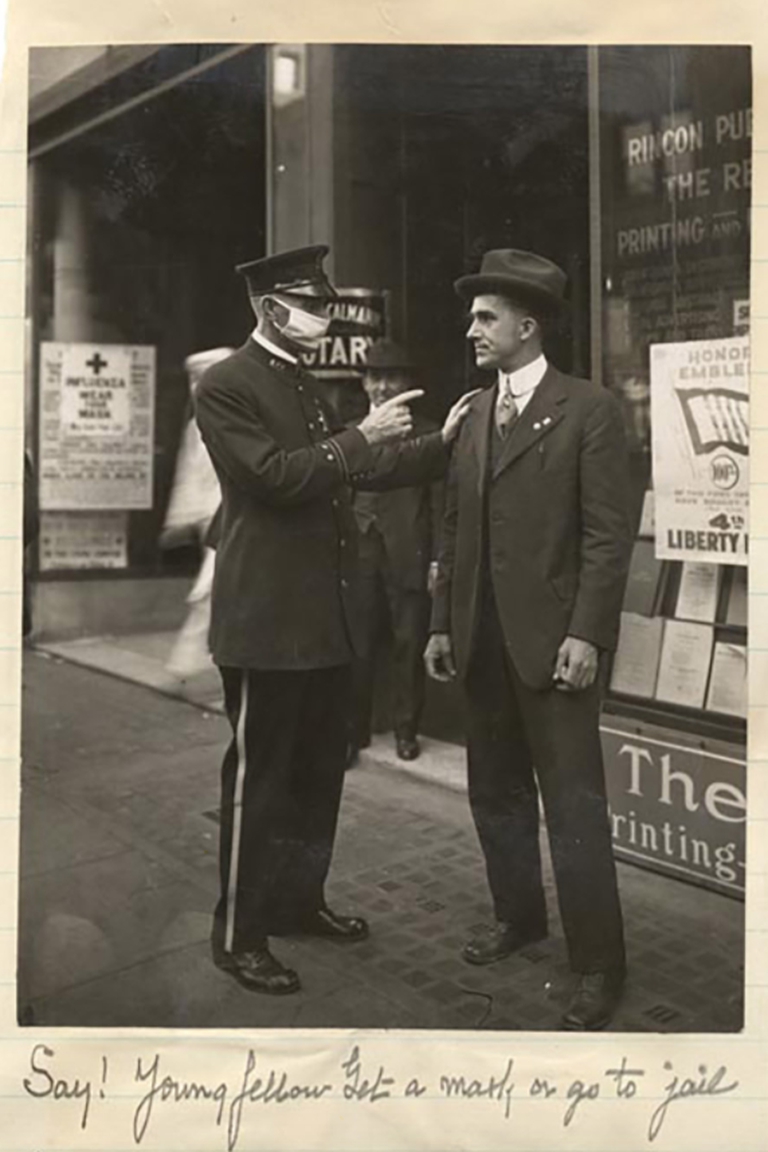 When the first ordinance was imposed, “there were hundreds of people arrested for not using them,” Navarro recalled. The reasons for this cannot be established: they may have been defying authority because they believed the government could not indicate it as an order without violating the Constitution. After all, they believed they did not need them because they thought they were ineffective. After all, they thought they could save themselves the discomfort without being detected, or because they forgot to go out with one, he speculated.

On October 27, 1918, according to the Flu Encyclopedia, police arrested 110 people in San Francisco for not wearing masks or for wearing them inappropriately. “Each was charged with ‘disturbing the peace’ and most were fined $5, which went to the Red Cross”.

On October 28, there were 50 more arrests – five people ended up in prison, and seven others received fines of USD 10, and resistance continued in the following days. “The city jail was filled with people, and the contraventions judges were forced to work late into the night and on Sundays to resolve the cases”. 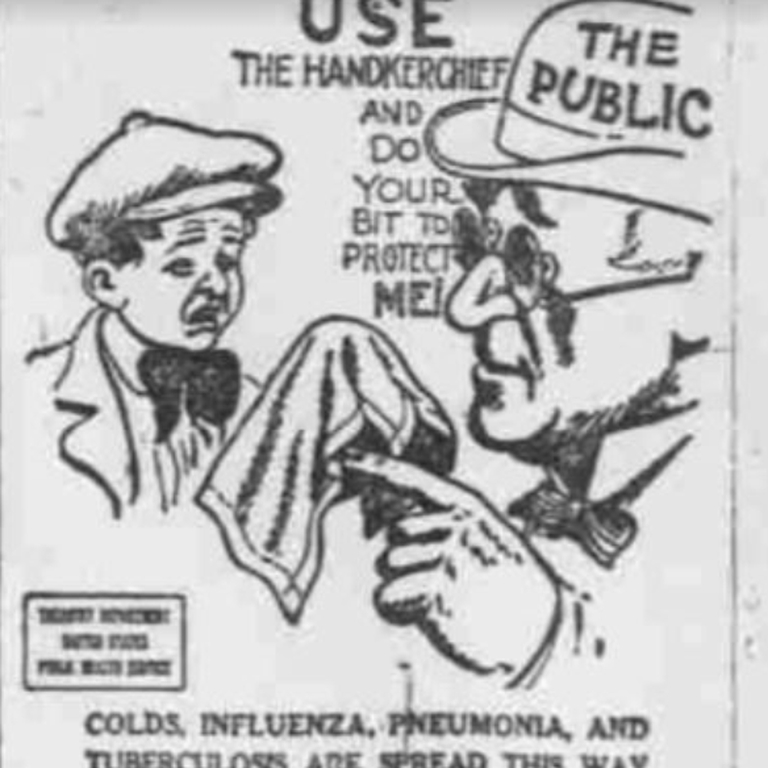 “Use your handkerchief and do your part to protect me”: a message from the public on a U.S. government poster offered free of charge in 1918 to all jurisdictions that wanted to explain that “colds, flu, pneumonia, and tuberculosis are transmitted this way. (National Archives and Records Administration)

“That led to second order for the use of masks, in January 1919, when there was a resurgence of cases, and that time there was contempt,” Navarro added. “People didn’t like to wear masks. And there was even opposition from prominent physicians. A member of the California Board of Supervisors was a member of the Anti-Mask League”.

Dr. Cassell’s pills and other illusions
“Health ruined by flu: a victim of the great scourge explains the splendid health-enhancing effects of Dr. Cassell’s tablets.” (U.S. Library of Congress) 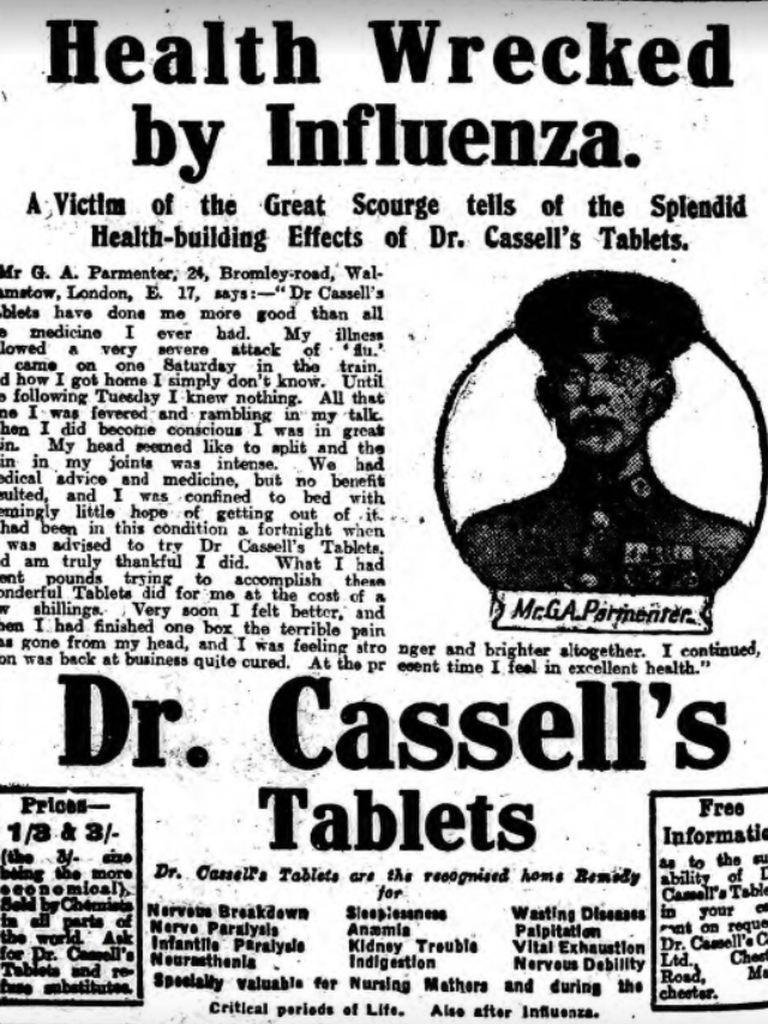 The Wall Street Journal (WSJ) compiled newspaper advertisements during the 1918-1919 flu, with images taken from the U.S. Library of Congress, the National Archives and Records Administration, and the British Newspaper Archive, and the California State Library. “Many companies tried to profit from the epidemic by exaggerating their offers in advertisements,” he said. “‘Some were scams,’ said John Barry of Tulane University’s School of Public Health and Tropical Medicine in New Orleans. Some of them were probably sincere about what they believed.

Milton, a throat antiseptic, promised that “if used as a mouthwash and nasal spray, morning and night, and as a gargle, you will be immune. (British Newspaper Archive)

One company, for example, appealed to the terror of families: children were dying on their way to school, he said, and they had to be protected by their “Indian priest.” And they had to hurry to buy it: the product was already scarce. 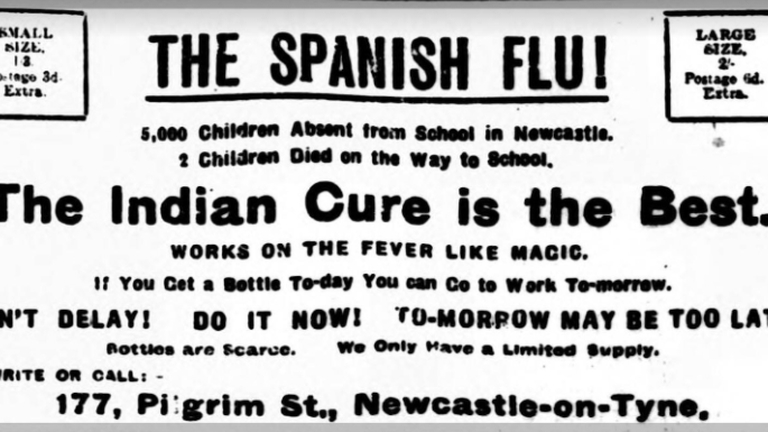 A little more sober were the manufacturers of Milton, an antiseptic for the throat, warned about “the ravages of the flu that spreads everywhere” and the benefits of their product that could make someone “immune.”

The manufacturer of Dr. Cassell’s tablets cited the miraculous effect they had on G.A. Parmenter of London, who felt sick on a train while her fever rose, and she “started talking incoherently. The company also noted that the pills treated the nervous breakdowns and insomnia that had been their original focus before the epidemic forced new marketing.

“The Spanish flu had three waves in the United States: a relatively mild spring and summer, devastating autumn, finally a final wave from November to February 1919 caused by the relaxation of security measures after the end of World War I,” WSJ recalled. “Everyone went out into the street and kissed strangers,” Sandra Opdycke, author of The Flu Epidemic of 1918, told the newspaper.

But there was, however, an awareness that there was a danger of a resurgence. One Arkansas pharmacy warned against overconfidence in September 1919: it offered its customers a health kit to be prepared in case of a new wave. And the owner of The Murfette coffee shop in Brinkley, also in Arkansas, assured his customers that they would not be worried about returning to their premises: hygiene guaranteed that they would not catch it.

“There’s no danger here,” promoted The Murfette’s coffee shop. “Every glass we use is washed twice, under running water, dried and polished.” (Library of Congress)

“The pandemic created a great demand for health workers, legitimate and not so legitimate,” WSJ followed. The Chicago School of Nursing took the opportunity to promote distance learning courses on a larger scale, for all those seeking “a real and respected vocation.” 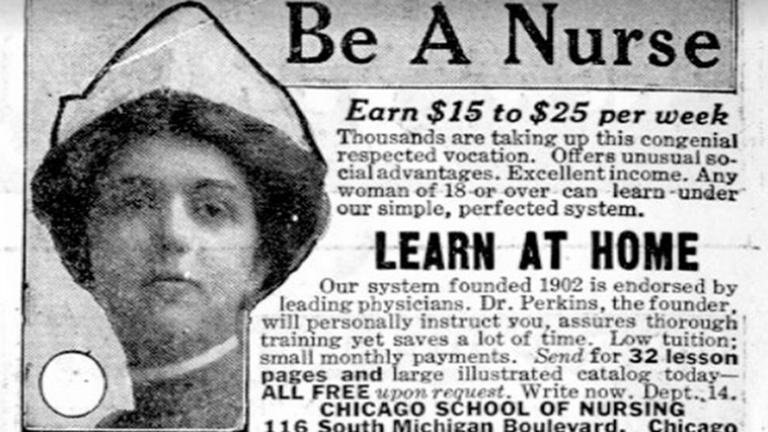 “Be a nurse. Earn $15 to $25 per week. Thousands are adopting this kind and respected vocation,” he invited to use his “simple and perfected system” to “learn from home” at the Chicago School of Nursing. (U.S. Library of Congress)

“Be a nurse. Earn USD 15 to USD 25 per week. Thousands are embracing this kind and respected vocation,” she invited to use her “simple and perfected system” to “learn from home” at the Chicago School of Nursing. (U.S. Library of Congress)

Finally, the advertisements also reflect that the closure of shops, although limited, ended up being forced by the number of people who stopped going to work, either because they were sick or for fear of contagion. “According to Professor Barry, absenteeism reached 60% in the shipyards, for example,” explained WSJ. “The New York Telephone Company asked its customers to limit calls to a minimum so that operators who were still going to work could deal with essential communications. 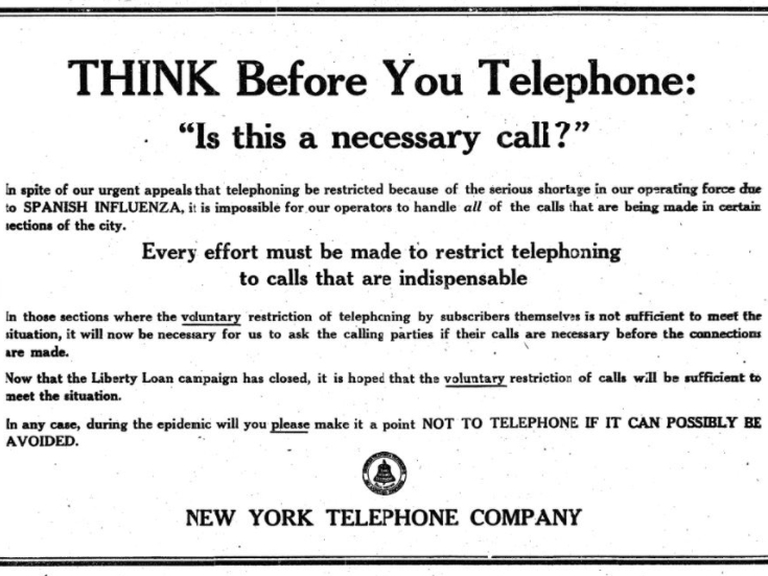 “Think before you use the phone: ‘Is this call necessary?’” Faced with “a severe shortage of our operator workforce due to the Spanish flu,” the New York Telephone Company requested: “Every effort should be made to restrict phone use to indispensable calls. (U.S. Library of Congress)