The draw would be for 6 million tickets (cachitos) of $500 pesos.

CDMX (Times Media Mexico) – AMLO is known for his absurd statements, but this time, he has outdone himself.

Today in his morning conference, President Andrés Manuel López Obrador explained that he has come up with five options for the sale of the presidential plane ‘José María Morelos y Pavón’. One of them is by means of a raffle through the National Lottery.

When asked who had the idea for this ‘raffle’, the president said he would not give details, but that it was the government’s idea.

“A raffle of 500 pesos, 6 million tickets –‘cachitos in Spanish’–, in the National Lottery. I explain (…), it would be given to the one who wins the plane already included a two- or one-year operation service” (SIC) mentioned the president as one of the proposals for the sale of the presidential plane.

Last Tuesday, the government announced that the plane will return to Mexico and will be displayed alongside other aircrafts that will be auctioned in an effort to get them sold. 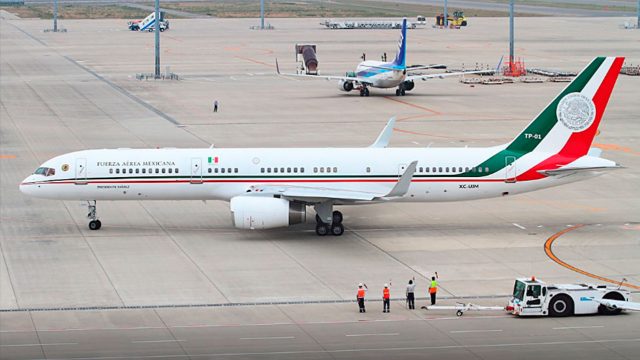 AMLO explained that a second option was the two people interested in the purchase, and one of them offered $125 million dollars for the plane, however, according to the appraisal of the United Nations (UN), the plane is worth 130 million dollars, and it cannot be sold below its price.

The third option is a ‘barter’ proposed by Lopez Obrador to Donald Trump. The airplane in exchange for the equivalent of its price, in medical equipment, ie, ambulances, tomographs, X-ray equipment, among others, to be used in public hospitals.

“A fourth is the sale of the aircraft in 12 equal parts to some non-disclosed national companies, and we have already two offers”, AMLO said.

“The fifth is to rent the plane per hour, under the Mexican Air Force administration. According to the president, the operation of the plane per hour is $15,000 dollars, not considering the cost of maintenance.

On December 3, 2018, the plane left the Mexico City airport for the Logistics Airport in San Bernardino, California.

The aircraft, a Boeing 787-8 of the Dreamliner series, was purchased in November 2012 and was delivered until February 3rd, 2016. In two years and 10 months of service it completed 214 flights in and out of the country.

According to the Andres Manuel Lopez Obrador government, the Boeing 787-8 has a maximum capacity of 80 passengers and during the administration of Enrique Pena Nieto flew a distance of over 600 thousand kilometers.