The Yucatan Peninsula holds archaeological treasures yet to be discovered

The people who live in the Yucatan Peninsula, integrated by the Mexican states of Yucatan, Quintana Roo and Campeche, have the belief that the soil of the region is so flat that behind any mound or hill there is a great probability to find archaeological remains, and many times this is the case alright.

The rural community of Dos Aguadas, which belongs to the municipality of José María Morelos, in the Maya zone of Quintana Roo, is a clear example of this situation, here most locals not only have to guard their land but they also have to protect what lies beneath the lush vegetation.

Dos Aguadas is located very close to the so-called Punto Put, which is where the states of Campeche, Quintana Roo and Yucatán come together, which make up the Yucatan Peninsula along with Belize and Guatemala.

At least seven families living in this community have “mounds” in their backyards that have been partially explored and kept under strict surveillance to prevent looting, as they seek to develop ecotourism projects.

No person outside the village can go to the pyramids without the company of the inhabitants of the place because they also warn that there are many poisonous snakes that are considered by the locals as guardians that keep away anyone who arrives with bad intentions.

“Nobody can live in this place because it is owned by the nation, we can not touch it, we can not live in it, so we want to turn the place into an archaeological project, so tourists can visit the site, “said Santos Tut González, one of the inhabitants of Dos Aguadas.

During a tour of one of these sites, hidden under dense vegetation composed mostly of trees and plants that have taken root among perfectly sculpted blocks of stone, the villagers talk about the things they have found inside the pyramids.

“There is something like a small cave in our backyard, it is covered with plants, but it looks like it used to be a room, or a little house, no one has ever tried to enter, out of fear, because you do not know what can be inside, these are ancient constructions, well-worked stone, everything is well done,” the man added.

Although they do not show them openly, locals also refer to perfectly preserved artistic pieces found inside these pyramids such as plates, vessels and other ornamental pieces.

One of the main attractions of the Dos Aguadas pyramids, according to the locals, is that these preHispanic ancient buildings are seemed to be connected by a network of underground tunnels.

In addition to the pyramids that have been partially explored, the inhabitants of the town recognize that other vestiges that were inside the community and that at the time did not know what they were, were used to build the perimeter fences of a school and some private homes.

At the entrance to the house of Santos Tut González there are two pillars of carved stone, they were on the property when he acquired it more than 40 years ago.

“Those stones were here when I arrived at this place 40 years ago. The man who sold me the house told me that he got them at the edge of the hill, he placed them in the main gate and they have been there ever since, it is clearly a work of the ancient Maya, “he explained.

According to data from the National Institute of Anthropology and History (INAH), more than 2,200 archaeological remains have been documented in Quintana Roo, but because of their size and characteristics only 13 are registered in the national catalog of archaeological zones and are open to the public. 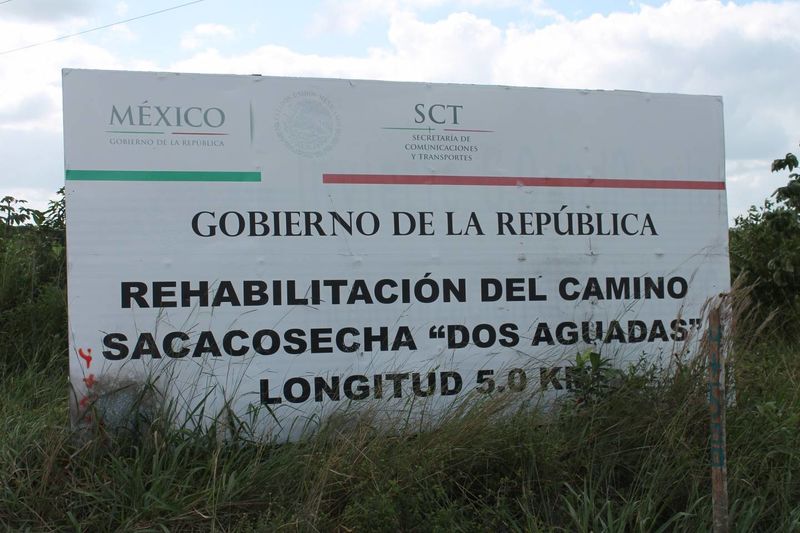 Adriana Velázquez Morlet, INAH delegate for Quintana Roo pointed out that in the Yucatan Peninsula it is very common to find all kinds of archaeological vestiges in empty lots, patios and plots. She acknowledged that there is a false belief that landowners could lose their property if they report these findings.

“There is no problem, the people who have a plot of land will not lose it, they will not be expropriated, the only thing the INAH does is, if they are going to do some work or modification, we tell them where they can build and we give them recommendations to keep the preHispanic remains in good conditions “he explained.

“In regard to real estate, we have two options, one if you want to donate the land, and two if you want to register the plot, and the second case, we do the registration, we rule on authenticity and the owner can keep the property,” she said.

Velazquez Morlet explained that the most common are “albarradas” – or perimeter walls that are built of stone – and residential mounds.

“In the southern area there is a huge amount of Maya vestiges, there are also other types of albarradas, housing mounds, practically everywhere, there is no ejidatario that does not have an archaeological element inside his property,” she stated.

In addition to the great Maya cities such as Tulum, Coba and Kohunlich, all within Quintana Roo, various archaeological investigations have shown the presence of Maya settlers throughout this territory.

TYT Newsroom with information from efe.com