On April 19th at 7pm Noho Casa del Arte will be hosting a unique art event at their location in Alcalá Martín.

Stephanie Carmon will also be launching her MID CityBeat blog and website at the event. MID CityBeat is a website dedicated to what is happening in the city and who is making it happen and will feature the articles from her column in The Yucatan Times as well as updates, videos and writings of the cool events, places and gatherings in the city.

MID CityBeat Facebook is live now and you can check it out here: MID CityBeat

The event at Noho will be an incredible night of art, design, music and cuisine. Don’t miss it! Last year Soho Galleries opened NOHO-Casa del Arte, an elegant space from the 1950’s, that offers an appreciation of art from a unique perspective and a meeting place for art lovers to gather together and enjoy. NOHO has been planning an unprecedented project for quite a while. Combining fashion, art, cuisine and music. 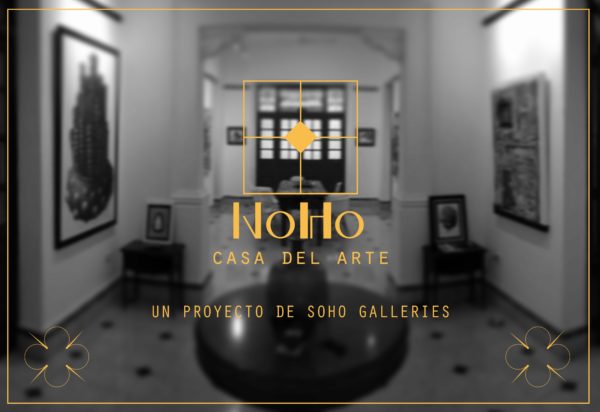 El Jardin Escondido (The Hidden Garden)  promises to delight your senses through color, texture, melody and flavor.  Andy Warhol predicted an inevitable phenomenon, declaring that shops would become museums and that all museums would become shops. These secular temples would be a hybrid of art, fashion and architecture, and are the new meeting places for traditional ideas and trade.

Giorgio Armani says: “Of course, fashion is art. The relationship between these universes is very close. Both are means of expression of great power, which create objects not only beautiful, but also capable of moving. ”             NOHO is looking forward to seeing you on Thursday April 19th at 7PM, we invite you to attend dressed in white clothes and ready to be part of a spring night in the Hidden Garden. Admission is free, limited space. RSVP is required: info@sohogalleriesmx. 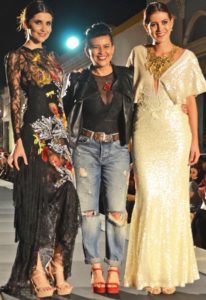 Originally from Campeche, Kika’s interest in design started at an early age.  Her family instilled in her a taste for designing embroidered garments and accessories of haute couture, reflecting the traditions of Yucatecan artisans.

Today, Kika has formed a team of nine Yucatecan women who design and embroider accessories. This embroidery tradition allows them and their families to earn a livelihood while keeping the tradition alive.  Kika’s brand and designs are recognized by the International Fashion Market.  You can find her designs in fashionable stores in Mexico, Colombia, Bolivia and European countries. 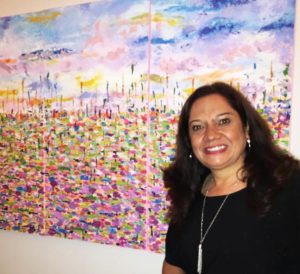 Originally from Jalisco and graduated from La Esmeralda, her career in painting has transported us to places.  She has created magical, churches adorned with green, red and yellow confetti, suns and moons that are seen behind colorful mountains, watermelons that radiate life and for this exhibition, bursts of sky and flowers that reflect a hidden spring garden.  With this unique style, Argelia has captured the essence of Mexican traditions. Her free and precise strokes transmit joy and the character of the Mexican people. Argelia has exhibited her work throughout Mexico, Latin America and the U.S. 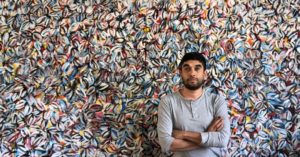 He was born in Mexico City on June 10, 1987. He is an innovative visual artist who has an extensive clientele both nationally and internationally. Jorge has exhibited in Art Basel Miami and Art Basel in Switzerland. His work is shown in galleries in the United States, Mexico, Latin America and Europe.  Jorge has been a featured artist at at Soho since 2011 and at only 30 years of age, he is a favorite artist among art collectors in Mérida. Jorge in involved with helping the community as well and has donated his works to organizations such as “Brazos Abiertos”. 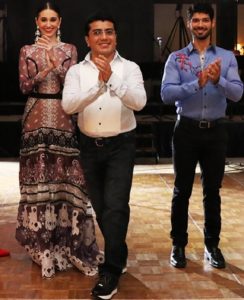 Ayuso has focused on cutting edge guayabera designs for men for over 20 years. His brand Azul is respected and recognized globally. It was created to bring an avant-garde and innovative alternative to traditional Yucatecan clothing. Aldrin uses the finest fabrics to create his unique designs and firmly believes in constant renewal and evolution adapting to new trends while preserving the cultural traditions.