Come to the Yucatan…

Standing barefoot on a wooden jetty on Mexico‘s Yucatan Peninsula, I am being helped, one leg at a time, into an upside-down life jacket.

Once I’m strapped in, it looks like a boxy, neon nappy. But our guide says it’s the best way to travel this freshwater lazy river. Worn like this, we’re vertical in the water rather than sitting in it.

The warm and clear river, the colour of a turquoise Tiffany gift box, holds us gently as we are swept along. It’s as calming, meditative and peaceful as a flotation tank, but much better for you because you’re in sunshine, in motion and in nature. 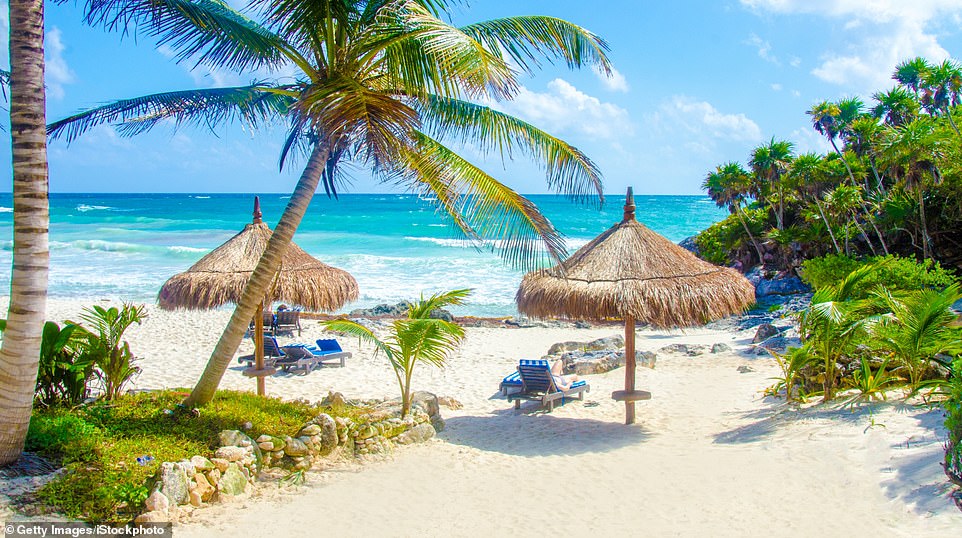 The Daily Mail’s Kate Johnson journeyed to Mexico’s Yucatan Peninsula and skipped trendy Tulum. Above, an example of the beach scenery in the area

The river is man-made: the Mayans dug these narrow canals to link the lagoons and create trade routes to the Caribbean hundreds of years ago. We’re in the Sian Ka’an biosphere (it translates as ‘where the sky is born’), a vast nature reserve covering more than a thousand square miles – that’s roughly the same size as the Lake District.

We’re only ten miles south of the increasingly trendy Tulum, but we could be a world away. To get here, we’ve walked through rainforests (on medium-high alert for howler monkeys); we’ve taken a small motor boat across the lagoons (on high alert for crocodiles); and we’ve explored the ancient ruins of Muyil, a relic of the Mayans from around 300BC.

The 57ft pyramid of El Castillo has a west-facing throne carved into the summit, so that the ruler was bathed in shimmering light when he addressed his people. It’s an impressive example of the lengths people had to go to to look their best, before filters and Photoshop.

Although my shoulders are pink (due to not bringing a shirt and not being allowed to pollute the water with sunscreen), this is the most beautiful, serene swimming experience I’ve ever had – at least since the cenotes (sinkholes) two days before.

It’s not often you get the chance to experience the water like this and both are natural wonders of the world, whether they’re on the official list or not. 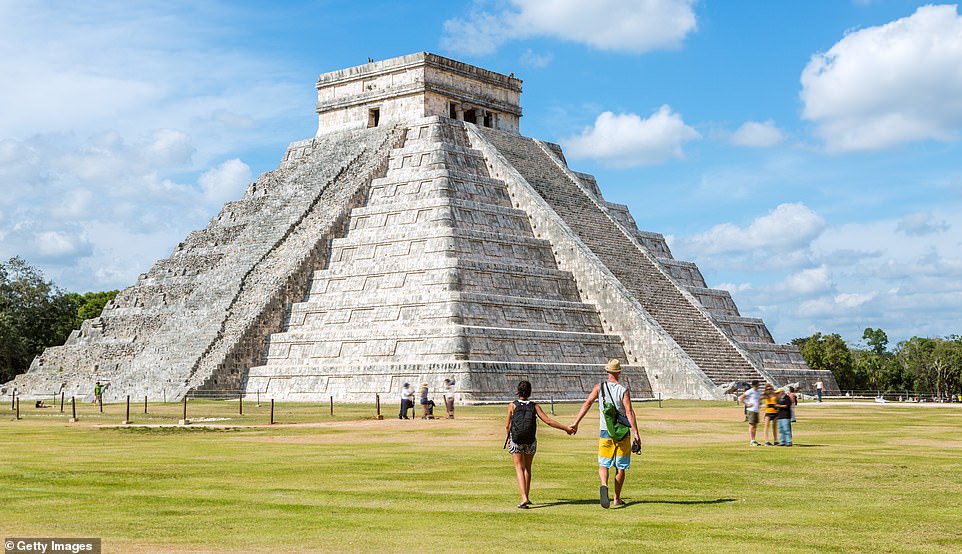 Ancient beauty: Kate discovered that the 57ft pyramid of El Castillo has a west-facing throne carved into the summit, so that the ruler was bathed in shimmering light when he addressed his people

The freshwater sinkholes are natural pits, created by collapsing limestone. They’re so pristine, so fresh, so enticing, it feels like we must be the first people to swim in them.

Our guide says: ‘Watch this – I’m going to show you a magic trick.’ He does some breathing exercises to lower his pulse and then swims to the bottom and turns on to his back. He blows bubbles, and floating up to the surface is what looks like a glittering, flexing, gold hula hoop.

Click here for full article on the Daily Mail