The state agency reported that this measure seeks to ensure that there is no harm to users “while the anomalies are corrected by the concessionaires, taking care that the service is provided on a regular basis during that period.”

(MERIDA, YUC. – IMDUT).- On Wednesday, January 26th, the Institute for Territorial Urban Mobility and Development (IMDUT) withdrew from circulation in Yucatan 15 urban transport buses that no longer meet the necessary standards to provide the service, and 6 more were sent to the “corralón” due to the poor condition in which they were they found.

The measure is taken after this Wednesday morning a bus on the route to Umán caught fire in full motion on Itzaes Avenue, and although there were no injured passengers, it does reflect a reality about the state of the transport units.

This was the second case in just over a week, because on Tuesday of last week a truck from the company Minis 2000 Komchén route burned in the same way when traveling through the Francisco de Montejo subdivision. 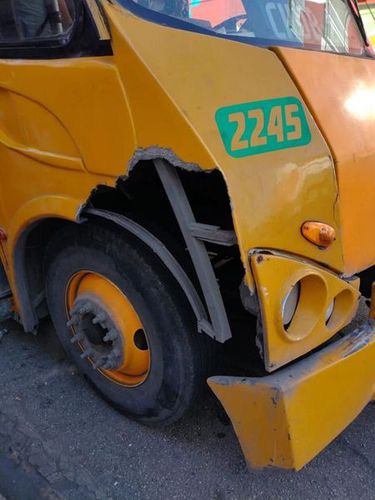 However, the IMDUT reported that since January 20, the routine operation was implemented to review 12 critical points of the transport units on all concession routes.

“As a result of this work, it was found that these units belonging (the 21 mentioned at the beginning) to various companies were found to have various faults such as lack of headlights, damaged or non-existent fenders, facias and fenders, broken or chipped panoramic windows, as well as floors , doors, windows and seats that present a risk to users”.

In a bulletin it was explained that the 15 vehicles that were withdrawn from circulation belong to Transportes Modernos SA de CV, Minis 2000, Líneas Urbe, Unión de Camioneros de Yucatán and Camioneros Aliados, which have routes such as Montes de Amé–Gran Plaza, Dzityá, Umán-Mérida, 69 Poniente and Kanasín Rojo, with the request to carry out the repairs required to continue providing the service.

“The foregoing was carried out without compromising the capacity of operation in those areas and guaranteeing that the population has their transportation needs met, as provided for in the Transportation Law of the State of Yucatan and its Regulations,” says the IMDUT.