The Vice President of the United States, Mike Pence, questions the attitude of the Democratic majority in the House of Representatives on immigration matters, and highlights the work of Mexico.

On Tuesday June 25, the vice president of the United States, Mike Pence, questioned again the attitude of the Democratic majority in the House of Representatives on immigration matters, and highlighted Mexico sending 15 thousand soldiers to the border with Guatemala.

“Mexico keeps its promise and sends 15,000 soldiers to the border to help with the crisis”, the vice president wrote on his Twitter account, a message that in a few minutes the US president Donald Trump re-sent in his own account.

He added that “in the meantime the Democrats will not finance beds for migrant children” and closed his message with the contrasting phrase saying that “Mexico continues to do more than the Democrats in Congress to secure our border and it is time for them to take a step forward“.

The arrival of undocumented migrants to the common border has created a strong pressure that in the case of the United States is reflected in failures to deal with the immigration issue, that has reported casualties, most of them inocent children traveling without adult companions.

Press worldwide have reported that children detained by US border guards are kept without the basic elements for their personal hygiene, such as soap, without forgetting clean clothes and adequate food.

Today Tuesday June 25, the US Congress could vote funds for $ 4.5 billion USD for humanitarian aid destined to the southwestern region of the US border, where the restrictive immigration measures of the Trump administration are most resented. 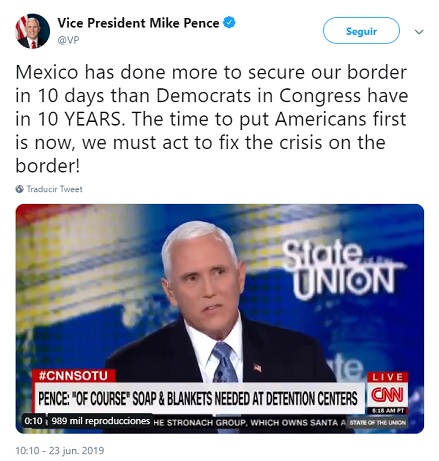 But Democratic lawmakers have expressed fears that the White House will use those funds, if approved, for its “aggressive tactics including deportations that it has promised to start in two more weeks,” The New York Times said.

A week ago, President Trump launched his campaign in search of the reelection, to remain  for four more years in office (2021-2024), where he placed the immigration issue as one of the central parts of his speech.

The Yucatan Times Newsroom with information from Excelsior / Twitter