The hidden secrets of Dzibilchaltún

With an innovative method of his creation, Víctor Hugo Ruiz Ortiz, a researcher at the Peninsular Center for Humanities and Social Sciences (Cephcis) of the UNAM based in Mérida, studies the ancient city of Dzibilchaltún to interpret the hidden message of the Maya city and preserve its cultural heritage and inheritance.

MERIDA Yucatan (Megamedia) – In Dzibilchaltún, which in the Maya language means “place where there is writing on the stones,” researcher Victor Hugo Ruiz applies a Geometric-Architectural Language method. He crosses the information contained in codices with the architecture of the archaeological site.

The master in restoration and doctor in Archaeology explained that architecture is a structured language composed of physics, mathematics, and geometry, which sometimes needs to be completed to understand.

In his research, the university student studied an area made up of the buildings of the central plaza of the archaeological site, buildings 36 and 38, the sacbé (road) one, the Xlacah cenote, the ball game, and the complex known as Siete Muñecas (Seven Dolls). “Dzibilchaltún is a model of the universe.”

According to a press release, the specialist mentioned the relationship he found between the geometric outline of the cross of the Mixtec codex Fejérváry-Mayer and the architecture of the Seven Dolls building. 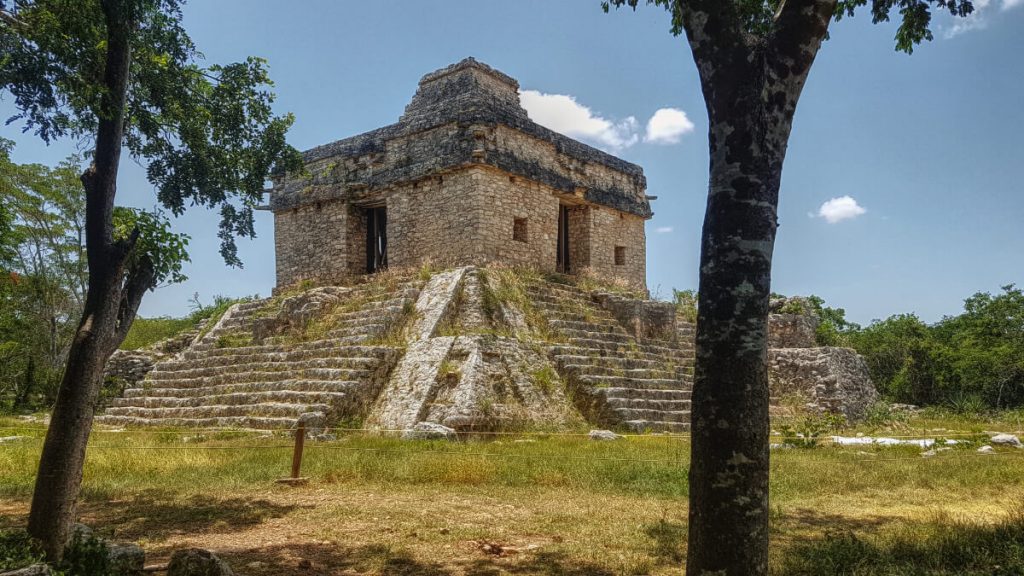 Through the method he has developed, Geometric-Architectural Language, he was able to read in the architecture and space of Dzibilchaltún the same Spatio-temporal principles in the codex.

This led him to develop since 2014 the research project “The protection of the cultural heritage of the Yucatan Peninsula, the case of Dzibilchaltún,” which derived from the book “Dzibilchaltún. Architecture, Space-Time, Eternity”, soon to be published by Cephcis UNAM.

Ruiz Ortiz turned the cross on the first page of that codex into an architectural plan, which later acquired volume and provided information. However, the building and the document have different origins. One is Maya, and the other Mixtec. “What the codex does not say, the architecture tells,” he said.

Based on the Mixtec cross, it is possible to understand that the central chamber of the building of the Seven Dolls should not have had a roof as restored by the American archaeologist Wyllys Andrews. That building -from where it is possible to register astronomical phenomena such as equinoxes and solstices, stars such as Mercury, Venus and Jupiter, stars and the passage of time itself-, originally must have had a roof that was raised, with a cover that was removed and put on, made of palm or other perishable material, to record the passage of the stars through the zenith, including the sun, “giver of life.”

In the prayer of the architectural poetry of Dzibilchaltún, there are several erased words. “We need to do architectural geometric hermeneutics to try to have a complete reading of the site,” he stressed.

The university professor pointed out that architecture is not only a space to shelter human beings from the weather’s inclemency. “It is one of the most significant human expressions that transcends time; Dzibilchaltún is an example.”

At the bottom of page two of the Mixtec codex Fejérváry-Mayer, a pictogram is divided into three parts: on the left side, there is an architectural structure or “pyramid” of six steps, where an ancestor observes seated from the top.

The middle is the body of another ancestor lying down, with his left arm stretched out and his right arm loses downwards, his legs bent, his penis diagonally, and blood gushing from his heart.

Finally, on the right, an image of another character tucked in a niche under the Earth with his gaze turned at 45 degrees. Ruiz Ortiz designed a “circle of time” where he matched the Mayan months with the Nahua and Gregorian calendars.

By following the points indicated by the codex’s pictography, such as the summer and winter solstices, the equinoxes, or the zenith (when no shadow is generated), the document began to “give light.” For example, it found that the diagonal penis of the character points to the zenith of late July and early August.

In the third image, the ancestor would be tucked into a zenith observation chamber, so “one can compute when the zenith begins and when it ends.”

From the circle of time, it is possible to understand why the structure 36 of Dzibilchaltún is rotated, “it is because it obeys the physical and mathematical register of time and space, and it is aligned with the zenith of May, opposite to the nadir that occurs in November.”

The ancient Maya city has a geometric background, parallel to other Mesoamerican cultures; this is explained because architecture, physics, mathematics, and geometry are universal concepts. Few like them achieved the knowledge that our ancestors had, he emphasized.

Even abounded Ruiz, I maintain that Dzibilchaltún has a philosophical approach like Plato’s demiurge, god creator of the world, and author of the universe. “If we apply the Platonic formulas, squares, rectangles, and triangulations are generated, geometric forms born from the observation and understanding of the universe by the ancient Mayas.”

The university professor took the Xlacah cenote as the starting point of the analysis. Together with the polar star, to the north, and the ball game, to the south, “these three points form the first vector (or visual line) that governs the entire geometric architectural outline of the city. Everything in Dzibilchaltún has meaning and meaning,” says researcher Víctor Ruiz Ortiz.

From the Xlacah cenote, you can observe the sunrise on the summer solstice, which coincides precisely with the center of the stairway of structure 36. In the building of the Seven Dolls, the university student discovered the computation of Venus and the 260 days of the Mayan calendar in the steps.

In the sacbé is represented the transit through life (whose line is born in parallel to the vector that is formed during the equinoxes), that takes from birth until the death, when we return to the womb of the Mother Earth, symbolized by the cenote.

Ruiz Ortiz is now working on theoretical aspects of restoration because “we cannot continue measuring our heritage with Western rules. We have to understand it from its essence. We must look for another way to read ourselves, to refer to ourselves, and be very proud of having these ancestors.