Leones’ fan surprised with unique marriage proposal before the game

As usual before each Leones’ game, in the Kukulcán Stadium, a guest throws the first ball.

And on Sunday August 18th, the honor corresponded to Mérida resident Johanna Osorno Cabrera, whois a big fan of the “Leones de Yucatán” by the way.

Upon arriving at the park, she was surprised by a member of the Leones staff entrusting her with that honor.

A little nervous, she accepted. And immediately after she threw the ball, the image of her boyfriend came up on the screen. Her boyfriend was the catcher, but Johanna never noticed that.

William Montes (Johanna’s boyfriend) appeared on the screen, dressed as the Leones’ catcher, he walked to her, got on one knee, and microphone in hand, asked her to marry him in front of the whole attendance, while on the Kukulcan’s screen the question “Will you marry me?” could be read by everybody. 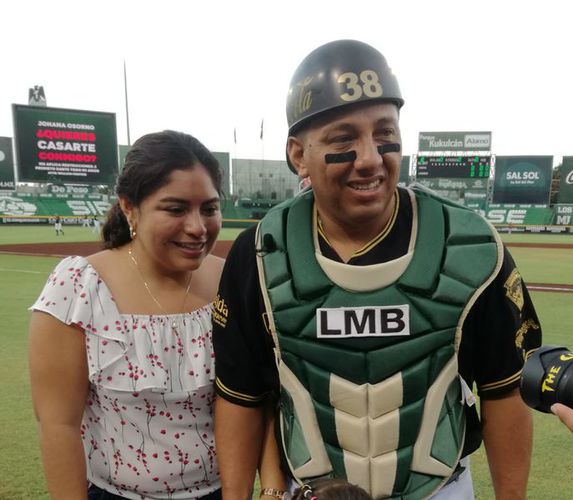 “I had been planning this for quite sometime, and it came out much better than I expected because the Leones’ staff suggested dressing me as a catcher,” said boyfriend William Montes excitedly. 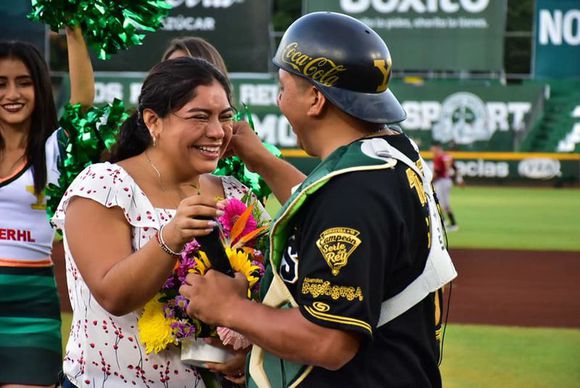 Meanwhile, Johanna Osorno with tears in her eyes, said she never imagined this surprise and was worried because William was supposed to meet her at the stadium, but he was noshere to be found.

Of course, her answer was “yes.” The crowd cheer and the the couple kissed.