Animal migration tracking devices have been used for many years in wildlife biology, conservation biology, ecology, and wildlife management to study animals’ behavior in the wild.

In order to know more about the behavior of the Pink Flamingo (Phoenicopterus ruber), the National Commission of Natural Protected Areas (CONANP), in collaboration with the Pedro and Elena Hernández Foundation, AC (FPEH), placed satellite transmitters to nine adult specimens of this species, in the Ría Lagartos Biosphere Reserve in Yucatán. To date, 19 transmitters have been placed in the same number of flamingos; the first transmitters were installed back in 2017.

Through the use of this technology, important information will be obtained to enrich the knowledge about this species, such as the routes they follow, migration times, preferred feeding sites, and with the marking or banding activities on young specimens, more detailed information about your longevity will be also obtained.

Nine transmitters were placed on the same number of birds, with the support of the technical group made up of CONANP-FPEH personnel, in collaboration with five members of the community surveillance brigade of the Ejido Nuevo Mundo, as they helped to capture and release the specimens, without causing any harm on them.

The weight of the transmitter is less than 2.3% of the body weight of the specimens, flamingos can reach a height of 1.20 to 1.40 m. The male weighs, on average, 2.8 kg and the female 2.2 kg. The time to place the transmitters was between 13 to 15 minutes approximately, always protecting the integrity of the specimens and trying to cause them as less stress as possible. Later they were released in the same place where they were captured. 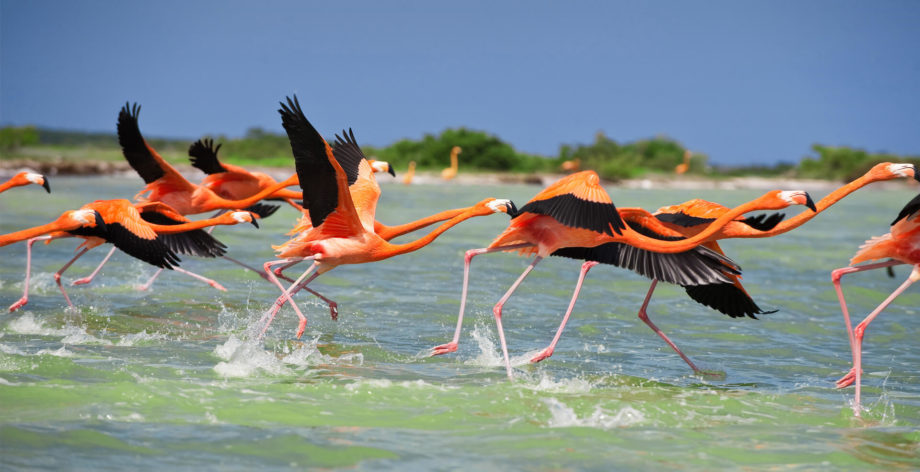 The Flamenco of the Caribbean is distributed along the coast of the Yucatan Peninsula and its main nesting area is the coastal wetlands of the Ría Lagartos Biosphere Reserve (RB), which is a clear evidence of the successful actions implmented throughout the years, for the conservation of these wetlands.

Since 1977 in this Natural Protected Area (ANP), significant work has been done on the conservation of the species, ranging from the restoration of nesting areas, rehabilitation and desolvation of springs or other natural water sources, marking of juvenile specimens and constant monitoring of their migration movements.

These actions are part of the Pink Flamenco Conservation Program that CONANP, in collaboration with civil society organizations, have been successfully carrying out for more than 20 years.

The Yucatan Times Newsroom with information from CONANP