Discouraging forecast for the Caribbean

According to the monthly reports of the Optical Oceanography Laboratory of the School of Marine Sciences of the University of South Florida, intended to provide an overview of the current flowering condition and the probability of future flowering of sargassum for the Caribbean Sea, the conditions for this 2019, are greater than those of last year for the uptake of these marine algae.

Through the reports made by this University of the United States, based on the scientific studies, it was established that in January 2019, sargassum’s total coverage of 344 km2 was shown, compared to a historical average of 32 km2 between 2011 and 2017

The Sargasso Surveillance System based on the satellite of the University of South Florida warns that 2019, will be on a larger scale, which has alerted authorities at the Caribbean countries, including Mexico.

In the report for the month of January (February is still in the process of integration) the extension of flowering in 2019 is still significantly greater than in most of the years from 2011 to 2018 for the Caribbean and the Central West Atlantic. For this reason, they point out that this 2019 is likely to be another important flowering year and for which, the corresponding measures must be taken to address said overflow. 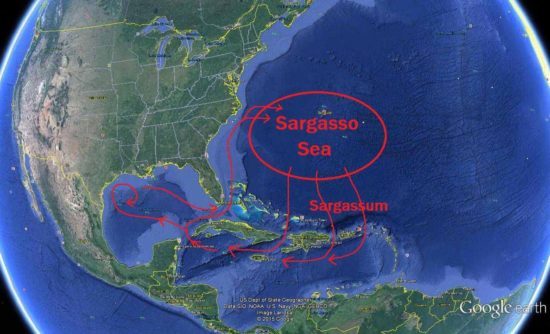 These seaweeds, which float on huge mats in the open waters, do not have a specific trajectory indicating which beach or which country it will particularly arrive to, since it depends a lot on conditions such as winds and tides.

They mention that the area from which the sargasso comes is called the Sargasso Sea, which is not a true sea, but an area far from the coast in the Atlantic Ocean, between the east coast of Florida and Bermuda.

The Sargasso Sea and the sargasso layers that float inside are defined by the dominant oceanic currents: the Gulf Stream to the west, the North Atlantic Stream to the north, the Canary Current to the east and the Atlantic Equatorial Current North to the south, which creates a twist that contains the floating sargassum which gets caught in one of the currents and escapes from the Sargasso Sea.