Once upon a time, The United States of America, represented the land of the free. Today it has become the land of separation, racism and intolerance. This toy represents an attempt to indoctrinate the fertile minds of children with hate and fanaticism. As read on social networks, we would like to share the following thought:
“The worst thing about Trump´s presidency is not what we have learned about him, it is what we have learned about our own family and friends. Most people already knew what kind of person Trump was, we just did not know that so many people we thought we knew, turned out to be just like that”.

A toy about building a wall between the US and Mexico has been launched, to teach children that migrants must not reach the border. “We understand why they want to flee Honduras and live and work in the United States. After all, we are the greatest nation on earth” says the description of the toy.

The company KeepAndBear.com launched a line of toys called MAGA, in order to promote Trump´s failing idea regarding the building of the wall and to prevent the Migrant Caravan from reaching the United States. The toy even embraces Trump’s slogan and claims that without the wall criminals can enter the United States.

“A crowd of 10,000 Central American migrants is marching through Mexico and heading toward El Paso, Texas. The Mexican border agents tried to stop them at their border, but to no avail”, can be read in the description of the toy. “We understand why they want to flee Honduras and live and work in the United States. After all, we are the greatest nation on earth. While there are good people trying to enter our nation, there are also gangs, criminals and terrorists. All those who want to enter our country must enter legally for the safety of all“, says the game.

The MAGA wall toy, assures that the barrier must be built as it “will keep America safe and strong” and the company sales promotion considers it “a great Christmas gift for your children and grandchildren.” 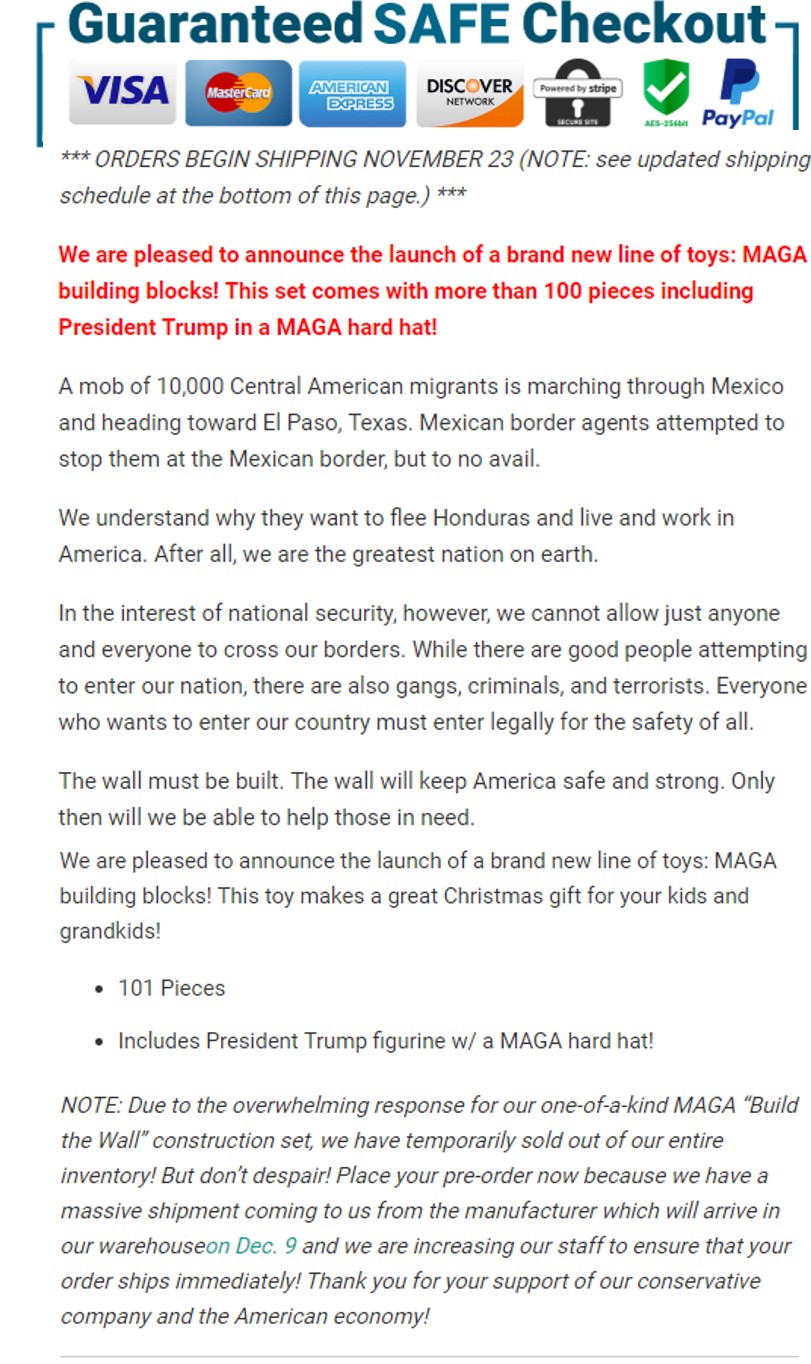 *** ORDERS BEGIN SHIPPING NOVEMBER 23 (NOTE: see updated shipping schedule at the bottom of this page.) ***We are pleased to announce the launch of a brand new line of toys: MAGA building blocks! This set comes with more than 100 pieces including President Trump in a MAGA hard hat!

A mob of 10,000 Central American migrants is marching through Mexico and heading toward El Paso, Texas. Mexican border agents attempted to stop them at the Mexican border, but to no avail. We understand why they want to flee Honduras and live and work in America. After all, we are the greatest nation on earth.

In the interest of national security, however, we cannot allow just anyone and everyone to cross our borders. While there are good people attempting to enter our nation, there are also gangs, criminals, and terrorists. Everyone who wants to enter our country must enter legally for the safety of all.

The wall must be built. The wall will keep America safe and strong. Only then will we be able to help those in need.

We are pleased to announce the launch of a brand new line of toys: MAGA building blocks! This toy makes a great Christmas gift for your kids and grandkids!

NOTE: Due to the overwhelming response for our one-of-a-kind MAGA “Build the Wall” construction set, we have temporarily sold out of our entire inventory! But don’t despair! Place your pre-order now because we have a massive shipment coming to us from the manufacturer which will arrive in our warehouseon Dec. 9 and we are increasing our staff to ensure that your order ships immediately! Thank you for your support of our conservative company and the American economy!

Please boycott this travesty.
The United States of America was built on the following verse and not the bigotry of this company.

“Not like the brazen giant of Greek fame,
With conquering limbs astride from land to land;
Here at our sea-washed, sunset gates shall stand
A mighty woman with a torch, whose flame
Is the imprisoned lightning, and her name
Mother of Exiles. From her beacon-hand
Glows world-wide welcome; her mild eyes command
The air-bridged harbor that twin cities frame.
“Keep, ancient lands, your storied pomp!” cries she
With silent lips. “Give me your tired, your poor,
Your huddled masses yearning to breathe free,
The wretched refuse of your teeming shore.
Send these, the homeless, tempest-tost to me,
I lift my lamp beside the golden door!”