While some applaud the decision, others fear indoctrination to the youth

Mexico (Agencies). – Leftist Mexican president López Obrador announced that “Islas Marías Penitentiary Complex” will cease to be a prison and will become a space to promote tourism, camps for children and young people in which “transformative workshops” will take place.

“We have decided that Isla María, will stop being a prison. The mother island has been a prison dating from the time of Porfirio Diaz, in 1905, and it is an icon  of punishment, torture, repression throughout more than a century” Lopez Obrador said.

The Islas Marías Federal Penal House, located on the Marías Islands off the coast of Nayarit, is a penitentiary establishment of the Federal Government of Mexico, was created as such on May 12, 1905, by decree issued by Porfirio Diaz, president of Mexico. The Mother Island was destined to serve as a prison colony. 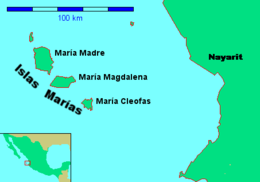 At one time the worst criminals were sent there, later enemies of the state or people against the government or who had fought against the state. On December 30, 1939 by decree of Lázaro Cárdenas prisoners, become settlers, and could live with their families and a new type of inmates were selected to purge sentence in the penal, for the safety of families (not being able to apply sex offenders or psychopaths). Its prison population has fluctuated from 300 to 3000 prisoners for various crimes.

The president also informed that 200 inmates could be released and that there is the possibility of reducing sentences for the rest. Lopez explained that this measure applied to this 113 year-old prison has the intention of ending a model of punishment that violates human rights, as Islas Marias “are infamously known for.”

According to AMLO, there will be savings of around 700 million pesos from the costs of maintaining this location. Josefa González Blanco, Secretary of Environment and Natural Resources, announced that in Islas Marias there will be camps held for children and young people in which “transformative workshops” will take place (a word that translates to “indoctrination” to many against AMLOS´s leftist government).

As for prison workers, they will be relocated to prisons closer to their homes.

The government claims that the existing infrastructure will be adapted to become a center of environmental education and training for the youth so they can interact with nature. Others in Mexico fear this could become the beginning of indoctrination camps for the youth.