Mexican Nopal: superfood auxiliary in the control of diabetes and hyperglycemia: IMSS

She explained that the hypoglycaemic effect of nopal has been scientifically proven; that is to say, it is an effective tool in the prevention of diabetes, since it manages to stabilize and regulate the levels of blood sugar.

In addition, when it comes to people with high cholesterol, the consumption of Nopal helps to eliminate it, preventing the body from absorbing much cholesterol and it combats the accumulation in veins and arteries.

“The amino acids, fiber and niacin contained in the Nopal prevent the excess of sugar in the blood from turning into fat, and on the other hand, it works by metabolizing fatty acids, thus reducing cholesterol”, she continued.

IMSS Nutritionist Romero Valdovinos added that vegetable fibers and mucilages of this cactus also control the excess of gastric acids and protect the gastrointestinal mucosa, preventing gastric ulcers and that kind of affections.

She explained that Nopal contains vitamins A, B complex, C, minerals such as calcium, magnesium, sodium, potassium, iron and fibers in lignin, cellulose, hemicellulose, pectin, and mucilage which, in conjunction with the 17 amino acids, help to eliminate toxins caused by alcohol and nicotine. 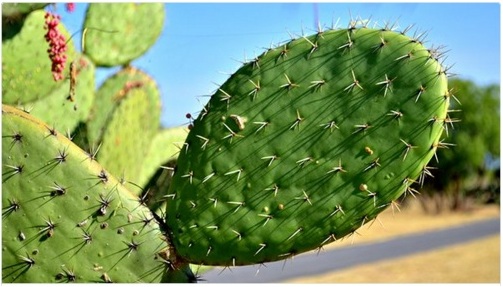 Finally, the nutritionist highlighted the most important advantage of the Nopal, which is its versatility, as it can be prepared in salads, soups, stews, roasts, tacos, as well as in sweets and jellies or as snacks, tortillas, salsas, beverages, desserts and it is delicious.

TYT Newsroom with information from larevista.com.mx