50 years after the Tlatelolco massacre, Mexico is still not sure what happened…

Mexico marks the 50th anniversary of Tlatelolco massacre, which remains an open wound in Mexican society, and activists say the impunity remains as nobody has been convicted for the killings.

Security forces fired at thousands of students, who took to the streets days before the inauguration of Mexico’s first Olympic Games on October 2, 1968, to demand an end to police repression and the release of political prisoners.

Nobody knows exactly how many died when soldiers opened fire, estimates range from the official version of 25 dead to a more recent investigation that identified 44, but activists believe the death toll was around 300.

“This was a traumatic day for everyone, it was a day of anger, it was a day in which we felt deeply betrayed by the government,” Felix Hernandez, a former leader of the student movement told the local news agency, El Universal. 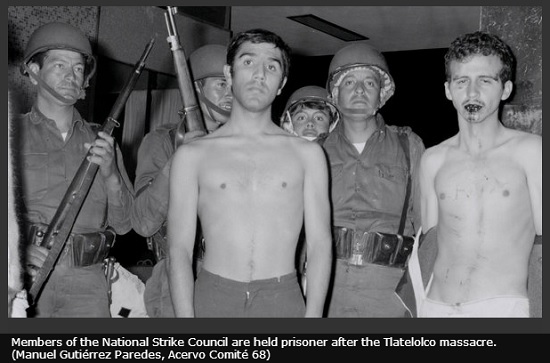 It was a time of change, students observed Paris roiling, the American Civil rights movement was strong, people were speaking out and in Mexico, the students felt it was time for a change.

But demonstrators were met by the army and special forces and they were brutally repressed.

The intense fire lasted half an hour and the result was “hundreds of deaths, thousands of wounded, and hundreds of political prisoners,” Hernandez said.

Fifty years later, many in Mexico see Tlatelolco as the beginning of a series of violations by the state, that to this day remain unsolved in tribunals.

It was not until last week, half a century later, that a Mexican government institution admitted for the first time that a state crime was committed.

“The Tlatelolco massacre … represents a historical chapter in which the Mexican state showed its most authoritarian face by silencing the voices of the citizen’s movement,” Jaime Rochin, chief of the Executive Commission for Victims’ Assistance in Mexico (CEAV) said in a statement early this month.

Rochin said that the government used “snipers who fired to create chaos, terror and an official narrative to criminalise the protest”.

However, despite this declaration, many believe that justice remains elusive and the general feeling is one of sadness and disappointment in the government’s repeated mistreatment of activists.

Recently, the most famous case of violence against activists is that of the 43 missing students from Ayotzinapa.

In September 2014, 43 student activists from Ayotzinapa Teachers’ College disappeared in the state of Guerrero as they were heading to Mexico City for the anniversary of the Tlatelolco massacre.

Authorities said that corrupt police officers had seized the students and handed them over to a local drug trafficking gang, which killed them and burned their bodies in a nearby garbage dump.

But investigators disputed that account and said the state probe was flawed. They accused the state of ignoring calls to investigate the army’s possible involvement.

Until today the government is still fighting a court order that it allows a truth commission to investigate the fate of the 43 students who disappeared in 2014.

“In 1968 the repression was carried out by the army and riot police; today, it is done through paramilitary groups … it is a very important difference,” said Victor Guerra, another former leader of the ’68 movement to the Associated Press.

But some things have changed.

In 1968 students struggled to distribute leaflets and fought the indifference or lies of government-aligned media.

The day after the 1968 massacre, newspapers depicted it as an attack on soldiers, with headlines like “Terrorists and soldiers fought a tough battle” and “Criminal provocation causes bloody confrontation”.

In the digital age, students have the power to communicate with the world at their fingertips.

“Young people today, we can say what really happened, we have ways to prove it. Back then they didn’t have cell phones, you had no way to prove what happened. You didn’t have a camera in your hand.”

TYT Newsroom with information from AP