Mexican Gastronomic Delights to Commemorate the Day of the Dead

MERIDA Yucatán (Times Media Mexico) – One way to keep alive the memory of those who are no longer here is to remember them with love. The Mexican people know this well. For this reason, they preserve the tradition of inviting them to return with light, aromas, and flavors this, of course, at the altar of offering to the dead.

This homage is so crucial that it has been inherited throughout the centuries, being one of Mexico’s most beautiful traditions, so much so that it is internationally recognized and even considered World Heritage.

The representation of the offerings consists of elements with significant meaning and varies according to the country’s region; however, there are some very common in Mexican families in gastronomy.

The value of this celebration for Mexicans is the sense of family and the celebration of life. That is why our dead are pampered with the dishes they loved most in life. These are some examples.

Pan de Muerto -Bread of the Dead-. – It is the characteristic bread of this deeply rooted tradition, and you will agree with me that it is so delicious that, in advance, you will find it in bakeries, and you can choose among those bathed in sugar or sesame depending on the state. 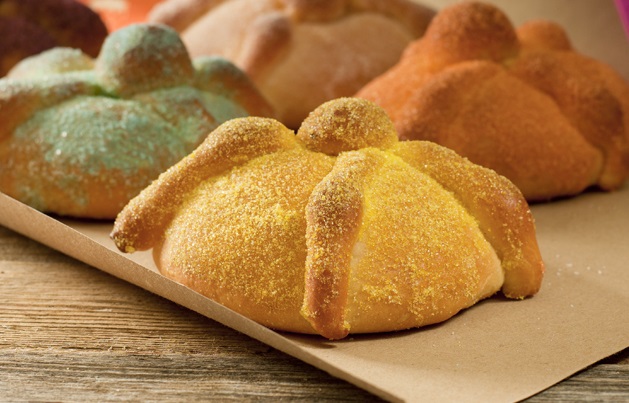 You will also find recipes to bake it yourself. It will give an extraordinary touch to your altar from which you will see that it is not just any bread. Its secret ingredients are orange peel rind, aniseed tea, and orange blossom tea (depending on the region).

The origin of this bread has many variations. Its crossed lines represent the four cardinal points or the four Aztec deities. Others mention that they allude to the tears and others to the dead’s bones being the center of the heart or the skull.

Pan de Muerto has many regional varieties, so if you travel to a different place on these dates, do not hesitate to try it.

Dulce de Alfeñique or Calaveritas: The calaveritas or alfeñique has been prepared since colonial times in much of Latin America, but in Mexico, the houses are filled with this colorful candy on the Day of the Dead. 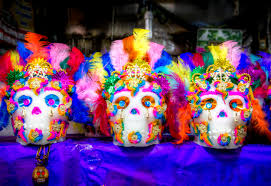 Its elaboration is something more than merely artistic and traditional; It requires powdered sugar, hot water, lemon, and grenetine to form a paste, Mexican hands need molds to create figurines such as the little skulls mentioned above, coffins with their dead inside, animals, angels and fruits that then apply the creativity to paint and decorate them. In different states, they add other ingredients such as chocolate, almonds, honey, and pasta.

On the eve of the Day of the Dead, they begin to make these candies. The markets are supplied with colorful figures made of alfeñique, which are so unique that they have their annual Fair and Festival held in Toluca, where you will find some astonishing figures.

These, as well as the typical candies of your place of origin, that do not lack in your altars mainly in the children’s offerings so that they are filled with joy and color, besides being an excellent form to support the families that year after year sweeten the tradition.

Atole. – It is a drink that comes from the corn. In Mexico, we consume it in tamales or tortillas, but once cooked with water, we find an unsurpassable pre-Hispanic drink called atole. 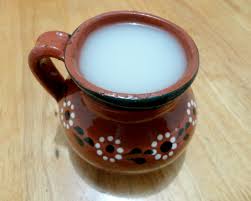 It is prepared in different ways in each region of the country. We commonly know that when the viscous consistency of atole is achieved, it is served as hot as possible and is sweetened with piloncillo, cinnamon, honey, or just sugar. It is one of the traditional drinks of the Day of the Dead, besides being very loved by Mexicans.

Nowadays, atolls are prepared with cornflour to enjoy flavors such as strawberry, chocolate, vanilla, or guava. These can be ideal for the children’s altar.

Mole – The mole is the sauce cooked with chicken, turkey, or beef and is like the delicacy’s main dish. In this list, it represents the typical stew that our deceased loved the most, and by far, the mole is the most exposed in the offerings, although it varies from home to home, perhaps they prefer to serve pozole, red pipian, or some typical broth of the place. 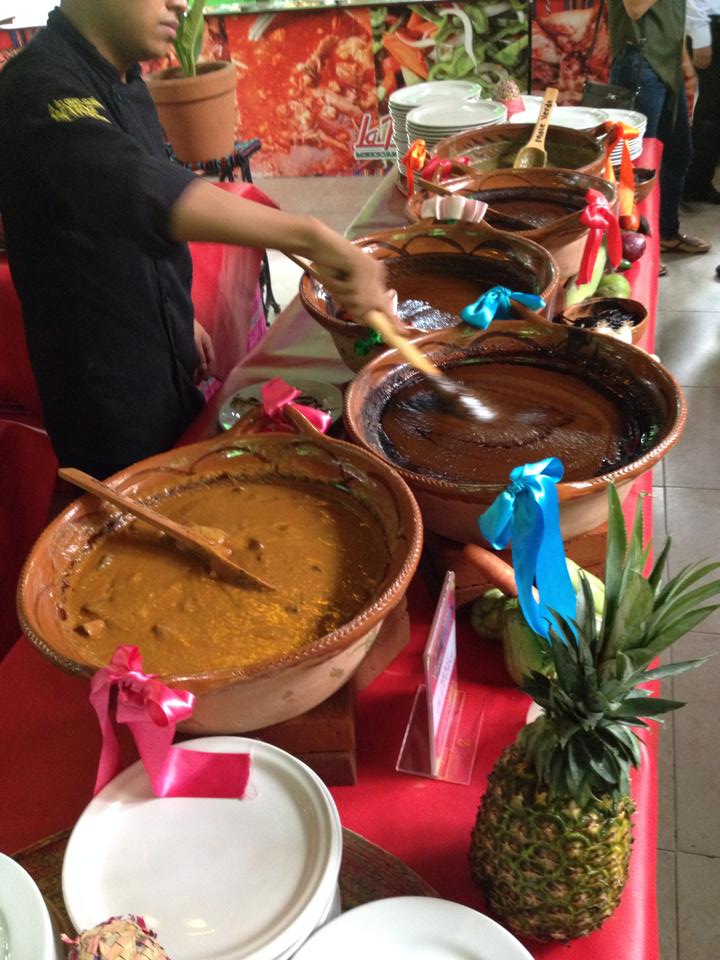 The sauce is prepared with cocoa, different types of chilies (mulato, pasilla, ancho, chipotle), almonds, raisins, parsley, and many other spices and that when cooked, is accompanied with ajojolí as the final touch.

Green mole, black mole, mole de olla, mole poblano enchiladas What a delight! Mole is a delight. In Oaxaca, there is a variety of yellow molecules for the Day of the Dead made with blond and yellow chilies, tomatoes, green beans, chayotes, potatoes, and other spices.

Chocolate: Something few know is that it was in Mexico that chocolate, which comes from cacao, was discovered. The ancient inhabitants believed it had a revitalizing, nutritious power, and for accompanying us in many ways, it undoubtedly deserves our affection. Besides, it manages to give us this hot drink that best combines with the bread of the dead.

Elaborated with chocolate bars, sugar, and milk is how this traditional drink is prepared; in some places, they add essences like vanilla, herbs, mint, and liquor to which they can also add marshmallow.

Another drink of pre-Hispanic origin is the champurrado, equally delicious. Still, it is of a thicker consistency since chocolate is made with cornflour, piloncillo, sugar, and chocolate tablets.

Mucbipollo – Mucbipollo is similar to Pan de Muerto because it is a delicacy that we only eat at this time of year, which is why it is so desired in the Mexican Southeast. In the Yucatan Peninsula, during the “Hanal Pixán,” which means “food of souls.” 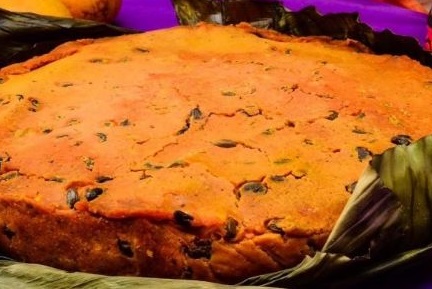 Mucbi pollo means “that has been buried” in the Mayan language, referring to the fact that it is cooked underground as the ancestors did. In Mayan communities, this custom of cooking food underground is still alive and well.

The “pib” as it was later called is similar to a large tamale from which the “cabbage” mixture is first prepared, which is made with water, chicken and pork, ground pepper, epazote, roasted garlic, chopped tomato, salt, and butter; what makes it have consistency is the dough that is added to it. What follows is to create the dough that covers this mixture, and it is not just any dough. You add red (achiote), butter, salt, and espelon (tender bean).

Having the dough, put the banana leaf palms in a mold and add the dough to obtain the pib’s thickness, add the cabbage, cover it with a base of dough, more leaves, and start cooking.

In the Mayan tradition, it must be prepared one night before the Day of the Dead, and the first that is cooked is the one put on the altar of the dead while the families also eat and share it.

Fruits of the Season: Besides the exquisite typical food, it is a tradition to put on the altar the fruits of the season according to the region. The same can be oranges, jicamas, or tejocotes, putting color and freshness.

These fruits, like the dishes, were the ones that our deceased loved the most. For the children, they are served in colorful small plates with chili, lemon, and sugar.

Arroz con Leche: At the altar table, you can’t miss the traditional desserts that the great majority of people like. One of those desserts is the rice pudding, warm and with a lot of cinnamon, especially in places where it is cold. 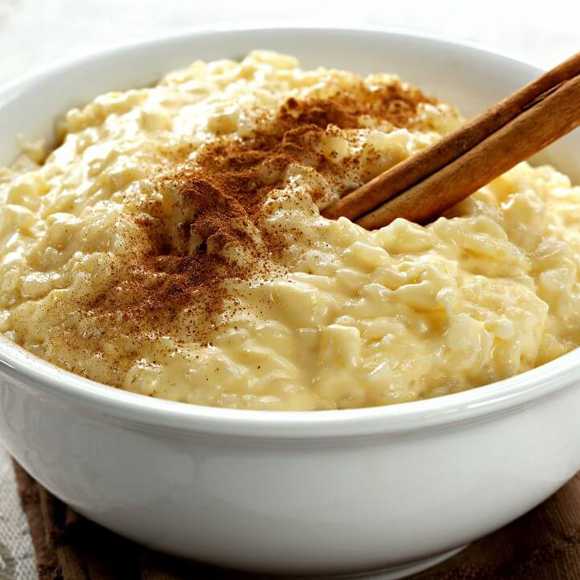 This dessert is typical in many countries and consists of slowly boiling rice with enough milk, sugar, and cinnamon sticks. It can be served either hot or cold and decorate the dishes or small glasses with two or three raisins.

For us, Mexicans, an essential part of this celebration is to get together with our family, build a beautiful altar, and celebrate the lives of the people who came before us on the road.

The main ingredient of each element of the altar is love, and we seek to keep our traditions alive and pass on to our children the passion, respect, and family life, while we wait each year for the return of our dead.