CUIDAD DE MEXICO – When Andrés Manuel López Obrador arrived at the Presidency of Mexico, he found a Boeing 787-8 aircraft for the exclusive use of the President of the Republic. The original price of the aircraft was 218 million dollars.

Today, according to the United Nations, that presidential plane costs $150 million, that is, the “presidential” plane has had a depreciation of nearly 40 percent. But even more. The presidential plane is a personalized plane, destined and arranged exclusively for the use of the Mexican head of state, with ad hoc spaces for his functions. That is why it is an obstacle for a commercial airline to be interested in acquiring a plane with those characteristics. It would have to spend around 20 million dollars to adapt it to the daily use of passenger transport. That expenditure, plus depreciation over almost 10 years, would make the investment unrecoverable.

In a display of demagogic hysteria, Lopez Obrador put the aircraft up for sale since he was a candidate, and as president-elect of Mexico, he has always said that this plane is an excess, “to use a device of that nature in the face of so much poverty among Mexicans”. Lopez sees himself as an apostle of equality, who proclaims daily to end poverty and moderate opulence… yet the country is drowning in its own violence.

But beyond a simple luxury, the presidential plane is a matter of national security. Traveling on commercial flights causes delays of hours, and puts other passengers at great risk in a country where a powerful narco-state has settled. If someone were to think of an attack on the president, it would be the same as with Avianca flight 203, a Boeing 727-21 plane that was the victim of a terrorist attack and exploded in midair on November 27, 1989 shortly after taking off from Bogota’s “El Dorado airport” towards Cali.

Although Pablo Emilio Escobar Gaviria never accepted responsibility for this event, the explosion occurred as a result of a bomb introduced by the Medellín Cartel that was aimed at César Gaviria, then a presidential candidate, who had not taken the flight after being alerted by his security advisors. The attack had a tragic outcome of 107 people killed

The López government, which always assumed itself to be “of the left”, today is closer to the “neoliberal” model that it seems to abhor so much, except that in 14 months it has become clear that AMLO’s government lacks ideas and a defined ideology, hence the ridiculous occurrences. 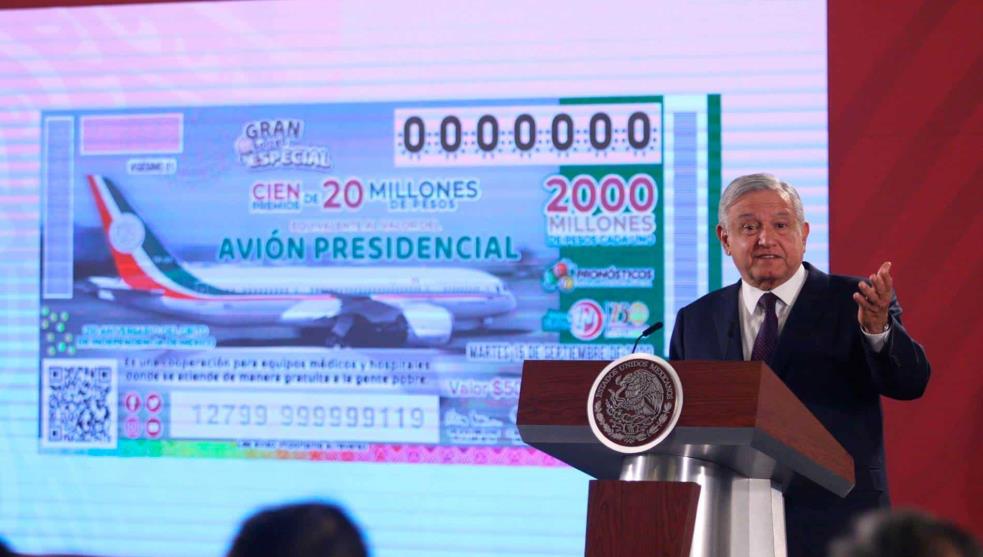 López Obrador’s latest genius idea has been the raffle of the Boing 787-8 in which not one person will win the plane, but money, which will not be won by one person, but by several, who will also not have access to the plane. According to Lopez, six million lottery tickets will be issued to collect 3 billion pesos and pay the 2,724 million still owed.

The Executive Branch is asking for support to acquire from 40,000 to 400,000 tickets; yet, “there is no pressure to buy presidential airplane raffle tickets”.

AMLO passes the hat
With chipilín tamales and chocolate atole, Andrés Manuel López Obrador committed some 200 of the country’s most important businessmen and women to support him in his raffle proposal related to the presidential plane.

At a private dinner at the National Palace, the Presidency handed out a document in which the businessmen and women participated in a “pass the hat” sort of an event, for the “voluntary” purchase of 4 million tickets for the draw to be organized by the National Lottery, whose resources will be used to buy medical equipment for public hospitals. A new ingenious way to tax, collect money or for some, “a good ol’ shakedown” no different than the one from the Mexican cartels.

They were given a letter of commitment to “voluntarily” acquire and pay the tickets, and whose amounts range from $20 to $200 million pesos, in other words, to acquire from 40,000 to 400,000 pieces. At the time, the general director of Banobras, Jorge Mendoza, made it very clear, the contributions would not be tax deductible.

The letter details the amount to which the businessmen would commit themselves, which they would have to sign and put their name, address, telephone and e-mail. It became known that some businessmen deposited it in a raffle similar to the one used by the National Lottery in its drawings. 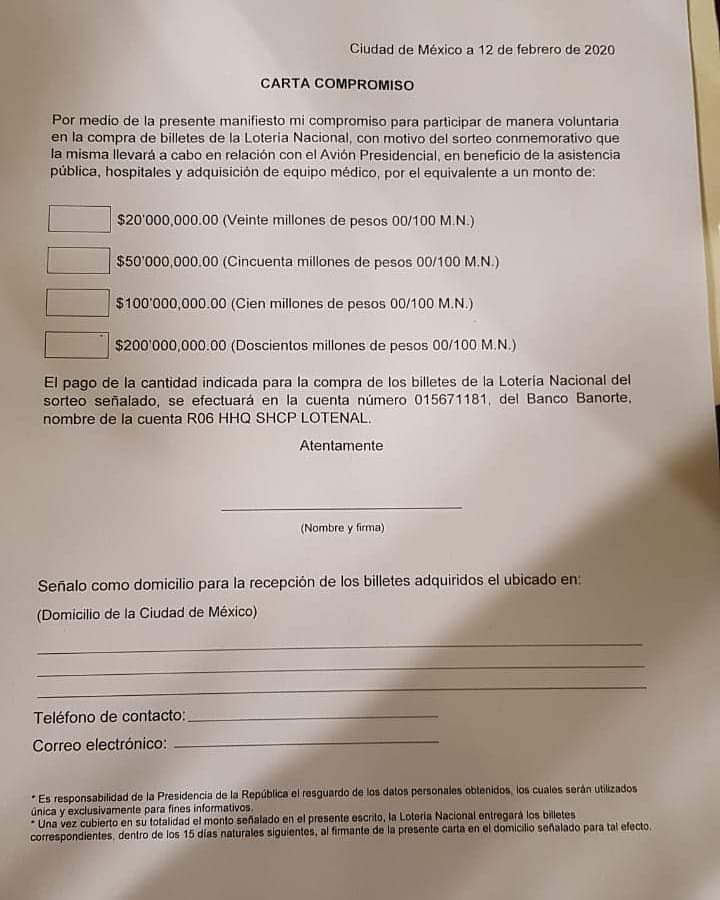 “I hereby declare my commitment to voluntarily participate in the purchase of lottery tickets on the occasion of the commemorative drawing that it will carry out in connection with the presidential plane for the benefit of public assistance, hospitals and the acquisition of medical equipment for the equivalent of 20 million, 50 million, 100 million and 200 million” the document reads.

Miguel Rincón Arredondo, president of Bio Papel, said that during the dinner there was a “great” response from the businessmen. He confirmed that the document provided to them had four options for cooperation and each one signed and deposited it.

Bosco de la Vega, president of the National Agricultural Council, also confirmed the format with options and even revealed that he did not have it with him, since he had left it in the raffle.

–Were those the most expensive tamales you’ve ever eaten.” A reporter asked.
-“So far, yes”. He answered

The president of the CONCAMIN, Francisco Cervantes, said that in his message López Obrador expressed that he never liked the excess of the presidential plane: “He said that the government cannot use this type of thing [plane] and he sent a message so that no ruler falls into these excesses again”.

At the central table of the Treasury Hall, the President was accompanied by businessmen Carlos Slim and María Asunción Aramburuzabala, who sat next to him. The event was inaugurated by screaming children from the National Lottery. 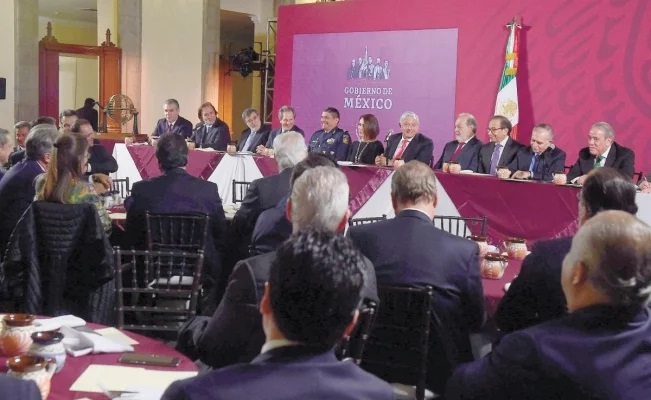 Upon his departure, businessman Carlos Bremen, who bought the seized house from Chinese-Mexican businessman Zhenli Ye Gon a few months ago, commented: “We are going have to be in the street corners selling raffle tickets”.

Businessman Slim Helu always very diplomatic, said the money is to buy medical equipment and “of course [we will support] it because it is a good thing”.

Antonio Suárez of Grupomar said they will support from their trenches. The businessman said that while he will not buy the 40,000 tickets proposed by President López Obrador, he will buy a few thousand and give them away to his employees.

AMLO’s request during dinner, is no different than “the offer you can’t refuse” by the very Don Corleone. Of course, you can always say no, and then… well, instead of waking up with a horse’s head at your feet, you’ll wake up with something even worse… The Mexican IRS looking at your every move.