Commentary: No country is exempt from economic challenge

Since 1968 when I first spent time in Mexico, I have always thought that our two countries’ futures were inevitably linked.

After a recent visit, I believe this is even truer today. The global economic forces have generated similar experiences. As a result, both countries face issues that are much the same. We are more alike than different.

The case of a shuttered weaving mill in San Miguel de Allende illustrates this. San Miguel is a beautiful precolonial city of about 60,000 people in central Mexico. It’s now a magnet for U.S. and Canadian retirees who want to enjoy a cosmopolitan, affordable retirement.

But this idyllic city has had problems. In 1992, the city’s largest employer, Negociacion Fabril de la Aurora, closed its doors. At the time, Aurora, which first opened in 1902, had employed some 300 people working three shifts. Throughout much of its history, several generations of the Garay family, who purchased Aurora in 1932 during the depths of the worldwide depression, worked diligently to make the throwing mill a financial success.

This unionized factory became more than a place of work. Aurora sponsored sports teams, held musical concerts and participated actively in a variety of holidays and celebrations of which San Miguel has many. The annual “Alborada” holiday, which celebrates the patron Saint San Miguel, was instituted by Aurora’s employees.

The production of Aurora’s exquisite linen cloth was the result of its skilled workers and the entrepreneurial Garay family. But the cycle of business growth and decline, created by globalization, with which the U.S. is all too familiar, caught up with Aurora. With uncertainty surrounding the pending approval of the North American Free Trade Agreement (NAFTA), and the inability to compete with much less expensive labor costs in Southeast Asia, Aurora closed in 1992. 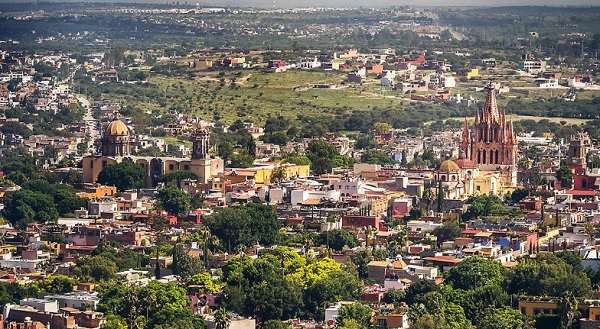 But this story which mirrors so vividly hundreds of similar plant closures in the U.S. doesn’t end there. The Garay family teamed with local artisans and transformed the 90-year-old factory into a successful art and design center that opened in 2001. With its façade of 12 stone carved arches and impressive wrought iron work, Aurora now houses 72 stores, studios, galleries and design establishments. There is a waiting list of new businesses wishing to move into Aurora.

Collectively, the various firms and shops that now occupy Aurora employ almost as many as who worked there when it was a throwing mill. There were other economic gains. Former mill employees gained mechanical, carpentry and other trade skills that allowed them to quickly obtain jobs in tourism and construction industries of San Miguel.

It would have been easy to give up, blame cheap labor in other countries and walk away from Aurora. But the fortitude of the Garay family, buttressed by a few entrepreneurial artisans, turned what could have been another shuttered factory story into an aesthetic and economic success.

Yes, Mexico and the U.S. share more than a border. In many respects, we share similar histories of business successes and failures. Fortunately, we also share an entrepreneurial spirit that pervades our respective populations. Simply look at the complex supply systems of parts, labor, design and management that creates today’s automobiles and other sophisticated products. They are jointly manufactured in Mexico and the U.S. with parts from throughout the world. People on both sides of the border win.

Mexico and the U.S. have more in common than we often realize. It isn’t popular now to suggest that countries with similar histories should work more closely together to solve issues that are larger than any of them. However, it’s these commonalities of economic experiences, both good and bad, that provide the basis for collective problem-solving. This can lead to better quality of life in our respective countries.

MacDowell, of Estero, is president emeritus of Misericordia University and managing director of the Calvin K. Kazanjian Economics Foundation.