Yucatecan businessman ambushed in Chiapas, his driver was murdered

MÉRIDA, Yucatán.- Once again, a Yucatecan businessman was the victim of insecurity outside the state. This time in in the state of Chiapas, where he was ambushed in the middle of the road by a group of criminals that left him “seriously” injured, while his driver died on the spot.

On September 1, 2017, Yucatecan businessman Jerry B.C was found dead in Villahermosa, Tabasco. For this murder, the authorities of that state detained three people, who currently are under criminal proceedings, including an employee of the victim.

In this new case, it was Ticul’s businessman Rodrigo Azarcoya Moo, who is the owner of the “Yomira” shoe factory, and who went to Chiapas on a business trip, accompanied by his driver José Manuel Canché Cámara, also from Ticul.

On Saturday April 21, both men were on their way back to Merida and were suddenly ambushed by a group of criminals armed with long weapons, who had blocked the road, in the middle of the mountains.

The group feigned the two Yucatecans and stripped them of $30,000 pesos in cash, cell phones and other belongings. Inexplicably, the criminals became extremely aggressive, and shot both men at point blank.

The driver José Manuel Canché Cámara died on the spot as a result of the shooting, while his boss Rodrigo Azarcoya was seriously injured. 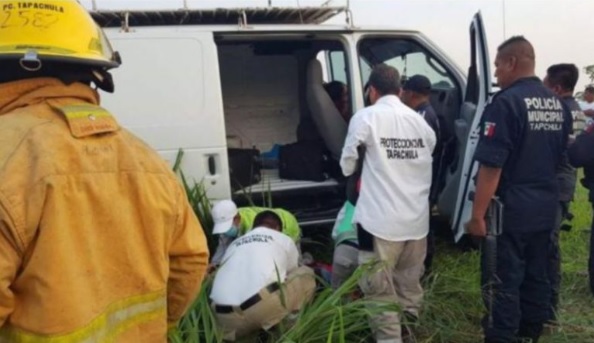 Azarcoya remains hospitalized in Chiapas in serious conditions, and in the next few days he will be transferred on air ambulance to the city of Mérida for recovery.

The truck in which the victims were traveling received a total of 15 bullet impacts from high-powered weapons.

The assailants fled the scene in a Honda CRV, blue color, which according to Chiapas authorities, was being tracked by security cameras. The fact is, absolutely no arrests have been made so far in relation to this terrible crime.