“We don’t want illegals from Mexico or outer space”
mysterious Monolith that appeared in California torn down by a group racist christians.

CALIFORNIA United States. (Agencies) – According to a recording broadcast on social networks, a group of men knocked down the mysterious Monolith that appeared on Wednesday in Southern California and replaced it with a cross.

“We don’t want illegals from Mexico or outer space,” one of the suspects said, according to a recording circulating on social networks.

The men pushed the metal monolith repeatedly while shouting “Christ is king” until they threw the structure. The men then removed the Monolith and replaced it with a wooden cross. The recording does not show whether the men took the structure away.

Atascadero city officials received reports that hikers were attacking the steel structure located at the top of Pine Mountain in Stadium Park, according to the local media, The Atascadero News. 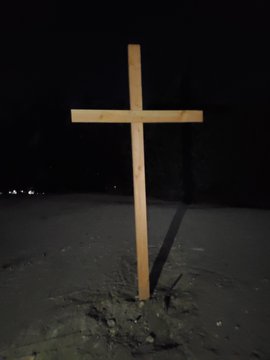 By Thursday morning, the Monolith was gone.

“We are upset that these young people felt the need to drive five hours into our community to destroy the Monolith. The Monolith was a unique and fun thing to do at a stressful time,” Mayor Heather Moreno told the media.

The Atascadero Police Department is reviewing the video and investigating this incident and noted that so far no one has filed a report for the disappearance of the Monolith.

The steel structure is about 10 feet high and weighs approximately 200 pounds. Pine Mountain is 1,300 feet high, and there is no vehicle access to transport something as large as the Monolith.

So far, authorities have no information about how the structure got to the top of the mountain or who placed it there.

The men on the tape have not been identified so far.