Just hours after his historic election victory sent thousands of supporters pouring on to the streets, 64-year-old leftist Andres Manuel Lopez Obrador, tweeted that he had received a call from US President Donald Trump.

“I proposed that we explore an integral agreement of development projects, which generate jobs in Mexico and with that reduce migration and improve security. There was respectful treatment and our representatives will speak more.”

In an interview with the Televisa news network, López Obrador emphasized the need for mutual respect and cooperation between the two neighbors.

“We are not going to fight. We are always going to seek for there to be an agreement … We are going to extend our frank hand to seek a relation of friendship, I repeat, of cooperation with the United States.” 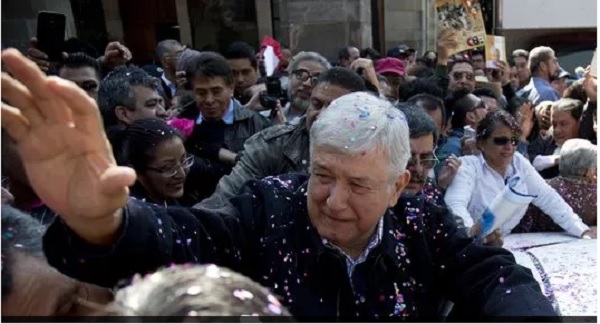 “AMLO” had vowed during the campaign to “put Trump in his place,” at a time when the Republican president’s anti-trade, anti-immigration policies have infuriated Mexican people.

But the two men appear to have hit it off in their first phone call after Lopez Obrador’s victory.

“I received a phone call from Donald Trump and we spoke for half an hour,” Lopez Obrador wrote on Twitter, in one of his first messages as president-elect.

Trump mentioned the phone call as he addressed reporters in the Oval Office. “I think the relationship is going to be a very good one. We had a great talk,” he said.

“I think he is going to try and help us with the border issues.”

US-Mexican relations have been strained since Trump won election in 2016 after a campaign laced with anti-Mexican insults, attacks on the North American Free Trade Agreement (NAFTA), and promises to build a wall on the two countries’ border and make Mexico pay for it.

That rhetoric fired up his supporters, but caused alarm in Mexico, which sends 80 percent of its exports to the United States and is deeply intertwined with its neighbor thanks to the 11.4 million Mexicans who live there.

“Millions of Mexicans are fed up with this regime of corruption and privilege, and decided to vote for a real change,” “I’m going to tke care of that,” AMLO concluded.