Río Secreto is an Urban Hydro-geological Reservation concept that offers visitors a trip through the bowels of Playa del Carmen. Competition and urban growth are the main challenges of this company dedicated to ecotourism.

Forbes México reports Mexico received 35 million international tourists in 2016, which generated revenues of $19.571 million dollars, according to data from the Secretary of Tourism (Sectur). Many of these visitors are Americans who prefer places like Cancun, Tulum, Riviera Maya or Playa del Carmen.

“These last two years have been extraordinary. Mexico continues to be an attractive destination; the Riviera Maya and Cancun are increasingly recognized and although we have suffered blows from the bad reputation that the country, like delinquency and environmental issues, people continue to come,” said Otto Von Bertrab, director general of Rio Secreto.

Río Secreto, a territory of 240 hectares and a system of underground caverns 30 kilometers long, opened its doors to the public in April 2008 with an investment of $1 million dollars and the slogan of creating an entertainment environment with a sustainable model.

“After exploring underground caves with geologists, archaeologists and hydrologists for a full year, the first requirement for opening this place was to preserve it as it is, and for that purpose we designed low-volume ecotourism tours, building the minimum infrastructure,” said Von Bertrab.

“We have been growing as a destination for a couple of years. We are a company that could be reaching 20% growth for 2018, “said Von Bertrab.

Río Secreto has 15 different accesses, which ones allows to make more complex tours and avoid the agglomeration inside the caves. Almost 10 years ago the influx of Rio Secreto was 100 people a day, today there are days that we receive up to 800 people.

“Río Secreto is only seven kilometers from Playa del Carmen. We are in an ideal point to receive tourists, “said Von Bertrab.

As well as Tulum and the Riviera Maya that are tourist destinations that were practically not planned, the same thing happens in Playa del Carmen with the growth of the urban spot. 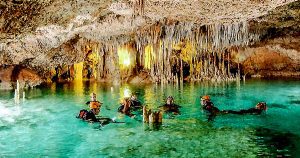 According to Otto von Bertrab, urban growth in Playa del Carmen has been maintained in recent years at a rate of 12% per year.

Pollution goes hand in hand with the unplanned and badly planned growth of the urban spot in Playa del Carmen.

“There is no planning, there are no roads, there are no parking lots and worse there are no drains. The infrastructure just got in just five years ago, but they do not have drainage and there is a very big risk of water contamination, “said Von Bertrab.

An example shared by the manager is that, if an oil spill occurs anywhere in the Yucatan Peninsula, that oil is filtered into the underground rivers known as Cenotes.

“The main cause of contamination of Mexican beaches is the drainage that pours their pollution directly into the sea. The treatment plants in the country are insufficient and several of them work poorly: of the 1,481 existing, 178 are inactive, “according to Greenpeace.

Against this panorama of an excessive growth of the urban spot Otto Von Bertrab has made different efforts to protect Rio Secreto.

“We have dedicated much of our commitment to turn this area in a protected natural area. At the urban reserve level, we achieved that the urban development plan was considered an urban reserve. Right now it’s a private reserve where we’ve bought land, “said Von Bertrab.

Competition is another factor that must be faced by the Rio Escondido team. “There is a lot of competition, there are up to 200 ecological tours, in addition to the big parks like Xcaret. Corruption has caused unfair competition to increase, “commented the director general of Rio Secreto.

Apart from the natural wonder that is Río Secreto, there are protected species such as jaguars, pumas or ocelots.

“There are virgin wildlife in the region, in danger of extinction and protected. The commitment of Rio Secreto is for both sides, on the one hand, to be a tourist attraction that generates jobs and pride in the community. On the other hand, we have a very strong commitment to conserve the ecosystem, “said Von Bertrab.

Mexico is the fourth country with the greatest biodiversity of the planet, since 6.5% of the world’s biodiversity inhabits 108,519 species in our country, according to the World Wildlife Fund (WWF).

The 30 kilometers of the underground caves of Río Secreto are only four kilometers long. “The rest is so beautiful, we have left it for conservation,” said Otto von Bertrab.

Another alliance is with the Center for Scientific Research of Yucatan (CICY), which also studies water pollution.