Vibra Mexico: a march for respect Sunday Feb. 12 in Mérida

A total of 77 NGOs and universities are organizing ‘Vibra Mexico,’ nationwide demonstrations in several Mexican cities, against what they call “Donald Trump’s disrespect for Mexico”, and to demand a stronger and more energetic response from the Mexican government.

As part of this movement, a march will take place in Merida at noon on Sunday Feb. 12 from the Remate of the Paseo de Montejo to the Plaza Grande. 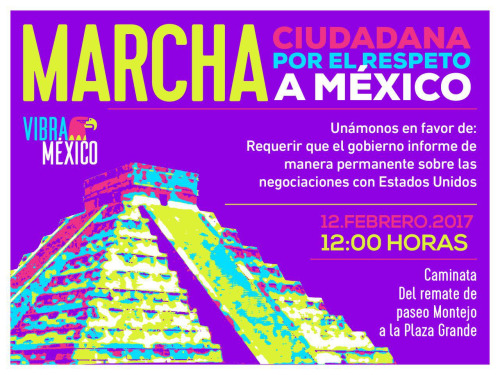 During a press conference, some of the organizers emphasized that this march aims to express rejection and indignation against the words and actions of U.S. President Donald Trump towards Mexico.

“What we are doing is for Mexico” said Enrique Graue, UNAM rector, during the national presentation of this act.