The governor of Yucatan, Mauricio Vila Dosal, has been designated as the most honest and trustworthy in a survey conducted by CAUDAE Estrategias.

The survey’s question number one was: “Assuming you lost your purse or wallet in a public place and the governor finds it, do you think he would return it? (Yes or No).

Mauricio Vila topped the list on this particular question, with a percentage of 72.4, followed by Claudia Sheinbaum mayor of Mexico City (CDMX) with 71.6%; Francisco Domínguez, governor of Querétaro, is in third place with 69.7%; Adán A. López, governor of Tabasco, is in fourth place with 69.4% and in fifth place is José Rosas Aispuro, governor of Durango, with 69.1% . 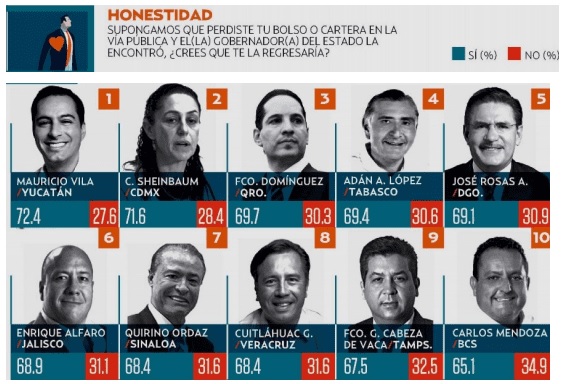 In another question, citizens were asked about the integrity and trustworthiness of their governor, Claudia Sheinbaum of Mexico City (CDMX) came up first with 70.2%, followed by Mauricio Vila, governor of Yucatán, with 68.3%.

The specific question was: “If an emergency arises and you need to leave your children or loved ones with your state’s governor, will you trust him?” 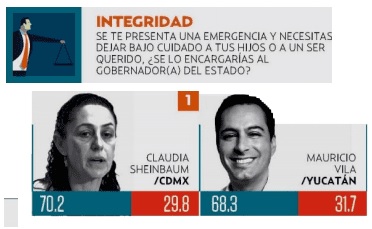 In relation with knowledge, the survey stated: “if you are given a test and you need an advisor to help you solve the problems on it, would you ask your state’s governor to help you?” In this part of the survey, the governor of Tabasco, Adán Augusto López, was the winner with 59.1%; followed by the governor of Querétaro, Francisco Domínguez, with 58.9%. And Yucatán’s Mauricio Vila came up sixth with 41.8%. 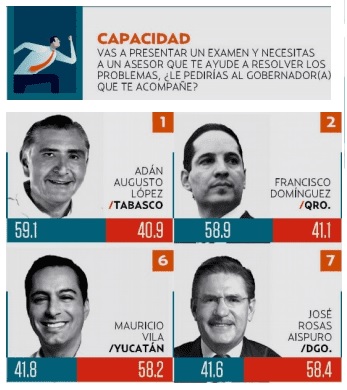