Mexican born journalist Jorge Ramos and five members of his Univision crew were detained in Venezuela while there to interview embattled President Nicolás Maduro.

Univision said Monday that Ramos and his team were being “arbitrarily” held at the Miraflores Palace in Caracas but that Maduro didn’t “like their questions” during a scheduled interview. The network said its equipment was also confiscated.

Univision President Daniel Coronell said the team was released later Monday after speaking with Maduro’s communications minister but said he had not yet spoken with Ramos. 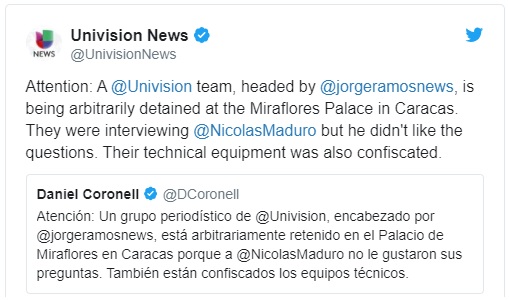 Maduro’s legitimacy as president has been called into question since he was re-elected last May amid claims of vote-rigging. The United States backed an alternate leader, 35-year-old Juan Guaidó, last month, and Maduro responded by severing diplomatic ties.

Ramos called in to Univision shortly after he returned to his hotel Monday evening. He said Maduro detained the crew for more than two hours after Ramos asked him about “the lack of democracy, about the torture of political prisoners, about the humanitarian crisis.” Ramos also said Maduro didn’t like it when he referred to him as a dictator.

“He got up after we showed him a photo of young people eating out of a garbage truck, then one of his ministers said the interview wasn’t authorized, they took all our equipment, took our cards, took our cellphones,” Ramos said via telephone. “They were interrogating us, they put us in a security room, turned off the lights… kept a lot of our personal things.”

The Mexican journalist said Maduro’s team had taken the footage Ramos and his crew had managed to shoot.

“It was a total violation of the freedom of expression, of human rights, of the principles of all journalists,” Ramos said. “They think the interview is theirs, not ours. And they’re robbing us of our job.”

The team was released around 9:30 p.m. local time. 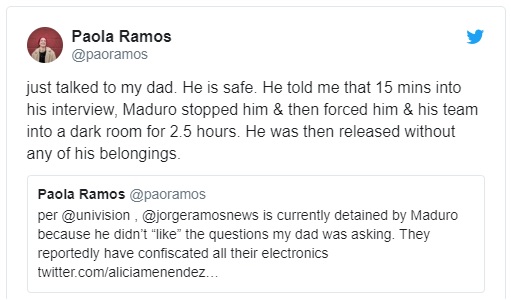 Ramos said the crew plans to leave on Tuesday Feb. 26 for Miami but said he was unsure about his future status as a journalist in Venezuela.

“Imagine, if this happens to foreign correspondents, what is happening to Venezuelan reporters? This is the reality of what’s happening here in Venezuela.” Jorge Ramos concluded.