The Luckiest Gringo in Mexico (Part 4)

Five months ago, on April 2018, Mr. Rob Whitehead sent parts 1 and 2 of his life-telling story “The Luckiest Gringo in Mexico”, now he has finally decided to publish parts 3 and 4!  This is part 4, but in case you missed his previous publications, you can click on the links below and check them out…

Shortly after getting settled in, my new friend Paco Ayvar came to visit me, and we decided to take a walk up La Ropa Beach to the Hotel Calpulli. Just as we were nearing the Calpulli we saw two Mexican girls in bikinis walking towards us. All the Mexican girls I had seen up until then had been wearing clothing at the beach, shorts and t-shirts or blouses, even dresses, but not swimsuits, and certainly not bikinis. Girls in this region were still rather old-fashioned and shy about exposing their bodies. Yet here were two attractive modern looking girls walking our way on one of the most beautiful beaches anywhere, and Paco says to me “I know these girls. I’ll introduce you. The one on the left is Carmelita Sotelo, and the one on the right is Lupita Bravo. The one on the right is also a 24-year old virgin from a good local family, almost like royalty.” I replied we didn’t have girls in “my country” that looked like that and who were still virgins at that age. I was awestruck by her beauty and now intrigued by Paco’s somewhat odd comments. I was also reminded of earlier warnings not to mess with local girls because their family might seek revenge and make me disappear if I got one pregnant. So I was on my best behavior and working hard to suppress raging teenage hormones.

As we got closer Paco greeted them and introduced us. When Lupita looked into my eyes and smiled the world spun and I thought my knees were going to collapse. I realized I couldn’t speak and that she was still staring at me with the face of an angel, like no one I’d ever seen before. I managed to croak out “mucho gusto” and shook her hand. When we touched there was a spark like static electricity. And she continued staring at me, still smiling ever so sweetly.

Paco and Carmelita both saw what was happening and cracked into big grins. Paco asked me if I wanted to ask Lupita to go out dancing that night. I said I didn’t know if I should or how to ask in Spanish. He assured me it was okay and told me to say ¿gusta bailar? Okay, got it.

The world started spinning again and my throat started failing me. I couldn’t see anything else but Lupita’s angelic face with her magnificent smile.

Carmelita spoke English, and she suggested I meet her and Lupita at the Kau-Kan discotheque on La Madera Beach around sunset, one of the popular places where local young people went to socialize and dance.

Since Lupita’s father was the manager of the Hotel Calpulli where I also was allowed to run a tab, she and Carmelita went with him back to town for lunch and siesta while Paco and I enjoyed lunch under their huge teepee-like structure.

After running an errand with Paco to his huerta near El Coacoyul and back to La Ropa, I spiffed myself up and he dropped me off near the Hotel Irma where it was an easy downhill walk to La Madera Beach.

The Kau-Kan was located where the restaurant Bistro del Mar is currently located. It was almost like a cave inside with bare rock walls along the back and subdued lighting. The song “The Night Chicago Died” was playing as I sat down and looked around for Lupita and Carmelita. I didn’t see them so I ordered a rum and Coke and found a table by the wall to wait. Almost as soon as I sat down they showed up.

Because the place was kind of crowded and the music wasn’t that good we decided to walk the beach up to the Chololo disco, just above the beach and below where the Hotel Casa Sun & Moon now sits. 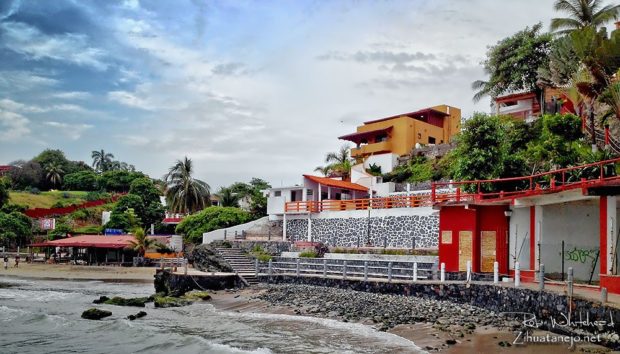 The Chololo was a big hit with the more sophisticated crowd. My friend Jorge Tortuga was the DJ and manager then. This was my first time there, but later on Jorge would ask me to bring my 2 cassettes of disco music someone from New York City had made so that he could copy them. The place always livened up when those cassettes were played.

This first night Lupita and I were interested in learning about each other. We danced a little and smiled at each other a lot. I did my best with my rudimentary Spanish that fortunately I had studied from the 3rd to the 9th grades. So we spent much of that evening talking, Carmelita helping whenever we got stuck on a word or expression. I was determined to speak Spanish with Lupita.

Lupita’s family is one of the most respected in Zihuatanejo. She is almost like royalty, even for all her humbleness. Her father, Don Fernando, was at first the telegraph operator during and after the Revolución. Then he became the radio-telephone operator who made the first direct communication with Mexico City, and later on he was a civil judge. Their first home on the main downtown beach where Lupita was born, next to where the current Cancha Municipal is located, was the first home to have electricity, at first for the telegraph and later for the radio-telephone. Neighbors would visit after dusk and sit around the electric bulb catching up on the latest gossip for an hour or so after dark with Don Fernando and his wife Doña Rosa.

I walked the girls back to Lupita’s home so that I would know where she lived. We had to cross the vado to reach town, a dirt road that went through the shallow part of the lagoon and where you either tiptoed across the rocks and wooden planks placed there or you took your shoes off and waded through the shallow water, and then we walked the remaining block and a half to the Bravo family home on the corner of Juan N. Álvarez and Vicente Guerrero streets, which at that time was pretty much the edge of town. Their 2-story home was located across the street from a small park now called Plaza del Artista with its several shade trees. It’s where we’ve lived ever since Doña Rosa passed away a little over 20 years ago

The next day after my usual morning licuado de papaya, plátano y chocolate I passed by Lupita’s home where I saw her brushing her hair in the upstairs window. I called up to her and told her I’d wait for her in the little park where there was a large fallen trunk perfect for sitting on. Of course her mother, Doña Rosa, also saw me and gave me a hard look of disapproval that only a parent can give. I believe she said something about why didn’t I go play with kids my age. It was expected, but it also reminded me to be on my best behavior.

Lupita and I went and sat on some steps near the entrance to the lagoon called La Boquita at the end of the beach just past the Palacio Federal, now the Museo Arqueológico de la Costa Grande in front of the Vicente Guerrero primary school. She asked me what I did all day. Well, I wanted to be honest with her, so I didn’t hold back.

I told her that I got up from my hammock in the morning, smoked a joint with my coffee, took a hit or two off a bottle of some local homemade mezcal that had a dead fly floating in it, then I walked the mile and a half or so to town to have my licuado de chocolate y papaya,  then I went and hung out at the beach and drank beer and played Frisbee with my friends. Her eyes had gotten wide while I was telling this, and I could tell I’d shocked her a bit. She was smiling when she said as sweetly as a ripe mango: “Oh, eres muy flojo.” Well, I didn’t know what she’d just said, but by the way she said it and the lovely innocent look on her face I assumed it was something wonderful and I nodded my head in agreement with a big dumb grin on my face, smitten.

What I thought was sweetness was Lupita holding back a good laugh.

Lupita told me she had to get back home, so I bid her farewell with a respectable kiss on the cheek, remembering to be on my best behavior but now acutely aware that we were strongly attracted to each other. it was indeed love at first sight.

The mile and a half walk back to the little house at the end of La Ropa Beach I kept thinking over and over to myself: “My sweetie just called me flojo. It must be something wonderful. I can’t wait to look it up in the dictionary.” And I kept repeating the word over and over so I wouldn’t forget it. Flojo. Flojo. Flojo.

Upon arriving to the house I almost ran to my Spanish-English dictionary, flipping quickly to the “F” section.

I thought no, that can’t be it. I must be missing the pronunciation a bit, and I looked all over for a similar sounding word.

Nope. That was the right translation all right. Lupita had a good laugh at my expense and the joke was on me, though she was absolutely right.

That was the last day I ever pretended to understand a word I didn’t know.