At some point in their lifetime, roughly one in three people across the world will develop some form of cancer. In Yucatan, the annual mortality rate for people dying from cancer has increased by 22% since 1990.

It is a disease that ruthlessly attacks anyone without any design or reason. Cancer is conventionally treated through radiation therapy, chemotherapy and surgery but, more and more often, we are being told stories about how our four-legged friends in the animal kingdom are helping cancer patients worldwide. The question is how?

With approximately 47% of households owning a dog, it’s no shock that man’s best friend offers companionship to cancer patients, but some further benefits they provide may surprise you. Dogs have an extremely advanced sense of smell which means that, even in the very early stages, they can detect cancerous cells. Scientific studies have proved this and dogs are now being trained to find cancer in people.

They are also increasingly being used for therapy and are brought in to visit cancer patients and help decrease the sense of isolation that develops during treatment. Research has shown that something as simple as stroking a dog can prompt our bodies to release serotonin, oxytocin, and prolactin, all of which are chemicals in our body that make us feel good. They also decrease cortisol which is a hormone that induces stress.

Similarly, equine therapy is becoming a favorite way of assisting cancer patients through their illness. As a horse’s emotions change to match that of their rider, patients are forced to learn how to handle their own impulses and emotions and, in the process, rebuild their self-esteem and confidence. After the trauma of cancer treatment, being able to leave the hospital and spend a day in stables among these four-legged creatures destresses the patient. 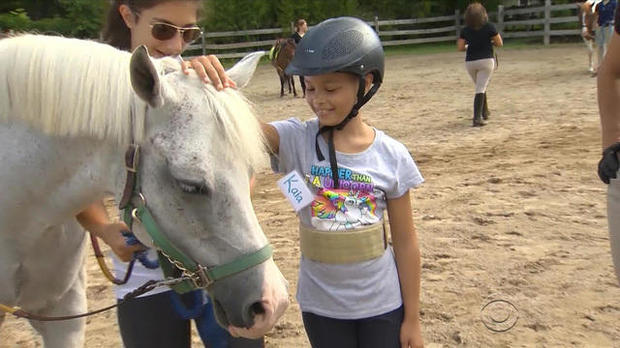 Contact with horses also gives patients a much-needed distraction from the fears of their condition and lessens the feeling of isolation that often develops. Additionally, muscle strength that deteriorates through treatments such as chemotherapy is regained and overall fitness levels are improved upon.

They seem an unlikely animal to help patients through cancer, but elephants are actually one of the most important in this article. Simply put, cancer involves cells growing and reproducing at an uncontrollable rate which, inevitably, invades and destroys the healthy tissue and organs in the vicinity.

Due to the cells having to go through this process of dividing, elephants have a surprisingly small chance of developing cancer probably due to their sheer size.

The phenomenon, which has been dubbed Peto’s paradox, is now believed to occur because elephants have a certain gene that spots trouble in cells and destroys the infected cells before it becomes a problem. Thanks to this discovery, new drugs are being created to fight and prevent cancer.

By Jenny Holt for The Yucatan Times