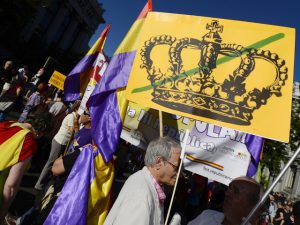 People hold placards and flags of the Spanish Second Republic during a demonstration to demand a referendum on the monarchy following the abdication of King Juan Carlos, in Madrid on June 7, 2014. Dozens of left-wing political parties and citizens organisations came together to demand “A referendum now!” on the future of the monarchy. Spanish King Juan Carlos’ abdication on June 2 revived anti-royalist fervour in the young democracy, sending thousands into the streets clamouring for a referendum on the monarchy itself. AFP PHOTO / GERARD JULIEN