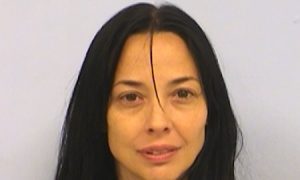 This Wednesday, Oct. 1, 2014, booking photo released by the Austin Police Department shows Dara Llorens, charged with aggravated kidnapping and being held on a $300,000 bond. The FBI and Mexico authorities said 17-year-old Sabrina Allen, whose reported kidnapping 12 years ago was twice profiled on the television show “America’s Most Wanted,” was found Tuesday night in Papalotla, Tlaxcala, near Mexico City, with her mother Dara Llorens. She was 4 years old when she was reported missing by her father in 2002, after she vanished following a weekend visit with her mother. (AP Photo/Austin Police Department)