CDMX. – The Federal Attorney General’s Office (FGR) secured several properties in Santa Fe that it seeks to be returned to the Federation, based on a decree issued during the Porfirio Diaz era, in 1907, without paying compensation, believe it or not.

This decree states that the properties secured by the FGR in Santa Fe are property of the Federation. For this reason, the prosecutor’s office seeks to “recover” the properties without compensation.

The neighbors of Santa Fe, an exclusive area in Mexico City, are afraid of losing their patrimony. In the last few weeks, they have seen how to land adjacent to the buildings they live in has been seized. They warn that the Attorney General’s Office is invading Santa Fe.

The FGR’s Terrorism, Stockpiling, and Arms Trafficking Unit has already seized private land adjacent to a building under construction, where the 54d gymnasium and El Templo were located, and the site of the Shell gas station. 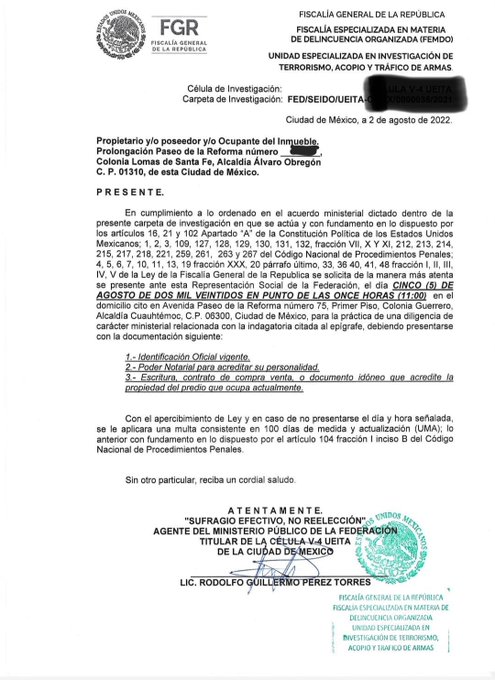 But the FGR’s sights are not only on those properties. Subpoenas in possession of this column reached the neighboring residential buildings QBICOO, Cosmocrat, and Blum.
photo

The legal argument to carry out these seizures, with overtones of dispossession, is a decree dating back to the Porfiriato. However, the conditions for seizing these properties do not correspond to reality. The decree stipulated that it applied to vacant land, and the purpose was to extend forests or assign them to indigenous communities. Therefore, it is not compatible with what is currently happening.

The FGR’s argument lacks such legitimacy that for the mayor of Álvaro Obregón, Lía Limón, this has two explanations: either they are seeking to extort the owners with threats, or the Attorney General’s Office intends to expand its property located on the Mexico-Toluca free highway with its back to the Santa Fe area, where the secured lands are located. In the meantime, the mayor’s office is already interceding on behalf of its residents and gathering evidence of the looming illegality.

The neighbors are anxious. They have already been threatened, and losing their properties would mean losing everything. Many of them are still paying mortgages. All of them have deeds and property titles.

On his Twitter account, Congressman Jorge Triana has systematically denounced that López Obrador’s government is violating the law by going against private property.

Journalist and communicator Manuel Diaz explain in his column in SDP Noticias the following: “Santa Fe, one of the most significant urban developments in Mexico City built in the era of Carlos Salinas by the then regent Manuel Camacho Solis and his team, where Marcelo Ebrard was notoriously involved in the project. During his administration, Camacho laid the foundations for the legal and political transformation of the capital of the Republic through important and emblematic works.

However, due to a principle of inferiority complex, AMLO has always questioned this remarkable development, and now he intends to take it over. For what? Who knows, but he does not hesitate to use all his power. Including his prosecutor Gertz Manero who, as AMLO says, “has no end” when it comes to accumulating wealth, revenge, or complying with any instruction coming from the complexes and madness of his boss against his “adversaries.”

Two factors stand out in this situation: the simulation before a new arbitrary act of our federal authorities and the elimination of adversaries inside and outside the 4T towards 2024.

Behind this is AMLO’s intention to recover, for him and his family, one of the most critical urban complexes in the country, Santa Fe, and to commit a such atrocity, they use a couple of Decrees issued in 1907 by one of the presidents he hated the most, Porfirio Diaz.

Miguel Saucedo, a civil lawyer for individuals and companies against which the Institute of Administration and Appraisal of National Assets (Indaabin) and the Attorney General’s Office (FGR) started claims and civil lawsuits, pointed out that these government agencies have initiated proceedings to recover all the properties built in Santa Fe based on a Porfirian Decree: The two decrees of October 30, 1907, cover a territorial area of 2 thousand 800 hectares and I can tell you without a doubt, that all of Santa Fe is included, ultimately all of Santa Fe, the new zone, part of the towns of Santa Fe, part of Contadero is found, it runs up to Desierto de Los Leones, and the polygon reaches Bosques de las Lomas and is bordering Lomas de Chapultepec.

AMLO’s Simulation
During yesterday’s morning, without being relevant, when faced with a tame question about the recognition of Porfirio Diaz, AMLO let loose, disqualifying Diaz for having handed over the oil to foreigners and then all his string of adjectives and insults to assure:

“They have another term, which is de facto, not de jure, because politics has a lot of simulation, especially since, we return to the same thing, the most important, the master of simulation, Porfirio Díaz, implemented it, and Obregón was very similar to Porfirio.”

Andrés Manuel López Obrador
There are cynics without any modesty. AMLO accuses Porfirio Diaz of the greatest simulator in history while pretending to reopen a Decree issued by him to justify appropriating the real estate without granting the compensation established by law if the decrees proceeded. In fact, in only four years, the one who has become the biggest liar, simulator, and deceiver is Andrés Manuel Lopez Obrador.

But the decree invoked by AMLO has no validity. In 1917 President Venustiano Carranza recognized the property rights of the occupants of Santa Fe. On the other hand, the 1907 decrees were not registered in the Public Registry of Property for 110 years, so legally, they could not apply to anyone who acquired property in that place at that time. As explained, this decree states that the properties secured by the Attorney General’s Office in Santa Fe are property of the Federation. For this reason, the Attorney General’s Office seeks to “recover” the properties without paying compensation.

However, it is to be expected, with certainty, that head of the CDMX government Manuel Camacho and his then Secretary General of Government, Marcelo Ebrard, would have made sufficient legal arrangements for the urbanization and development of what used to be a garbage dump that generated contamination in the City.

In the meantime, Gertz, the great executor of AMLO’s orders, has already launched a violent offensive and ordered the placement of seals on property 435, the site of a structure for billboards, and on a seven-story building at Prolongación Paseo de la Reforma 275, as well as the arbitrary arrest of a citizen just for taking photographs of the secured properties.

Who is the greatest simulator? Porfirio Díaz or Andrés Manuel López Obrador?
In another reading, it could seem that what it is about is to generate a conflict between AMLO’s administration against another of his ghosts. The inheritor of Salinas’ government, and his team, seem to be winning the presidential succession with one of his main collaborators, Marcelo Ebrard.
He is currently above in the vote preferences against the current head of government, Claudia Sheinbaum, who has shown herself to be extremely passive in the face of the intended dispossession. Nevertheless, she, through her Legal Counsel, could well play a role in favor of the inhabitants of that area.

The Santa Fe problem is not a minor one; sooner or later, it will impact the large corporations in this area and the property owners.

In addition to the President’s pettiness, Gertz’s greed and revenge and Sheinbaum’s double standards clearly demonstrate the simulation and hypocrisy of AMLO’s 4T.