Ian has left a trail of flooding, power outages, and house damage as it crossed Florida Wednesday night into Thursday. About 2.5 million people have been left without power due to the hurricane, which has lost strength, becoming once again a tropical storm.

(Florida USA – Agencies) – Destruction from it is catastrophic in places like Fort Myers and Naples, and flooding is severe in numerous parts of the state, including Orlando, a population of 320,000. As winds have slowed down, it is no longer considered a hurricane and has been downgraded to a tropical storm. U.S. President Biden has declared most of Florida a disaster area.

“Ian is now a tropical storm,” the National Hurricane Center (NHC) said in its 5 a.m. Florida time (11:00 a.m. EDT) report. “However, it is still expected to produce strong winds, heavy rain, and storm surge across portions of Florida, Georgia, and the Carolinas,” he warned. The good news is that the hurricane continues to move at a good speed, which reduces the risk of flooding from continued rainfall in the same areas.

The NHC placed the eye of the hurricane at that time a few miles off the east coast of Florida, so it crossed the state diagonally from one side to the other, from south to north, and from west to east. It returns to the Atlantic about 15 kilometers north of Cape Canaveral, west of Orlando.

According to the forecaster, a turn to the north-northeast is expected later in the day, followed by another turn to the north and north-northwest with an increase in translational speed on Friday and Friday night. On the forecast track, Ian’s center, after returning to the Atlantic off the east coast of Florida, is expected to approach the South Carolina coast on Friday and move inland through the Carolinas on Friday night and Saturday.

Maximum steady winds have decreased to near 65 miles per hour (100 kilometers per hour) with greater gust speeds. Once back over the sea, a slight re-intensification is expected, bringing Ian to near hurricane strength as it approaches the South Carolina coast on Friday. However, according to the National Hurricane Center, it is expected to weaken Friday night and Saturday after Ian moves inland.

The combination of storm and tidal surges will still cause normally dry areas near the coast to be flooded by increased water levels moving inland. However, compared to the 12 to 18 feet (about four to six meters) predicted on the West Coast, the maximum water level rise on the East Coast is expected to be between 4 and 6 feet. 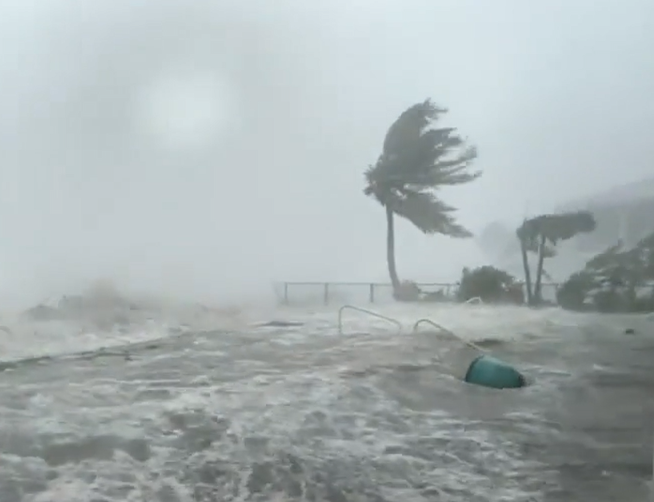 United States President has declared most of Florida a disaster area and has ordered federal aid to assist state, tribal, and local recovery efforts. Federal funding is being made available to those affected in Charlotte, Collier, DeSoto, Hardee, Hillsborough, Lee, Manatee, Pinellas, and Sarasota counties.

The Orlando and Fort Myers airports have joined others, such as Tampa, and have ceased operations. Miami’s, however, has remained operational, although cancellations and delays have been common. In addition, Disney has closed theme parks around Orlando.

As the hurricane moved inland, the rains caused several rivers to overflow and other areas to flood. In addition, the winds have downed trees and some structures and buildings. It is still too early to quantify the damage, which the authorities described as catastrophic.

No deaths or serious injuries have been reported in Florida due to the hurricane. However, the Coast Guard is searching for a boat with about twenty Cuban immigrants that disappeared on Wednesday in the waters of the Florida Keys. The boat was covering its reckless crossing in the middle of a hurricane.