The European Parliament called on Mexican authorities to guarantee protection and create a safe environment for journalists and human rights defenders.

(CDMX – TYT) – The government of López Obrador, without the slightest restraint or use of the most elementary diplomacy, did not take long to respond to the European legislators through a letter that seems to have been written after a drunken barroom confrontation and not by the diplomatic corps of a high-level country. With the stroke of a pen, AMLO squandered years of Mexican diplomacy.

For this government, the almost 700 members of the European Parliament are “sheep” and “uninformed” characters who allow themselves to be deceived by the “Mexican opposition.”

The letter alone portrays López Obrador and his administration in full body. He is an intolerant, irate bully, willing to resort to insults, offenses, lies, or whatever he has to do to evade his responsibility.

The facts are conclusive. During López Obrador’s presidency, more journalists were murdered than ever before. In 2022 alone, seven journalists have been slaughtered. Organizations worldwide, such as the Committee to Protect Journalists or CPJ – consider Mexico to be the most dangerous and deadliest place for journalists outside of an official war zone for a long time.

AMLO’s government does nothing. The mechanisms to protect journalists are a joke because they serve no purpose. Instead, the president openly attacks the press in the morning pulpit with viciousness and impunity. However, there is one thing clear to the European Parliament and the rest of the world. López Obrador’s populist rhetoric was designed to denigrate, dissuade and intimidate journalists, media owners, activists, or anyone against his regime.

The Mexican President’s evident rancor was once again on full display with phrases accusing Europeans of “conquest” and of keeping “complicit silence” in previous governments when, according to him, human rights were violated.

López Obrador’s outburst adds to an already long list of grievances against European countries, including Spain. This administration has embarrassed Mexicans as never before. We must ask ourselves: What is the president looking for with such a foul letter? To break off relations with Europe? to close the doors to that market? To isolate Mexico?

“To the Members of the European Parliament:

Enough of corruption, lies, and hypocrisy.

Regrettably, like sheep, you join the reactionary and coup strategy of the corrupt group that opposes the Fourth Transformation, promoted by millions of Mexicans to confront the monstrous inequality and violence inherited by the neoliberal economic policy that for 36 years was imposed in our country.

Members of the European Parliament know that Mexico is no longer a land of conquest. On very few occasions in its history, the libertarian principles of equality and democracy are enforced. Here no one is repressed. On the contrary, freedom of expression and the work of journalists is respected. The State does not violate human rights as it did in previous governments, when you, by the way, kept complicit silence.

Mexico is a pacifist country that has opted for non-violence. We favor dialogue, not war; we do not send weapons to any country under any circumstances, as you are doing now.

If we were in the situation you describe in your pamphlet, our president would not be supported by 66 percent of the citizens, as published yesterday by the Morning Consult poll, which places him in second place among the world’s leading presidents. Incidentally, with more approval than European rulers.

Next time, get informed and read the resolutions presented to you before casting your vote. And do not forget that we are no longer anyone’s colony. Mexico is a free, independent, and sovereign country.

Evolve, leave behind your interference mania disguised as good intentions. You are not the world government, and do not forget what that giant of the Americas, President Benito Juarez, said: “Among individuals, as among nations, respect for the rights of others is peace.

Government of the Republic 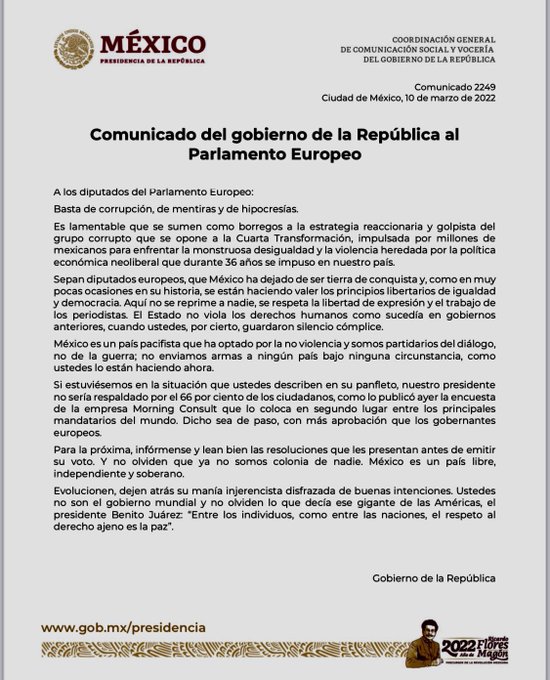 How will the relationship with Europe continue, and how far will the consequences of the outbursts of an angry president go? It remains to be seen. One thing is certain. Andés Manuel López Obrador has achieved something in 3 years of government… to make his country look like a “banana republic.”

The Yucatan Times
Editorial Board.

The editorial board of The Yucatan Times is made up of a group of 9 people of different nationalities and qualifications. They are selected for their background and objectivity, who rely on research, analysis, and individual expertise to reach an accorded view of important issues.