Vila and AMLO agree that land at ‘La Plancha’ will become a public park.

(MÉRIDA, Yucatan – TYT) – As a result of the efforts of Governor Mauricio Vila Dosal, 100% of the land at “La Plancha” will be used to create a public park for the enjoyment of Yucatecans, agreed with President Andrés Manuel López Obrador, in the framework of the supervision of the progress of the construction of section 3 of the Tren Maya (Mayan Train) in the territory.

During a meeting at Military Air Base number 8, Vila Dosal presented several proposals to the President. Among them, an executive project with the design of the Park included a plan that the President decided to support. As a result, the area will be a public space in which 1.4 billion pesos will be invested. This figure includes the cost of the military facilities.

Likewise, the State Government and the Municipality of Merida will cede land to the Armed Forces to build other facilities they need.

Governor Mauricio Vila Dosal thanked President López Obrador and the head of the Secretary of National Defense (Sedena), General Luis Crescencio Sandoval González, as well as the Mayor of Mérida, Renán Barrera Concha, for the donation of land that will allow this project, which will improve the image of this area, to be carried out.

It is worth remembering that this land had already been stipulated to construct military installations. However, upon hearing the neighbors’ requests in the area, Vila Dosal managed and presented projects to ultimately convert this area into a healthy coexistence space that families will use.

Supervision of work on the Mayan Train
Vila Dosal and López Obrador reviewed the progress of the construction of section 3 of the Mayan Train, which goes from Calkiní to Izamal, as well as other projects that will detonate the development of Yucatán, will contribute to the economic reactivation and represent an essential source of jobs for Yucatecans.

In his second visit to the state so far this year, the Governor received the head of the Federal Executive, together with the directors of the National Fund for Tourism Development (Fonatur), Javier May Rodríguez, and of the National Institute of Anthropology and History (INAH), Diego Prieto Hernández; the head of the Ministry of the Environment and Natural Resources (Semarnat), María Luisa Albores González, and the Undersecretary of Expenditures of the Ministry of Finance and Public Credit (SHCP), Juan Pablo de Botton Falcón, with whom he reviewed the progress of this plan as of Saturday.

The Governor and López Obrador reaffirmed the teamwork they have maintained, which translates into development opportunities with this and other plans that contribute to the well-being of the people. In addition, they reiterated their willingness to support this close relationship, to continue promoting actions and programs that represent benefits for families living in the southeast of the country. 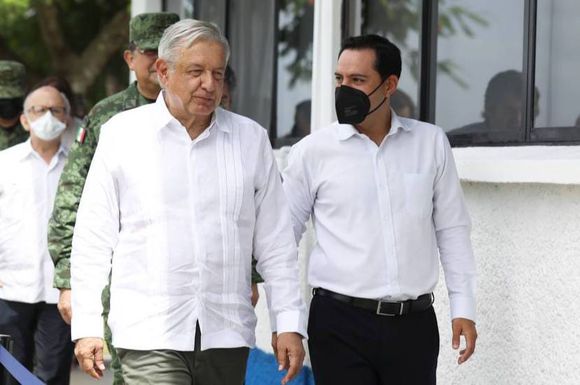 In this sense, it was reported that several announcements would be made in health infrastructure, roads, and energy in the coming days, which will provide welfare to the people of Yucatan.