Is it possible to feel an earthquake in Mérida?

On February 17th, the National Seismological Twitter account reported on a telluric movement southeast of Chiapas, which had a magnitude of 6.2

(MERIDA, YUC. – NATIONAL SEISMOLOGICAL).- Did anyone else feel the earthquake in Mérida? It is the question that a user wrote through a Facebook account on Wednesday morning, so the doubt was immediately raised. For some it caused surprise and for others laughter, since the state of Yucatan is not considered a seismic zone.

And although the comment was taken down minutes later, it generated a reply in several media outlets; however, a question arose as to whether it can tremble in the Yucatan.

Early this Thursday, the National Seismological Twitter account reported on a telluric movement southeast of Chiapas, which had a magnitude of 6.2, the same as felt in Tabasco and some users say that in Mérida, Yucatán.

According to some social network users, the earthquake was felt in Mérida; however, the area is not considered high risk, at least that is how Seismología México exposes it through a study of the Mexican territory.

There are three areas in this: 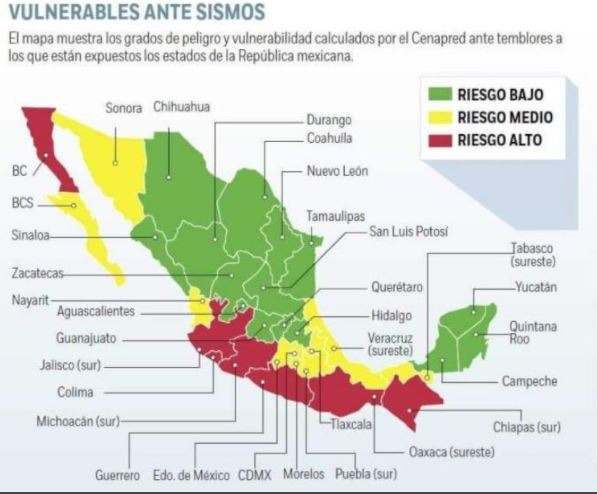 Although Mérida is not in an earthquake zone, this can happen. So much so that in 2017, Meridanos reported having felt an earthquake, the seism had its epicenter in Pijiapan, Chiapas.

Earthquakes have been felt in Yucatan lately, due to its proximity with Chiapas and Oaxaca, but an epicenter has never been registered in the Yucatan Peninsula. But, as the tectonic plates keep shifting, circumstances could change at some point in time.