This Christian festival commemorates the presentation of Jesus at the Temple of Jerusalem, referring to him as the light of the people of Israel.

(MEXICO – TYT).- The holiday of Candlemas has many names in English, such as the Feast of the Presentation of Jesus Christ or the Feast of the Holy Encounter, but in Mexico, it’s simply referred to as el Día de la Candelaria. Even though this religious festival is observed in Catholic church services around the world, Candelaria in Mexico has its own special traditions that don’t exist anywhere else, some of which tie back to Aztec times before Christianity even came to the Americas.

Día de la Candelaria always falls on February 2, exactly 40 days after Christmas (and the same day as Groundhog Day in the U.S.). Supposedly, the reason for the date is because according to early Jewish tradition, a woman was forbidden from entering the temple for 40 days after giving birth. Once December 25 was chosen by the Church as the date for Christmas, or Jesus’ birth, then his presentation in the temple would have taken place February 2, or 40 days later.

In most Spanish-speaking and Catholic countries, the day of the Epiphany on January 6—or Three King’s Day—is generally considered the end of the holiday season. However, since certain traditions on Three King’s Day later tie into Candelaria, some people consider the latter to be the true end of the winter holidays. 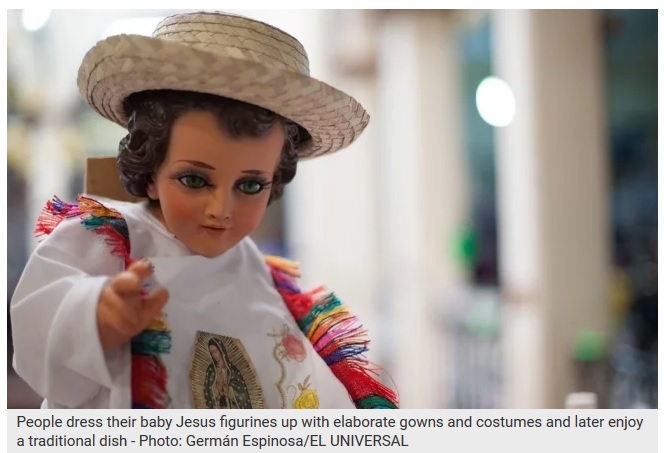 How Candelaria Is Celebrated

Candelaria is not an official holiday in Mexico, nor is it even nationally celebrated (although it can coincide with Constitution Day, which is celebrated on the first Monday in February. Special Mass services are held to commemorate the day and religious citizens are most likely to stop by their local church. At home, families may host a special dinner that usually involves traditional holiday foods, especially tamales.

Even though the day isn’t widely celebrated in Mexico, there are some individual locations that make more of a fanfare than others. Probably the most important Candelaria festivities take place over an entire week in the Gulf town of Tlacotalpan in the state of Veracruz, and the celebrations often involve bull runs and lots of local food.

In the Jalisco town of San Juan de los Lagos, home to the basilica of the same name, the Candelaria is also a major city-wide event. The cathedral is the second-most visited pilgrimage site in Mexico—after the Basilica of Guadalupe in Mexico City—and February 2 is one of the most important Catholic observances of the year. Pilgrims from across the country and abroad descend on the city for a week-long celebration.

If you’re staying in Mexico City and want to experience the religious aspect of the holiday, head to the small neighborhood called La Candelaria in the southern part of the Coyocan borough—not far from the Diego River Anahuacalli Museum. While not as famous as other parts of this popular tourist district, La Candelaria is considered one of the most traditional neighborhoods in all of Coyoacan.

Outside of church services, the most celebrated aspect of Candelaria at home is a big family dinner, usually with tamales. The tradition actually begins a month earlier on Three King’s Day when families eat the typical holiday cake called rosca de Reyes, which has a small figurine of baby Jesus baked into the dessert. The person who finds the figurine in their slice of rosca is in charge of hosting the Candelaria party in February—and providing the tamales.

Another important custom in Mexico, particularly in areas where Catholic traditions run strong, is for families to own a doll-sized version of baby Jesus called Niño Dios, or Christ Child. The Niño Dios is first placed in the home Nativity scene on Christmas Eve and then given gifts on Three King’s Day. On Candelaria, people dress up their Niño Dios and bring it to church with them, just as Jesus was believed to have been presented.

Candelaria in English is known in the Catholic Church as the Feast of the Presentation of Jesus Christ because it commemorates the day when his mother, Mary, brought him to the temple for the first time. It’s one of the oldest celebrations in Christianity, dating back to at least the fourth century in ancient Jerusalem.

It’s also sometimes known as the Feast of Purification, since traditions at the time considered a woman “impure” until 40 days after childbirth. Candles, which are considered a symbol of the Virgin Mary’s purity, became a hallmark of the observance (hence the name, “Candelaria”).

While the feast day is fully rooted in Christianity, some Candelaria traditions in Mexico date back to before the arrival of Spaniards on the continent. The importance of tamales on Candelaria along with the beverage atole—both of which are made from corn—comes from the importance of maize to Indigenous Pre-Hispanic populations. In fact, even the date February 2 coincided with celebrations in the Aztec calendar to ask the gods for rain and a bountiful harvest.