(MÉRIDA, YUC. – STATE GOVERNMENT).- The conservation of the Maya jungle is promoted in Yucatan through the Prosperous and Sustainable Communities program that contemplates channeling 30 million US dollars between 7 states of the Southeast of Mexico during the next 5 years.

The strategy has a focus on supporting communities that carry out sustainable activities and is in charge of the non-governmental organization The Nature Conservancy (TNC) and the United States Agency for International Development (Usaid). 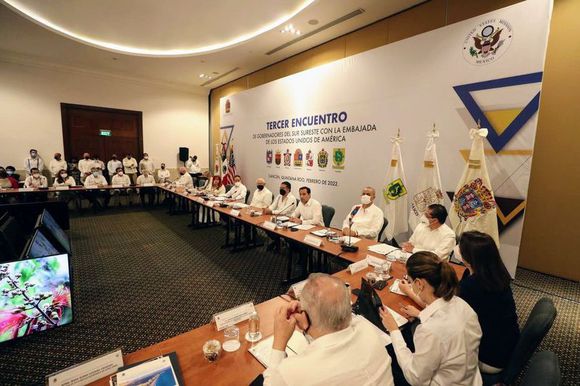 The Governor signed an agreement with the TNC organization and USAID to implement conservation actions. (Photo: Sipse)

On Wednesday, February 23rd, in Cancun, Quintana Roo, Governor Mauricio Vila Dosal signed an agreement with the TNC organization and USAID to implement actions for the conservation and protection of the Maya jungle, the second largest tropical forest in the American continent.

Within the framework of the third Meeting of Governors of the Southeast of Mexico with the Embassy of the United States, Vila Dosal signed the aforementioned agreement, in the presence of the ambassador of that country in Mexico, Kenneth Lee Salazar, together with the governors of Campeche, Layda Sansores San Roman; Quintana Roo, Carlos Joaquín González, and Tabasco, Carlos Manuel Merino Campos, as well as the representatives of TNC, USAID and the governments of Oaxaca, Chiapas and Veracruz.

The Maya jungle, is the second largest tropical forest in America, after the Amazon, with more than 20 different ecosystems; it provides shelter to big cats, such as the cougar, margay, ocelot, jaguar, and jaguarundi, as well as countless rare and endangered species of mammals, birds, reptiles and amphibians.

Also, it concentrates 30% of biodiversity, with the highest rates in the country, representing 21% of the national territory, so it is interesting to protect this important green lung and turn this into employment opportunities, taking care of this valuable Natural Capital. .

This strategy contemplates an investment of 30 million US dollars between the 7 states, during the next 5 years, under a focus on supporting communities that carry out sustainable activities, and adoption or continuation of knowledge.

In addition, investments of 60 million dollars will be attracted from companies or foundations, to develop projects that provide tools to carry out green practices, for the benefit of some 10,000 producers.