Citizens join the demand for freedom against AMLO.

An unusual citizen protest against President Andres Manuel Lopez Obrador for his attacks against journalist Carlos Loret de Mola and in defense of freedom of expression sprouted on Friday night in social networks and messages.

Convened by the organization “Sociedad Civil México” on its account @SocCivilMx, more than 60 thousand people participated on Friday night in a Twitter Space (a live audio forum to which users of the social network connect) linked to the hashtag #TodosSomosLoret (WeAreAllLoret).

The virtual protest forum ended around dawn, but users replayed the recording of the debate throughout Saturday to break the record as the most listened to Space in Spanish worldwide by accumulating more than one million listeners at 2000 hours on Saturday, a Twitter spokesperson told REFORMA newspaper.

Thousands of people, including artists, comedians, intellectuals, journalists, politicians, and professionals, spoke at the forum. Even the U.S. twitted:

We are appalled by the situation of journalists in Mexico. The murder of Heber López, founder of Noticias Web, is an abhorrent act. A comprehensive investigation to find those responsible is indispensable. #ZeroImpunity #NiUnoUnoMás (ZeroImpunity #NiUnoMás)

The common message was the rejection of the President’s remarks in his morning conference against Loret de Mola and the exhibition of his personal information. The criticism against AMLO’s government grew.

They accused the violation of the rights of freedom of expression and information, the General Law for the Protection of Personal Data, and the Federal Tax Code by disclosing the personal data of the communicator. 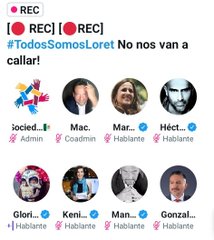 Dresser warned that the President defames, discredits, and destroys the reputation of those who have a different opinion. “(La mañanera) is a Roman circus, where the emperor raises or lowers his thumb to define fate.” she accused.

Martha Debayle expressed her opinion that it is not only about journalists or public people, but about all Mexicans who are exposed to a discourse of the Executive in which success is condemned and criminalized, and it is better to be mediocre not to progress.

When asked by REFORMA about the reactions, Loret de Mola said: “I confess that I still have not recovered from the astonishment and emotion. There were moments in which the words I heard reached me very deeply, very deep inside. They moved me as I had never been moved before”.

He added: “I am very clear that it was not about me: the unusual aggression of the President against me was just a drop, but it spilled the glass. The glass had been filling up with his abuses of power, his authoritarian displays, his attitudes of an aspiring dictator. There were many aggrieved before and, I fear, there will be many more to come”.

Another forum was also opened with the hashtag #NoTodosSomosLoret with mainly pro-AMLO journalists. With fewer participants, they insisted on the need not to focus the discussion on a particular case but on problems experienced by journalists, particularly those related to security, which affects freedom of expression.

What is a Twitter Space?
A Twitter Space is the place where live audio conversations take place. Twitter opened the option in 2020 for users to tweet and talk live. “From tweeting to speaking, reading, and listening, Spaces encourages and unlocks more real and open conversations with the depth and power that only the human voice can bring,” a Twitter spokesperson told Grupo REFORMA.