6.2 magnitude earthquake in Guatemala was felt in Merida

Early this Wednesday, February 16, a strong earthquake occurred in Guatemala; In social networks, citizens assure that they felt in Mérida.

(MERIDA, YUC. – CIVIL PROTECTION).- An earthquake with magnitude 6.2 was registered in Guatemala , however, social network users report that it was felt in Yucatan, Chiapas, Campeche and even in Tabasco.

Early on Wednesday, February precisely at 01:12 a.m., an earthquake of magnitude 6.2 was recorded that had an epicenter off the coast of Guatemala. In that neighboring country, structural damage is reported in some homes , while people had to leave their homes in the middle of the night, since the telluric movement managed to feel strongly.

Citizens report that the earthquake was felt in Mérida

Through social networks, some users have commented that they managed to perceive the tremor in the Yucatecan capital. It was through the group ” Mérida en el tiempo, Yucatán en la historia “, where a user reported having felt the earthquake at the same time but in this city. 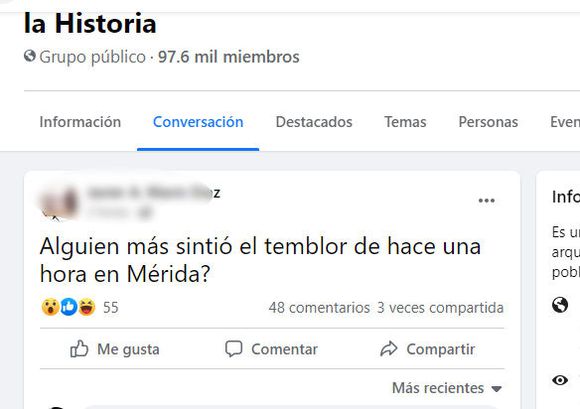 His report was followed by other comments that similarly claimed to have had the perception of the earthquake at the approximate time. It should be noted that at the moment there is no official information on the perception of the tremor in Yucatan , however, it would not be the first time that a phenomenon of this type has been felt very slightly in our State.

At the same time, the Sky Alert alert system reported on its Twitter account that the earthquake was perceived even in Villahermosa, Tabasco, although with very slight intensity.

Likewise, the National Institute of Seismology, Volcanology, Meteorology and Hydrology (Insivumeh) of Guatemala, reported that the tremor occurred at 01:12 local time (07:12 GMT), and was sensitive throughout Guatemalan territory.