The exceptional gastronomy of Yucatan for the world.

The gastronomy of Yucatan is one of the most delicious and valued in Mexico. Its origin, as it could not be otherwise, is due to the Maya, who liked to cook tasty, aromatic recipes with lots of seasonings.

MERIDA Yucatan (Times Media Mexico) – Yucatan is a state that differs from the rest of Mexico in many ways. One of them is in its peculiar gastronomy, recognized worldwide. It has similarities with others, but at the same time, it is unique. Just as in India, spices and chilies are used to form a paste called “currie” in Yucatan; this mixture is called “recado,” and it involves a complex culinary methodology.

Yucatecan gastronomy, although it is something rooted and traditional of the Yucatan Peninsula, has adapted to the times and to the new ingredients that come from all corners of the world. Hence, its flavors have been mixed with Lebanese, Chinese, or Spanish food, to name a few.

Here are some of its most representative dishes

Lime soup
It is a soup prepared with lime juice, chicken, tortilla strips, onion, coriander, avocado, chicken, and garlic. Its flavor is citric, rich, and robust, perfect for before the main course.

Panuchos
A simple but flavorful dish, it is one of the most popular dishes in the Yucatan Peninsula. Panuchos are soft corn dought tortillas stuffed with beans and fried, served with meat (cochinita pibil, chicken, roast pork) and lettuce, onion, avocado, tomato, and a spicy habanero sauce.

Papadzules
The main ingredient of this dish is the pumpkin seed sauce and epazote, and fried tomatoes sauce filled with eggs. They are amazing!

Poc Chuc
An extraordinary Yucatecan dish. These are pork fillets marinated in sour orange and cooked on the grill. It is served cut into pieces or whole with chopped roasted onion, tomato, and a sauce prepared with sour orange, tomato, coriander, and onion.

Huevos Motuleños
These fried eggs are possibly the most typical breakfast in Yucatan. They are accompanied by a tomato sauce and various toppings consisting of cheese, ham, beans. They are served on top hard-fried tortillas.

Escabeche Oriental
It is a dish that originated in Valladolid Yucatan. It consists of chicken or turkey marinated in a coriander sauce, cinnamon, vinegar, cumin, salt, pepper, and garlic. The meat is then cooked in water and sour orange juice and finally fried in butter flavored with garlic and herbs. 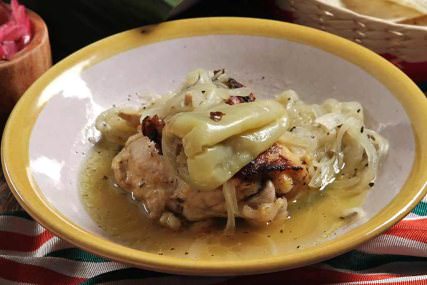 Queso Relleno – Stuffed Cheese
One of the most typical dishes of Yucatan has Hollandese cheese as its main protagonist. But as we explained before, Yucatecan cuisine incorporated many ingredients from Europe in many recipes. This is a perfect example. The stuffed cheese is prepared with a ball of cheese that is slowly cooked in the oven. The cheese is stuffed with meat and spices and is served with a sauce made from broth, flour, and butter and an additional sauce made of tomatoes. 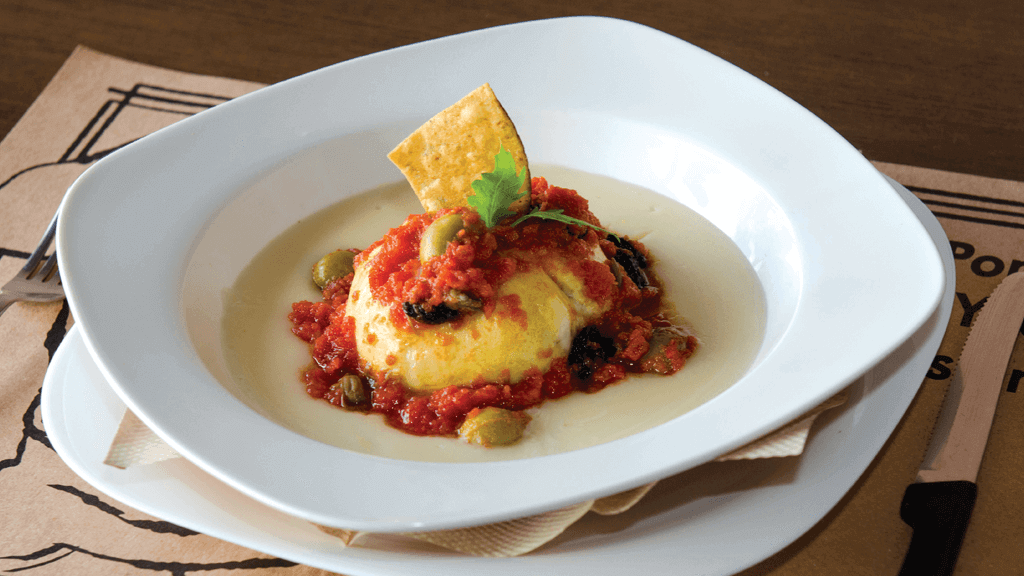 Cochinita Pibil
Undoubtedly the most famous dish in Yucatecan cuisine. It is pork marinated in achiote and traditionally cooked in an oven under the ground, inside banana leaves. It is usually eaten in tacos or french bread. It is accompanied by chopped red onion previously marinated in sour orange and habanero chile.