Israeli artillery pounded northern Gaza early Friday in an attempt to destroy a vast network of militant tunnels inside the territory, the military said, bringing the frontlines closer to dense civilian areas and paving the way for a potential ground invasion.

Israel has massed troops along the border and called up 9,000 reservists following days of fighting with the Islamic militant group Hamas, which controls Gaza. Palestinians militants have fired some 1,800 rockets and the military has launched more than 600 airstrikes, toppling at least three apartment blocks.

The stepped-up fighting came as communal violence in Israel erupted for a fourth night, with Jewish and Arab mobs clashing in the flashpoint town of Lod. The fighting took place despite a bolstered police presence ordered by the nation’s leaders.

Masses of red flames illuminated the skies as the deafening blasts from the outskirts of Gaza City jolted people awake. 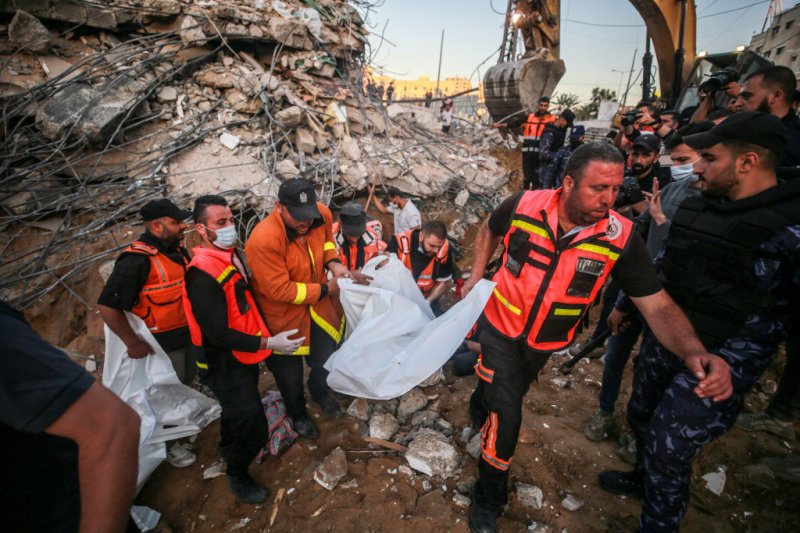 Palestinian civil defense teams take part in rescue works at the rubble of a building belonging to a Palestinian family after Israeli conducted airstrikes in Beit Lahia, Gaza on May 13, 2021. Mustafa Hassona–Anadolu Agency/Getty Images

In the northern Gaza Strip, Rafat Tanani, his pregnant wife and four children were killed after an Israeli warplane reduced the building to rubble, residents said. Sadallah Tanani, a relative, said the family was “wiped out from the population register” without warning. “It was a massacre. My feelings are indescribable,” he said.