“El baile de los 41”: the homosexual party that scandalized Mexico at the beginning of the 20th century.

On the morning of November 18, 1901, Mexico City dawned to witness the most resounding scandal in the history of early twentieth-century Mexico.

Yesterday I had the opportunity to watch the Netflix movie “The 41 Club.” I am not a film critic, but I can say I found the film very interesting. The film is about the story of a group of men, homosexuals, who had a secret social club called “The 42 Club.” But, beyond the film, which I highly recommend, this story is very significant in the shameful history of our country.

In the early morning of Sunday, November 18, 1901, in a house marked with the number 4 of “calle de la Paz”  (today is called “Ezequiel Montes”, in the Tabacalera neighborhood), the police broke into a private party where 42 men were dancing with each other, most of them from aristocratic families.

The surprise of the military police was great since, of those 42 men, 21 were dressed as women, and in a bedroom, there was lying a young man that the chronicles of the time identify as “El Bigotes Rizados” (the curly-haired mustache). The rumors and legends of that raid said that this “well-endowed” young man was the prize of a “raffle” among the attendees. The press of the time echoed the moral shock of that raid. There were homophobic taunts, rumors, and legends about “The aristocracy of Sodom,” as the newspaper “El Hijo del Ahuizote” called those arrested.

While the names of the attendees were never explicitly given, several newspapers of the time noted them as “aristocrats.” The newspaper “El Popular” revealed those dressed as women “pretended to flee to take off their dresses, but when the police realized that it was something serious, they did not let any of the 42″.

This is where the story begins to get complicated. In addition to the scandal that the news meant, the press reports insisted that the detainees were 42. However, the authorities insisted they were 41 detainees. Society gossip spread like wildfire and has survived to this. Among the detainees -and dressed as a woman- was Ignacio de la Torre, son-in-law of President Porfirio Diaz, married to Amada Diaz, his eldest and most spoiled daughter.

According to the rumors of the time, Ignacio de la Torre’s name disappears from the list. General Porfirio Diaz tried to silence the scandal by all means at his disposal, but he could not, and the gossip reached the ears of Amada, his daughter.

According to historians such as Carlos Monsivais, Don Porfirio Díaz himself sent for his daughter to tell her firsthand what had happened and that Ignacio was let free to avoid a social scandal, even though things were already being said about him, Monsivais writes in his chronicle “Los 41 y la gran redada”. He assures that in Ignacio de la Torre’s hacienda, in Morelos, a very young Emiliano Zapata worked for a while. He went to Mexico City for the first time as Ignacio’s horse-groom. It is said that because of this trip Zapata’s homophobia worsens.” Monsivais mentions that perhaps Ignacio de la Torre tried to impose on him, using his privileged status.

The historical rumors about that men’s party inflamed the Mexican popular imagination. Historically a macho, homophobic and double standard society. Today, as a lamentable witness of that event, the engravings of José Guadalupe Posadas illustrate the episode, from beginning to end, with acid images accompanied by mocking and homophobic phrases or verses. The number “41” thus became the infamy of homosexuals in Mexico City.

Francisco Uriquizo, historian and chronicler of the Mexican Revolution, wrote about it: “In Mexico, the number 41 has no validity and is offensive to Mexicans. There is no division, regiment, or battalion in the army that bears the number 41. They go up to 40, and from there, they skip to 42. There is nothing that has line 41.”

The most regrettable part of this story was the bestial punishment to which some of the 41 were subjected. -Those unable to “purchase” their freedom- The day after the raid imposed on them a peculiar punishment: to sweep the streets dressed as women, as they had been found, while the mob attacked them. Then they were “expelled” from Mexico City and sent to the jungles of the Yucatan Peninsula, assigned to military service. The sad reality is that many were sexually abused -among them Ignacio de la Torre himself, although that is another story- and several lost their lives due to the feral heat, the mosquitoes, and in general, the inhuman conditions of the peninsula at that time.

Five years after this episode, a novel was published. Its title: “Los cuarenta y uno: novela crítico-social”, signed with the pseudonym of Eduardo A. Castrejón with the illustrations by José Guadalupe Posadas.

In the book, one can observe in detail the enormous rejection of homosexuality and transvestism at the time. It is profuse in detail, describing everything from the preparations for the party to the moment of the deportation to Yucatán. From then on, the subject fed essays and chronicles that review the homophobic climate that prevailed for a long time in the country’s capital and unfortunately is still present in many states of the Mexican Republic.

In Mexico City’s Centro, there is a commemorative plaque as a way of making amends to the anonymous protagonists of that party on November 17, 1901, that ended in a raid, which would echo this story through the past century. The plaque, in a way, inaugurates the defense of the civil rights of homosexuals in Mexico. A battle that has been long and is far from over. 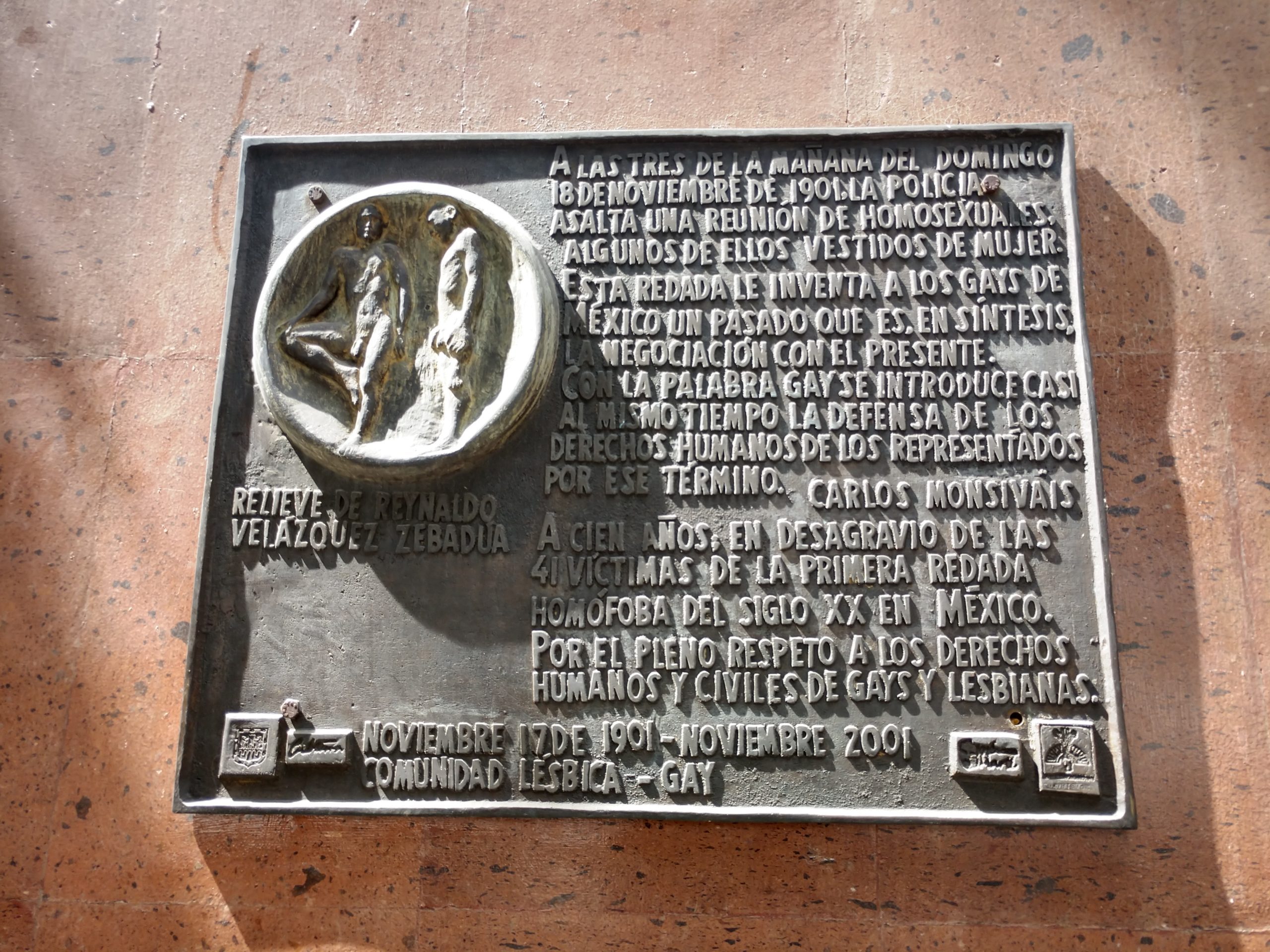