Extreme heat in the Yucatan Peninsula.

The heatwave in the Yucatan Peninsula will be one of the most intense in years.

MERIDA Yucatan (meteored.mx) – The Yucatan Peninsula is experiencing one of the most intense heatwaves in recent years. Temperatures of more than 45°C are expected in several areas.

Forecasts indicate that the intense heat currently affecting the peninsula will last throughout this week and into part of next week, predicting maximum temperatures between 40°C and 45°C in most of Campeche and Yucatan as well as western Quintana Roo. It is not excluded that in some areas of Campeche, the 45°C barriers will be surpassed. It is also estimated that the thermal sensations due to the combination of heat and humidity will reach or exceed 50°C.

The heatwave affecting the Yucatan Peninsula would be similar to those of 2015, the year in which the heat was historically the most intense in the region. In recent years, the hottest April was in 2015, leaving some records, such as when up to 49°C were recorded in Santa Elena and 43.6°C in Merida; absolute maximum value since records have been kept in the Yucatan capital. Likewise, in that year, there were 11 consecutive days of maximum temperatures above 40°C in the city. Last April 2020, the number of consecutive days of heat above 40°C was 8. 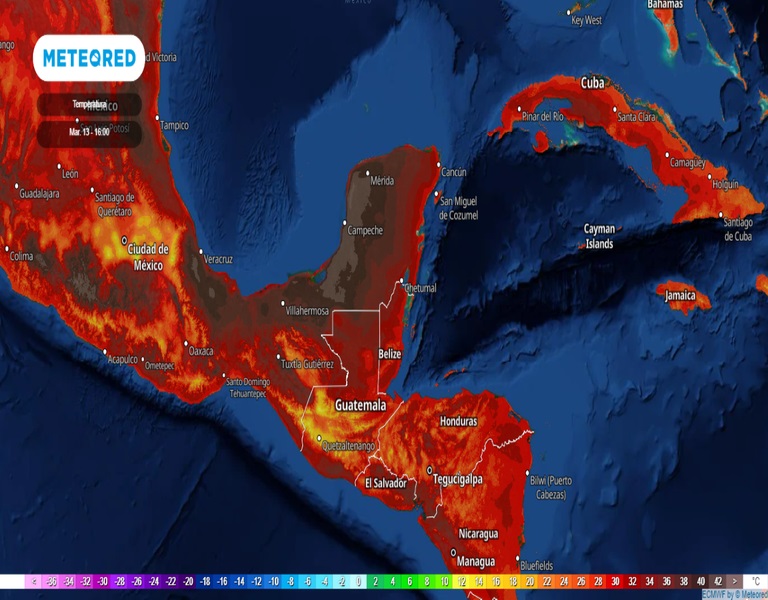 It is likely that in the course of this warm wave, some heat records will be reached or surpassed in the area. It will be close to the record of days with the heat of more than 40°C in Merida of last 2015. It is forecasted that this value will be surpassed all week, with maximums of 40.4°C and 42.6°C, respectively.

Temperatures of up to 45°C or more in the region.
In this sense, the population, in general, is advised to stay hydrated and not to expose themselves to prolonged exposure to sunlight between 11 am and 2 pm, also due to the high UV indexes that will be present (close to 10 units). Likewise, the intense heat and hot/dry winds in the area will increase the probability of fire formation. In case of detecting any, report immediately to 911.