The missing woman’s father believed something happened when they were returning from Mexico City to Guadalajara. Before losing contact, he was able to see them on a video call.

MEXICO CITY (SinEmbargo) – Five family members, three adults, and two minors disappeared while returning to Guadalajara, Jalisco, from a vacation trip to Mexico City. The last time they heard from, they were near the municipality of Acatic.

On March 20, Jimena Romo, 24, left her home in Jalisco’s capital with her husband, Julio Villaseñor, and their little daughter Julia Isabella, a one-year-old baby. They went to Mexico City to spend a few days there, but since March 24, her family has not heard from them. Nor has there been any communication or clues as to where they may be. The couple was accompanied by Virginia Villaseñor, Julio’s sister, and their 9-year-old son Iker. 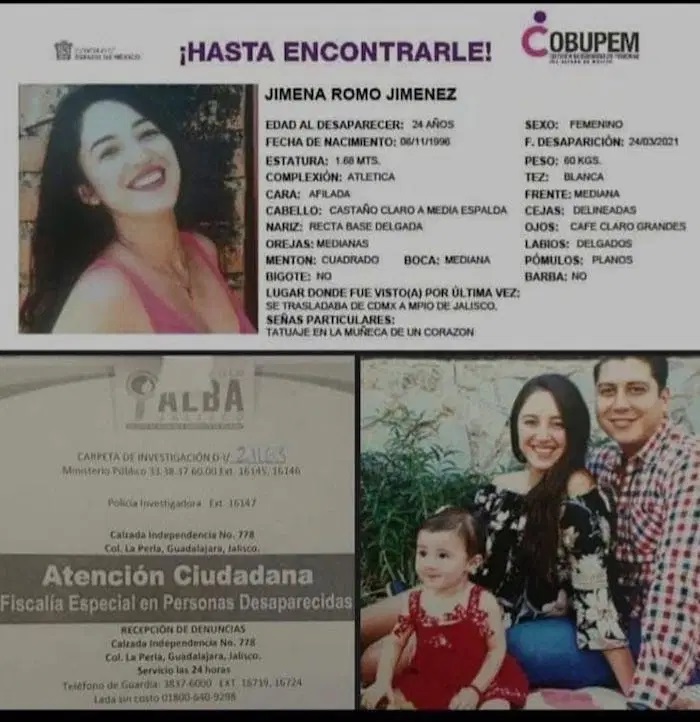 The relatives of the missing persons have circulated the search cards. The five people were traveling in a white 2019 Mazda van with license plates JPK2293. So far, the vehicle has not been located.

“I was in communication with my daughter Jimena every single day since they left for Mexico City. I was able to communicate with them and even see them by video call, and at no time did I notice that there was anything strange or anything out of the ordinary. So we suspect that they have disappeared on the way back to Guadalajara,” said Jimena’s father.

The man requested help from the U.S. Embassy in Mexico since his daughter has dual citizenship. “I was thinking of heading to Mexico and searching by road, but our hands are tied,” said the man. The cell phones of the missing adults are turned off,” he reported.

Salvador assures that he has already filed a missing person report. “It’s been several days. The authorities have not told us anything. They have not notified us, we have not received a single call. We are desperate and need all the help we can get”.

The man asked members of the Senate of the Republic, the Jalisco State Prosecutor’s Office, and the corresponding authorities in Mexico City to help him reunite with his loved ones. In social networks, relatives, and friends of the disappeared share photographs of them, search cards, and solidarity messages.