AMLO received the President of Bolivia, Luis Arce at the National Palace

The Mexican president will have the Bolivian president as a guest in his traditional morning conference.

México, City, (March 24, 2021).- The president of México, Andrés Manuel López Obrador, received his Bolivian counterpart, Luis Arce, this Wednesday morning. López Obrador waited for the Bolivian president at the south door of the National Palace. Arce got out of a white truck and headed for the door where the Mexican receive him with a warm gesture simulating a hug, which due to sanitary measures due to the pandemic could not be given.

After, in the Patio de Honor of the National Palace, the protocol of welcoming President Arce began. After the Mexican national anthem and of Bolivia anthem, the two leaders headed inside the enclosure. 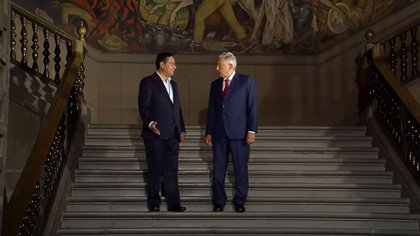 The president of Bolivia, Luis Arce Catacora, makes an official visit to Mexico from March 23 to 25, 2021, in response to the invitation of President Andrés Manuel López Obrador, to participate as a guest of honor and distinguished speaker in the commemoration of the Day of the Victory of Chakán Putum. The event will take place on March 25 in Champotón, Campeche, and commemorates the historical resistance of the native peoples during the invasion process. 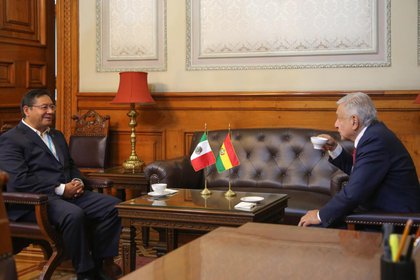 President Arce’s visit takes place on the occasion of the 190th anniversary of the establishment of diplomatic relations between Mexico and Bolivia, and is the president’s first visit abroad since he assumed the Presidency in November 2020. Luis Arce returns to the country as Head of State, after his stay in Mexico derived from the events of October 2019 in that country

The official visit of President Arce includes various activities, among which a guard of honor in honor of the Niños Héroes stands out at the Altar a la Patria, in Chapultepec, as well as a visit to the Old City Hall, where he will be declared a Distinguished Guest of Mexico City. It will end with a solemn session in the Senate of the Republic.

Minutes after 7 in the morning, the presidents appeared in the hall of the National Palace where the “morning” takes place daily. 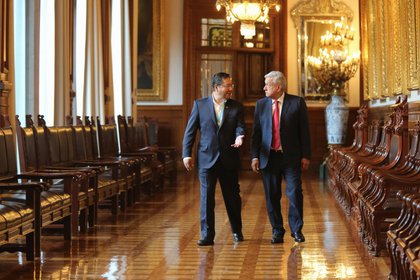 López Obrador welcomed the Bolivian president there, recalled the episode in which Evo Morales was forced to resign from the presidency, and assured that “they represent the dignity of an entire people.”

“He is the result of a popular indigenous movement in Bolivia that demonstrated a new way of governing in favor of the people and especially in favor of the poorest, the marginalized, it was a government that emerged after dictatorships, authoritarian regimes, a government headed by President Evo Morales, a successful government for more than a decade, Bolivia grew more than any other country in the American continent, they recovered their natural resources and most importantly: they lifted millions of Bolivians out of poverty, ”said the Mexican president .

The Mexican president assured that Bolivia went through a complicated situation, when Evo Morales had to leave Bolivia, he said that despite the harassment and polarization, the democratic path was chosen”. 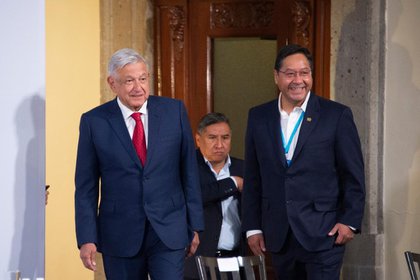 For his part, Arce Catacora, thanked the President of Mexico for the invitation, and said with “double joy”, because the Mexican government sheltered him in difficult times.

“That is why President Andrés Manuel López Obrador, for me it is particularly double joy to be here, to share with you the celebration of that important battle, but for me it is also symbolic to come to the country that sheltered me, to the country that showed solidarity with the process of change in Bolivia; and that today we come to tell President Andrés Manuel López Obrador, we are recovering our democracy, we are recovering our process in Bolivia ”, said the Bolivian president.