One of the effects of the economic recession caused by the covid-19 pandemic is that the world was flooded with dollars.

UNITED STATES (BBC) – The U.S. Federal Reserve (FED) – whose mission is to control the country’s monetary policy as all central banks do – drastically reduced the interest rate to almost 0%.

And since the interest rate is equivalent to a country’s cost of money, the lower it goes, the less its currency is worth.

At the same time, the FED gave free rein to the printing of banknotes to buy bonds (both in the private and public sectors) to mitigate the crisis’s effects.

So much so that 2020 was the year in which more dollars were printed than ever before. That injection of money made it possible to finance the increase in fiscal spending and gave oxygen to the markets.

But at the same time, it helped push down the dollar’s value against the world’s main currencies in the last ten months.

This can be seen in one of the indices that track the currency’s evolution, the Bloomberg Dollar Index (BBDXY), which reached a high of almost 1,300 points on March 23. And from then on, it began a fall that has not let up until now, as the following chart shows. 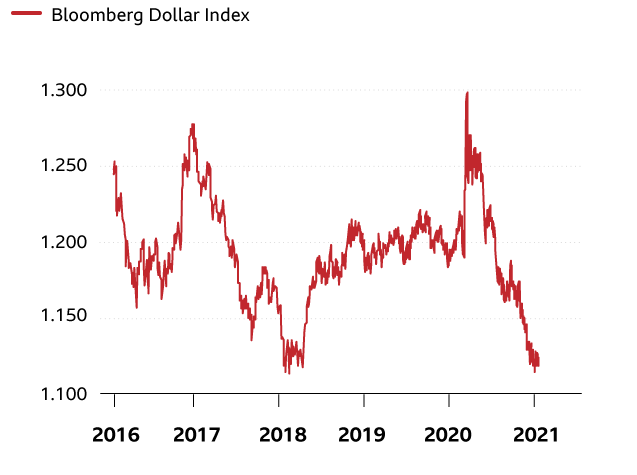 This is a fall of more than 12% in the last ten months (a percentage that may vary slightly depending on the index used to track the currency’s evolution).

It is currently at its lowest level since the beginning of 2018, and many experts agree that the currency will continue to depreciate.

“The dollar will continue to fall.”
“The dollar’s plunge has just begun,” Stephen Roach, a professor at Yale University and former chairman of Morgan Stanley investment bank in Asia, tells BBC World.

The academic predicts that the currency could fall more than 35% by the end of this year based on three main reasons.

The first is that there is a sharp increase in the U.S. current account deficit, i.e., the country pays more abroad to exchange goods, services, and transfers than it receives.

They project that this deficit will continue to drive the currency lower.