“Nonsense and irresponsible”: criticism against AMLO for refusing to wear face mask after recovering from COVID-19

The president of Mexico assured that he will not use it because “it can no longer be contagious”, despite the fact that his own anti-coronavirus czar in the country, Hugo López-Gatell, recommended keeping it even in vaccinated people.

The criticisms were immediate after the president of Mexico, Andrés Manuel López Obrador , confirmed his refusal to use face masks this Monday, after the president recovered from COVID-19 , in a position that he has taken with few exceptions since the beginning of the health crisis.

The senators of the PAN (National Action Party), the main parliamentary opposition, described as “unheard of and irresponsible” the refusal of the president to wear face masks and follow the necessary sanitary measures to avoid contagion by Covid-19, and questioned the handling of the crisis by the Morena government, the party that López Obrador founded and which controls both houses of Congress.

IRRESPONSIBLE! This is Morena, faced with the serious health crisis, without having tamed the pandemic, with infections on the rise, they dare to contradict the recommendations of health experts and the WHO (World Health Organization). It is no coincidence that we have a record of deaths ”, PAN senators published on their official Twitter account. 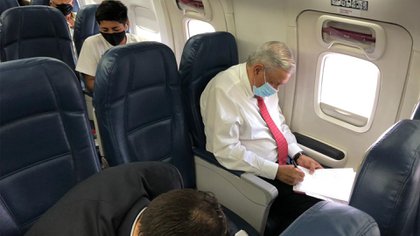 AMLO has used face masks on few occasions, including a state visit to the US on the occasion of the entry into force of the T-MEC (Photo: Cuartoscuro)

On the other hand, the PAN senator Kenia López Rabadán assured that López Obrador’s decision regarding the use of the mask was “a monument to irresponsibility.” ” The message that the President of the Republic gives today, returning from having COVID-19, is a shame, it is irresponsible not to wear a mask,” he said at a press conference.

“And after all those blessings from his people, it seems like AMLO is not able to recognize the importance of his mandate and send a clear message to use the mask, it is that it shows that before and after the Covid he is irresponsible, ” he said.

Finally, the senator assured that “clearly today Mexicans are dying and clearly today Mexicans do not have a vaccine because this government did not do its job .” Until Sunday, Feb. 7, the administration collects 710.198 vaccinated nationwide , awaiting the arrival of various doses of AstraZeneca and Sputnik V . 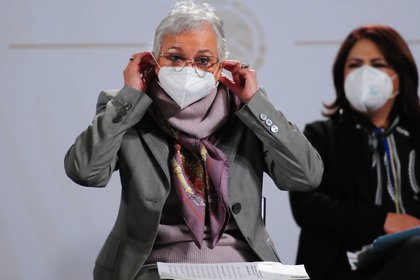 Despite the fact that AMLO refuses to use it, members of his cabinet do wear face masks, sometimes even in his presence (Photo: Daniel Augusto / Cuartoscuro)

The national leader of the opposition PRD (Party of the Democratic Revolution), Jesús Zambrano, was added to the questions , who assured that López Obrador’s position regarding the use of the mask was “inadmissible” .

He also said that it was “a lack of respect for citizens” to insist with the argument that “it is not contagious. ” In addition, the leader added the hashtag in his Twitter message #YoNoLeCreo. Precisely on social networks, criticism accumulated against the president, who has been seen on rare occasions with a mask.

Specifically, López Obrador wore a mask publicly in July 2020, five months after the arrival of the coronavirus in Mexico. On that occasion, the Mexican president used the mask on the plane that took him on a brief visit to the United States to celebrate the entry of the free trade agreement (T-MEC) with that country and Canada. 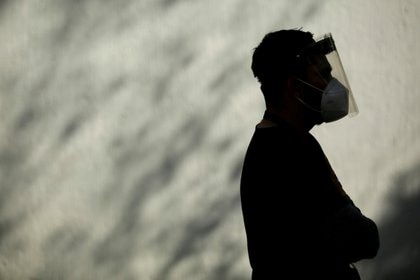 In Mexico, just over 166,200 people have lost their lives due to COVID-19 (Photo: José Luis González / Reuters)

More recently, last Thursday the Mexican president was seen wearing a mask walking through the interior courtyards of the National Palace , where he lives and works in Mexico City, accompanied by two collaborators. López Obrador greeted the person who identified him from afar while filming, while the president prepared his return to the public arena.

This Monday, on his return to his usual morning conferences after two weeks isolated for testing positive for COVID-19, López Obrador redoubled his stance against the use of a mask, which he had already refused to wear before becoming infected .

“Are you going to wear the mask?” Asked a reporter. “No, no, now in addition, according to what the doctors propose, it is no longer contagious,” replied the president, who reiterated his refusal after being reminded that Hugo López-Gatell, undersecretary of Health and anti-coronavirus czar of his government recommends its use even to those who have already received the vaccine.

“No, no, and I respect Dr. Gatell very much, and he is a very good doctor and has helped a lot to lead this process,” AMLO said.

Experts such as Javier Martín Reyes from the CIDE (Center for Economic Research and Teaching), assured that the use of the mask, even if it had no medical importance, is part of the prevention and control measures of COVID-19. “But, above all, because it would be a symbol of empathy, civic responsibility, and commitment to science. It is a tragedy that folly beats solidarity ”, he sentenced.