PROGRESO Yucatan (Times Media Mexico) – Yucatecan business groups continue to boost the economy and job creation in the state through investment projects such as the Yucalpetén Resort Marina real estate development. This project is expected to generate more than 2 billion pesos and create 2,000 direct and indirect jobs in the first stage alone.

Governor Mauricio Vila Dosal and the president of the Yucalpetén and Kaua Council, Jorge Carlos Montalvo Ferráez, with the mayor of Progreso, Julián Zacarías Curi, kicked off this plan that will contribute to consolidating the Yucatan port as an important tourist destination. The project will be developed in several phases until it is fully completed in the winter of 2025.

The master plan of the project, promoted by the joint efforts of the Kaua, Simca, and Desur Groups, considers the construction of 350 apartments in 4 residential towers, recreational parks, a hotel, beach club, a marina for 110 boats, and a commercial village of 3,500 rentable square meters. The complex will have a parking lot with 1,100 parking spaces, bars, restaurants, cafes, boutiques, ice cream parlors, and a yacht club. 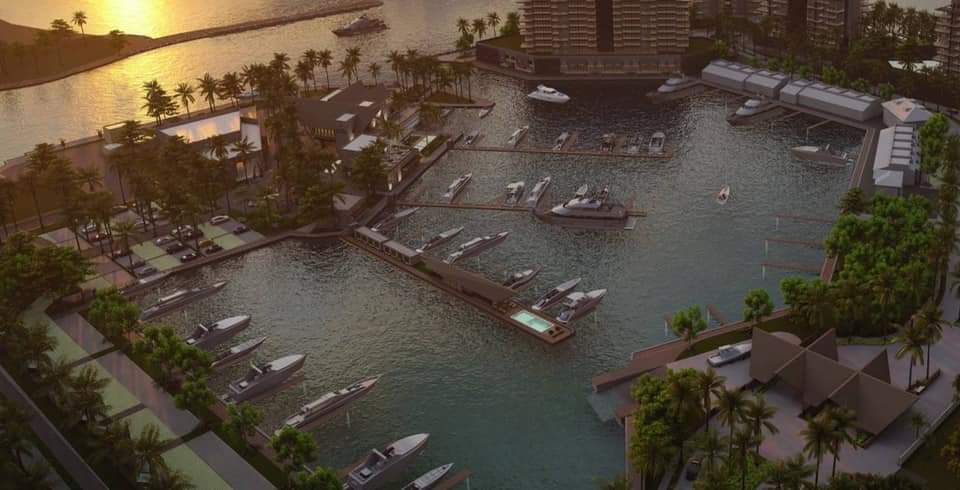 The investment will be more than 100 million USD., plus the hotel investment of 12 million USD. The first stage of this development is expected to be completed by the summer of 2023. It will include the Barlovento and Sotavento towers, the master plan, and the beach club and marina.

Montalvo Ferráez indicated that in 1968 the Yucalpetén project was launched on the tourist boulevard of the same name and where, at the end of the 1980s, a hotel was built. Before the end of that period, it closed after being almost destroyed by Hurricane Gilbert, never to open again.

The executive specified that this is an effort of Yucatecan businessmen who love Yucatan and want to see it progress and move forward. Montalvo highlighted the support and facilities that the State Government and the Progreso mayor have given to the business sector to face this unprecedented situation experienced in recent months due to the Coronavirus pandemic and the three storms and two hurricanes that impacted the state.

“We are business groups that have businesses in other states in the region, but in these difficult times, here in Yucatan, we have seen the State Government show a profile of mutual struggle and solidarity to move forward in the face of these adversities.” Montalvo Ferráez said to the reporters.

In his message, Mauricio Vila Yucatan’s Governor pointed out that in the most challenging year in the contemporary history of Yucatan, the people need two critical things: Health, which in this aspect his administration is working to take care of the Yucatecans, and work, which is fundamental to be able to get ahead, but he assured that these are not generated by the Government, but by the businessmen, who risk their money.

“We, as a government, are responsible for facilitating these investments, providing legal certainty and giving support, within what the law allows us so that you can carry out these projects. Without a doubt, this is a project that will revitalize the entire Yucalpetén area, but above all, it will contribute to planning Progreso and Yucatán, not for this year, not for next year, not for 2025, but the next 25 or 30 years” said Vila Dosal.

The Governor was accompanied by Erik Rihani González, from the Directorate of Fisheries Management of the Secretariat of Sustainable Fisheries and Aquaculture (Sepasy), and Michel Fridman of the Secretariat of Tourism Development (Sefotur). The Governor added that this development would revitalize this area, complemented by the rehabilitation and expansion works of the Yucalpetén shelter port, which will favor the entire fishing fleet.

The Governor announced that after the mayor of Progreso’s efforts, a stretch of about 300 meters of the Malecon would be intervened this year. In coordination with the City Council of Progreso, they will continue repaving streets and other works developed in the port. Among those, the Museum of the Crater of Chicxulub, which is nearing completion, improves urban infrastructure in Chelem, Chuburna, and Chicxulub Puerto.

Vila Dosal also mentioned the significant projects that are being promoted to take Yucatán into the future, among which he said the dredging of the deep-sea port, whose draft will increase from 9.5 to 15 meters, which will allow the arrival of large ships and, with this, the logistical cost will be cheaper.

In addition to this, we will also make the navigation channel wider, which will help not only more cruise ships to arrive but also larger ones with a more significant number of tourists. Today only ships that bring 3,000 or 4,500 cruise passengers can arrive. With this expansion, we will be able to receive vessels with up to 10,000 passengers, this means more jobs for the people of Progreso and more development for the entire interior of the state, for all the tours that leave, and this is the path we have to follow, said the Governor.

“We need to continue modernizing our port. Yucatan cannot stay the same. Yucatan has to modernize. It has to grow and move forward. And that brings many paradigm shifts, but the only development path is to move forward and into the future,” concluded Vila Dosal.