Mexico returns to the ‘dark’ times of the CFE

AMLO’s government and its regrettable campaign choice to reduce electricity consumption in the last week’s crisis take us back to Mexico from the ’70s.

In the second year of Luis Echeverría’s government, we were then in the long period of “stabilizing development” was coming to an end.

In those years of recalcitrant PRIISMO, blackouts were frequent. It was usual that the electric power would be interrupted at certain times of the year for several hours. “The power went out” was an expression that those of us who lived in those times heard frequently. 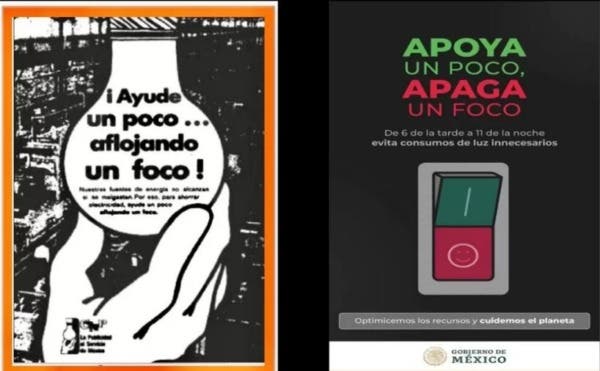 In the last few days, analogies and mockery were widely spread through social networks comparing the conditions of the Echeverrista six-year term with the current circumstances.

In 1972, the Federal Electricity Commission was headed by José López Portillo, who would be Echeverría’s successor. Subsequently, it was transferred to the Ministry of Finance. At that time, the phrase “finances are managed from Los Pinos” was coined, alluding to the President’s authority over the Secretary of Finance.

Mexico had a small, insufficient electrical system. The volume of energy generated was 31.5 gigawatts/hour. Today, generation is ten times higher. Currently, the growth in energy demand is not comparable to that of the 1970s. In that decade, growth was 137 percent, i.e., electricity generation was growing at 8.6 percent per year.

In the most recent decade, generation growth averaged 2.4 percent per year. Perhaps, this dynamic that the State-owned electric companies had back then is what makes President López Obrador and the CFE director, Manuel Bartlett, yearn to return to those times.

AMLO believes that by opening the electricity sector to private generation, the country lost sovereignty. By allowing companies to do business with electricity, the way was opened for electricity price increases. Domestic electricity service has been subsidized in Mexico for decades, so it does not reflect cost increases.

This is not the case of electricity for industry, which increased its prices even more, when there was no private participation. In the 1990s, the cost of high-voltage electricity grew at an average of 11.8 percent per year. In the first decade of this century, with private participation, the average annual increase dropped to 8.1 percent. And in the last ten years, the increase was 5.4 percent per year.

In that period, the CFE’s participation dropped from a virtual monopoly to 54 percent of the market. AMLO’s government wants to recover the lost ground, even though electricity, as in the past, is generated more inefficiently and its costs rise.

Since it is not possible to destroy the private investments in the sector made in the last 30 years, the aim is to prevent them from growing.

To the extent that the demand for electricity increases and its satisfaction comes mainly from the new generation by the CFE, the percentage of the state-owned company’s market will gradually increase.

The problem is that the state-owned electric company does not have the financial capacity to grow or invest sufficiently in generating new capacity and modernizing transmission infrastructure. If the Mexican economy were to grow at higher rates in the coming years, we would probably have unsatisfied demand and a condition in which we would face relatively frequent interruptions in the supply of energy and, of course, cost increases.

We will emerge relatively quickly from the crisis resulting from the suspension of gas shipments from Texas to Mexico.

From the crisis that may be generated by the lack of investment that will result from the reform of the electricity industry law, we will not get out of it soon, and we will likely have recurrent blackouts in the course of the next few years, in addition to increases in electricity costs.

Most domestic consumers will probably not notice this because there will surely be subsidies to prevent the higher cost of generation from being expressed in final electricity prices.

However, industry, commerce, services, among other sectors, will have to pay for more expensive electricity, and this will be another discouraging factor for productive investments if any were missing.

Perhaps, as in the times of Echeverría, what is the same is not only the publicity campaigns but also the inhibition of productive investment that public policies have brought about.