Merida’s bicycle lane. The project that some love and others hate.

The bicycle lane project in the city of Mérida has aroused all kinds of passions among the inhabitants. Some detest the project while others defend it.

MERIDA Yucatan (Times Media Mexico) – Not since the construction of the so-called “Paso deprimido” on Prolongación Montejo has an urban project caused so much separation and confrontation among the citizens of Mérida. On social networks, one can read messages of support, criticism, and insults against the bicycle lane project. 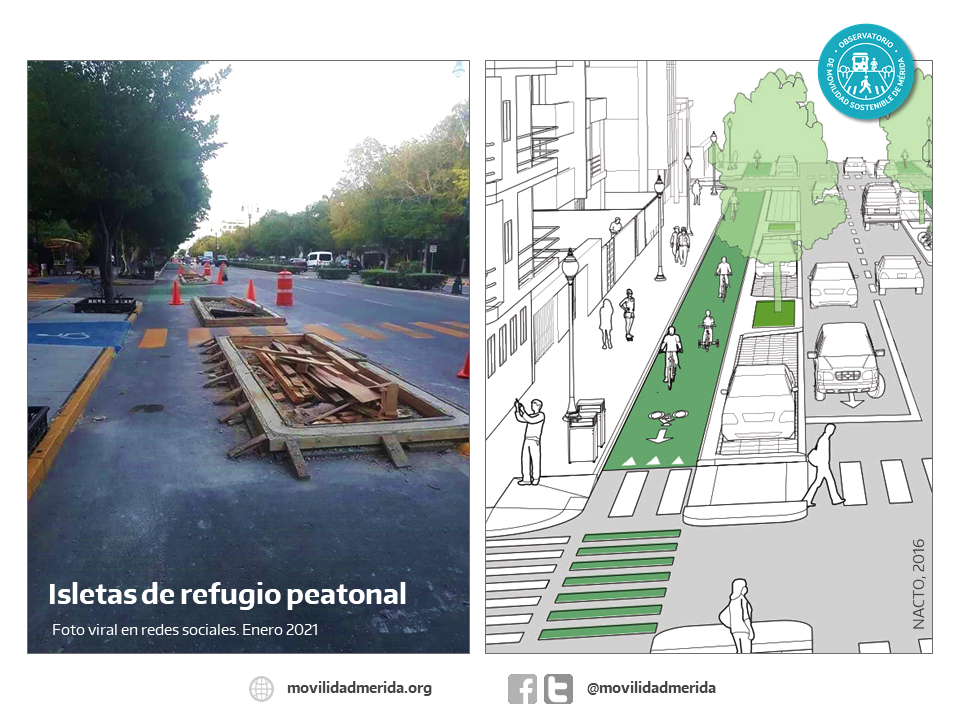 In an interview with the newspaper, “La Jornada Maya,” Aref Karan Espósitos, director of the Institute of Mobility and Territorial Urban Development (IMDUT), defended the project and said, “It is not an improvised project and guarantees the right to safe mobility.”
The reality is that to this day, few Meridanos know about the project in-depth, and there has been zero awareness campaign for citizens about its use. In March, the pilot test of the new bicycle lanes, which the government of Yucatan is building in four points of Merida’s city, will begin. Currently, the works are 70 percent complete.

Aref Karam states that contrary to what several sectors have opined, the project is not improvised. It has the endorsement of several experts and organizations -without naming them- it has been contemplated before in other projects. Such as the Integral Plan of Sustainable Urban Mobility, which also seeks to guarantee the constitutional right to safe, sustainable mobility and settle a debt with the population.

According to Karan Espósitos, the works of the Infrastructure Plan of Bikeways for Merida, which considers the construction of 71.7 kilometers of this type of road distributed in four zones of the capital Yucatan, are on time and should be finished in the first quarter of this year. Pilot tests will begin in March, he said. 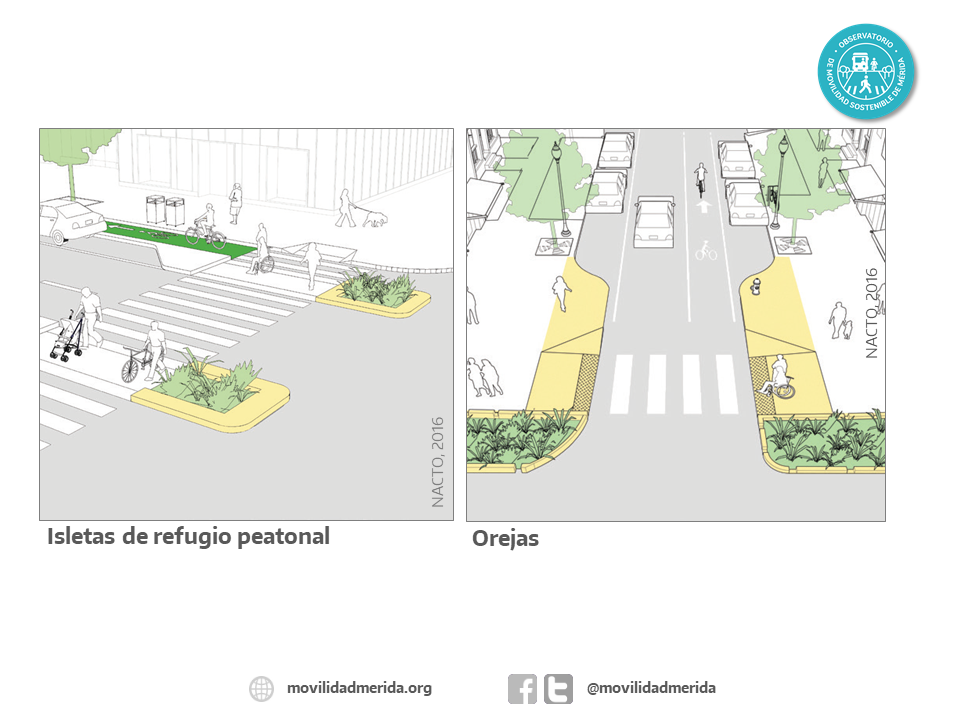 He detailed that the work is in a second stage, with 70 percent progress, the most advanced part is the one located on Paseo de Montejo with the Dzibilchaltún junction, where the pedestrian refuge islands and the yellow buoys have been placed; the section on prolongación Francisco de Montejo until reaching the periférico is still missing.
As for the other three areas: northwest of Mérida, Mérida-Ucú, and south of Mérida, he indicated that the spaces for the installation of the bicycle lanes are being delimited, separated with yellow buoys, determining where the lanes will be shared with the buses, as well as painting green lines to respect the spaces where there are parking spaces in the houses, but giving preference to cyclists.

He indicated that, soon, in these areas, shared lanes will be adapted, spaces where bicycles will converge with cars or trucks, which will be marked with triangles, which will be of lower speed, about 30 kilometers per hour, attached to the sidewalks because the vehicles are preparing to turn right or to enter their properties.

However, he specified that these lanes would only be compatible with buses with a frequency of 5 minutes and 7 minutes. As for the traffic islands and shoulders, he explained that, due to space constraints, these will only be built on Paseo Montejo and will serve to provide better visibility for drivers, since many vehicles park on the corners, which obstructs the view, forcing people to move forward, but interfering with mobility. 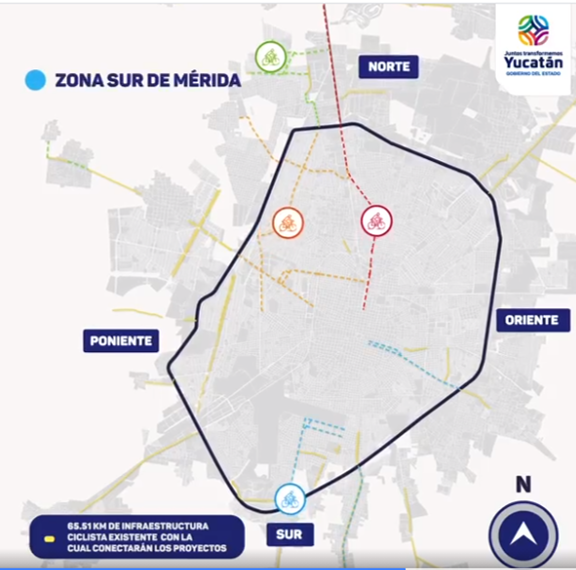 All the bicycle lanes will be intra-urban, which will interconnect to others already existing in the periphery of the city and its commissaries towards Mérida; with this, he added, we promote multimodality, that is, to be able to make a trip by bicycle, leave it in one of the 1,400 bicycle ports and board another means of transportation to reach your destination. In this way, he stressed, people save more and pollute less.

Aref Karan Espósitos, director of the Instituto de Movilidad y Desarrollo Urbano Territorial (IMDUT), believes that it is normal that, in the face of any change, resistance is generated by the citizens, mainly from those who think that their usual way of behaving in public spaces could be modified, especially with these new infrastructures that had not been applied in the city, but which put Mérida at the forefront in mobility issues.

According to the 2020 Population and Housing Census of the National Institute of Statistics and Geography, Yucatan is the State with the highest percentage of bicycles in its homes.

Given the lack of knowledge of what is happening, he said, great doubts have been generated, especially when it comes to an emblematic avenue such as Paseo Montejo. According to Karam, space will be taken away from cars, but mobility will be reordered: the two lanes will be preserved, and one for parking. “All these mechanisms, gradually, accompanied by an information and awareness campaign, will improve mobility, where everyone wins, but, above all, giving the bicycle space, it did not have.”
Public transportation in Merida.

To work properly and achieve sustainable mobility, the public transportation system, the routes, and the quality of the units must be improved: betting on a multimodal system. Otherwise, the bicycle lanes will not exercise their full potential. “The backbone of mobility in Mérida is public transportation. However, as long as it is not efficient, first quality, mobility will not prosper as we would like,” said Karam.
Indeed, in Merida, there must be a forceful reform to improve public transportation and force public transportation concessionaires to improve this service. If they fail to do so, their concessions should be taken away, or the State should regulate this, as is done in other parts of the country. The intention is good. The execution, we will have to see.

Yucatan has stagnated in this matter since, in the last ten years, it has been in the last place among the states that allocate federal resources to public transportation.